Commentary: More Kareem Hunt can only do Browns good 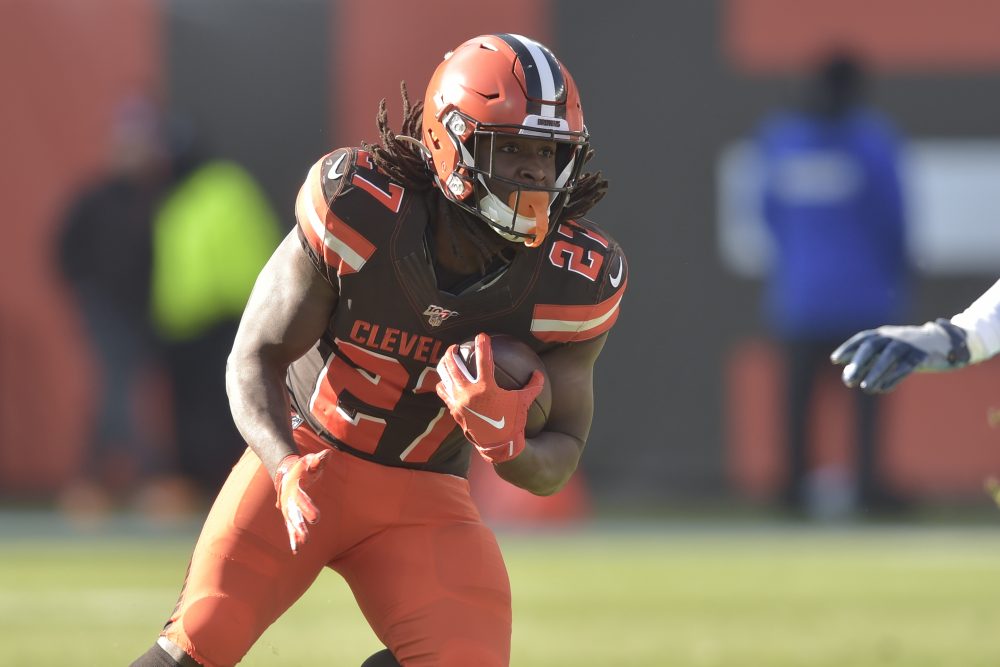 For those scoring at home, the Browns were 2-6 without Kareem Hunt, and they are 3-0 with him.

I’m no football doctor, but a good prescription for the remainder of this season for the playoffs-seeking Browns seems pretty obvious: more Kareem Hunt.

Could it be that there was nothing wrong with the Dawg Pound’s favorite team that couldn’t be cured by the activation of one of Cleveland’s favorite sons? Kareem has helped send the Browns careening through their last three opponents, outscoring those three losers by a combined margin of 81-47.

Hunt has only scored six of those 81 points, but that’s not his fault. He can’t carry or catch the football unless somebody hands it or throws it to him. Master offensive chef Sir Freddie Kitchens should probably keep that in mind.

On the other hand, more Kareem Hunt could mean less Nick Chubb, and nobody wants that. Chubb this season has a chance to become the first Browns running back in over 50 years — since Leroy Kelly in 1968 — to lead the NFL in rushing.

Chubb sits second in the league with 1,117 yards rushing, just 6 yards behind league-leader Christian McCaffrey. So there’s obviously nothing wrong with the Browns’ offense getting Chubby with it.

You might even argue, if you’re the arguing type, that in Hunt the Browns added another offensive weapon to a team that didn’t need it as much as it needed a clue on how to exploit the weapons it already has.

But as you’ve probably said to yourself numerous times while sitting on your mosquito-infested front porch at dusk on a hot August night: one can never have enough weapons.

Hunt is another player who has made a difference in his three games since being activated off the NFL’s bad boy list. Chubb’s ongoing lawnmowing of NFL defenses notwithstanding, chef Kitchens might want to consider ways to force opposing defenses to have to deal with more Hunt, but not less Chubb.

Because while Hunt may not be the featured back, he’s also not Fozzy Whittaker.

Too many times, it seems, the Browns will begin a possession with Hunt on the sidelines … for first down … for  second down, sometimes even third down. As a rookie with the Chiefs in 2017, Hunt led the NFL in rushing, but in the three games he’s played he’s only been on the field for about half of the Browns’ offensive snaps.

The actual number, according to Football-Reference.com, is 55 percent. Chubb, for the season overall, has been on the field for 72 percent of the offensive snaps. That figure dropped to about 70 percent in the three games since Hunt joined the team.

There’s another way to get the ball to Hunt — which would give opposing teams two headaches to worry about out of the Browns’ backfield, instead of just one — than merely handing it to him.

The ball can also be thrown to him, and the stats say it probably should be thrown to him more often. Hunt and Chubb are tied for the team lead (minimum 15 receptions) with a 75 percent catch percentage (receptions divided by targets). Granted, the routes run by backs out of the backfield are typically much shorter ones, with higher expected completion percentages than those thrown to wide receivers.

But there’s also this: Browns receivers have 16 dropped passes, the fifth-highest total in the league. Hunt, who doesn’t fumble, also doesn’t drop passes. If you hand or throw him the ball, chances are very good that when the play is over, he’ll still have the ball.

In 11 games last year with the Chiefs, Hunt caught 26 passes, and averaged 14.5 yards per reception. That’s more than Jarvis Landry (14.3) and Odell Beckham (14.4) are averaging per reception for the Browns this year.

So put Hunt in space, get him matched up with a linebacker, throw him the ball and enjoy the show.

In his two years with the Chiefs, Hunt scored 15 touchdowns in 27 games. In his three games with the Browns he’s scored one touchdown. He needs to score more.

Chubb and Hunt in the game at the same time would be a defensive coordinator’s nightmare.

Hunt standing on the sideline watching the game is a defensive coordinator’s dream.

Contact Jim Ingraham at [email protected] or [email protected] and follow him @Jim_Ingraham on Twitter. He’ll be signing copies of his new book “Mike Hargrove and the Cleveland Indians” at Books-A-Million in Cuyahoga Falls on Tuesday from 7-to-8 p.m. and at the Kent State University Bookstore on Wednesday from noon to 1 p.m.

Prediction: Browns 20, Steelers 13
Steelers 20, Browns 13: The breakdown — thumbs up, thumbs down, the matchups