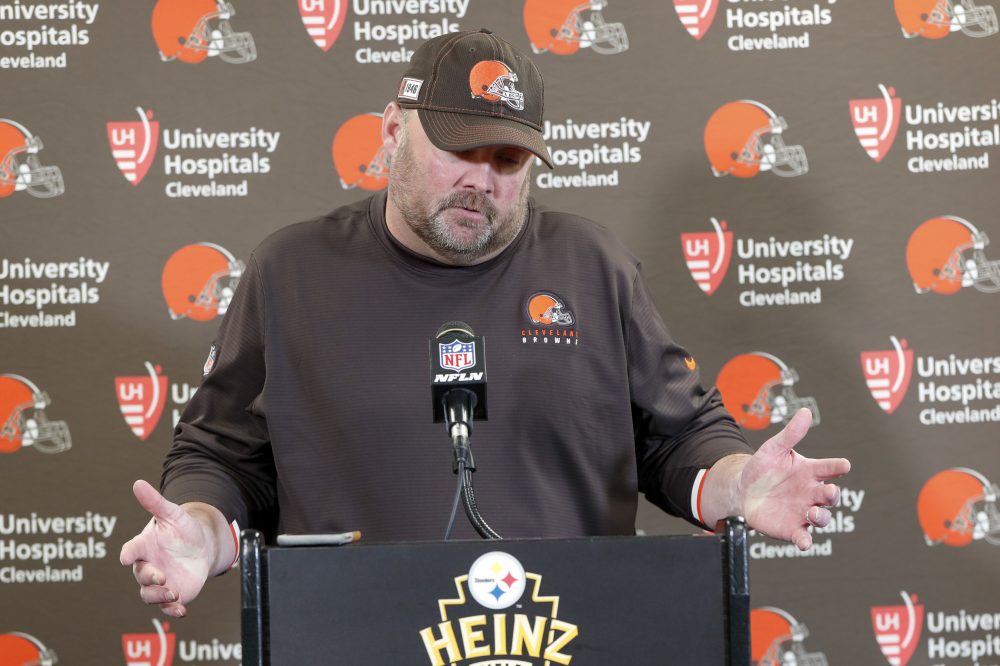 “I wore a T-shirt. I wore a jacket with it. My daughters wanted me to wear the shirt, and I’d wear it again,” Kitchens said Sunday after a 20-13 loss to the Steelers. “I put a jacket on. I covered it up. I took a picture with a fan. That was as simple as that.

Kitchens got a “Pittsburgh started it.” shirt from family for his 45th birthday Friday and wore it that night to see “A Beautiful Day in the Neighborhood,” the movie about Mr. Rogers. He posed for a picture with a fan, the shirt was visible under the open jacket and it became a story. The shirt refers to the end-of-game brawl in the Browns’ 21-7 win over the Steelers on Nov. 14.

“We all got to grow as professionals in some sense. I’m glad Coach T doesn’t do anything like that.”

Perhaps in response, some Steelers players arrived at the game in “Free Pouncey” shirts. Seven-time Pro Bowl center Maurkice Pouncey was suspended for two games for his role in the brawl and didn’t play. Cornerback Cameron Sutton wore a shirt with a cartoon Steelers player urinating on a Browns player.

But the story remained Kitchens’ wardrobe choice. After all, he’s a coach.

“I thought it was pretty stupid,” Steelers right guard David DeCastro said. “That’s a lot of bulletin board material. I don’t know why you do that as a coach. I just don’t get that. Of course, it’s going to motivate us. What are you thinking? It’s just not smart.”

“I don’t really have a comment for that,” quarterback Baker Mayfield said. “It’s just a T-shirt. I’ve done much worse.”

“Win, lose or draw, you’ve got to have fun with it,” defensive tackle Sheldon Richardson said. “We knew what type of game it was going to be coming into it and from the media standpoint I’m pretty sure he didn’t do anything to it. It was already hyped up to be this type of game.”

Garrett had been criticized by some for waiting until his appeal the next week to make the accusation that Rudolph vehemently denied.

Ogunjobi was also ejected from the first Steelers game, and suspended for last week’s game against the Dolphins.

“Very tough,” he said of the last couple of weeks. “It sucks being at home.

“I hate it that my dawg isn’t here. He’s holding up well, but he wants to be out there with us.”

“There’s no real way to replace a guy like Myles,” Mayfield said. “He’s just a one-of-a-kind athlete who can change a game.”

First, receiver Odell Beckham Jr. went eight games without a touchdown. Now he’s gone six without a 100-yard receiving performance for the first time in his six-year career, according to ESPN Stats & Info.

Beckham had three catches on six targets for 29 yards, barking at the Browns sideline after making a 19-yard catch in the fourth quarter. He and receiver Jarvis Landry (six catches, 76 yards) left the locker room before reporters were allowed to enter.

“I tried to call plays that worked. Tried to call plays to get him open,” Kitchens said of Beckham. “We played the type of game that we needed to play to come in here and win. Thirty of their 38 sacks happened at home, so you couldn’t get into a deal where you were dropping back and throwing the ball all about.”

Connecting on a consistent basis has been a problem for Mayfield and Beckham.

“It’s frustrating,” said Mayfield, who was sacked five times. “The types of plays we had drawn up require a little bit of time. We talked about it earlier in the week, they play well at home, that defensive front, and they did it again today. They made the plays when they needed to, so we weren’t able to get the ball down the field like we expected.”

“That’s between Damarious and I,” he said.

Rookie fourth-rounder Sheldrick Redwine made his first start in place of Randall, and undrafted rookie J.T. Hassell saw his first action on defense in certain personnel packages. Kitchens said not having Randall wasn’t a factor on the deep completions by the Steelers.

“Well, a middle safety’s not going to do any help,” he said. “They threw the ball down the middle of the field one time, and Redwine was there and made a good play on the ball and got the ball out. Middle field safety’s not making those plays on the sideline. They were throwing at our corners.”

Richardson was checked for a concussion in the second quarter after sliding headfirst into a sideline heater. He was cleared to return.

“I wasn’t dizzy or nothing. Just felt a little burn in the shoulder and honestly just kinda mad I was missing the rest of those downs,” he said. “I was trying to hit someone really hard, and I slide 5 yards.

** Rookie cornerback Greedy Williams left in the fourth quarter with a shoulder injury.

** Tight end Demetrius Harris had a large wrap on his right shoulder after a hard fall that dislodged a potential touchdown catch in the fourth quarter.

“Terrible,” he said of the shoulder. “I had a rough two weeks, man. My neck, and my shoulders, I’ll be fine.”

He said he felt like he’d be able to play next week against the Bengals.

Defensive end Olivier Vernon was active and started after missing three straight games with a knee injury. He had a tackle and a quarterback hit.

** Justin McCray started at left tackle in place of Greg Robinson, who was ruled out Saturday with a concussion.

** Defensive end Chris Smith was a mild surprise as an inactive. Bryan Cox, who was signed Nov. 13, has moved ahead of Smith in the rotation.

Austin Seibert made 31- and 34-yard field goals, giving him 82 points on the season, the most by a Browns rookie in history.