Steelers 20, Browns 13: The breakdown — thumbs up, thumbs down, the matchups 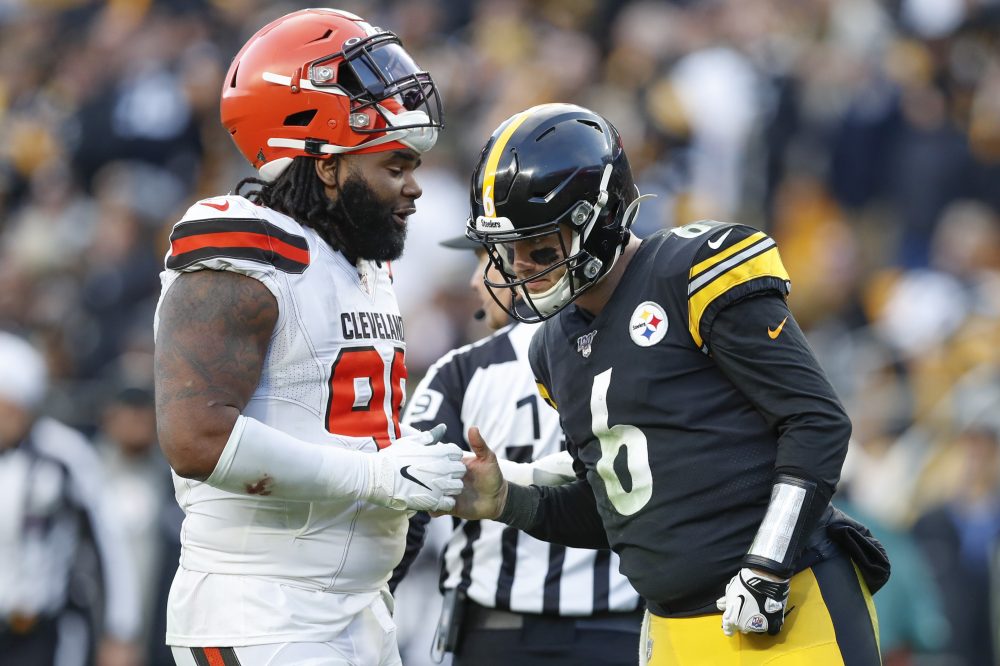 “I think (No.) 6 in the backfield just settled down a little bit and brought the game into his own,” Richardson said. “He made some great throws, perfect placements for the ball and for his teammates to catch the ball and kudos to him.”

Hodges was undrafted out of Samford in the spring and is only playing because Ben Roethlisberger got hurt and Rudolph stunk. If Hodges plays like he did Sunday, the Steelers will have a chance to finish an improbable run to the playoffs.

“I thought he played his tail off,” Tomlin said.

The journeyman was put in a tough spot. He’s a natural guard and undersized to play the premium position protecting the quarterback’s blind spot.

He didn’t handle it well.

Steelers outside linebacker Bud Dupree dominated their one-on-one matchup, totaling six tackles, 1.5 sacks, a pass defensed and a forced fumble of Baker Mayfield that ended a third-quarter drive. Dupree also got close enough to Mayfield at the end of the first half for Mayfield to bruise his throwing hand on Dupree’s face mask on his follow-through.

Outside linebacker T.J. Watt also beat right tackle Chris Hubbard for a sack and was unblocked for a big hit on Mayfield.

“If you can run the ball, it slows ’em down a little bit,” left guard Joel Bitonio said. “When you have to pass the ball to try and come back, they pin their ears back and try and get after you.”

The Steelers have 35 of their 43 sacks at Heinz Field.

PLAYS OF THE GAME

The Browns were handed a golden opportunity trailing 20-13 in the fourth quarter. Hodges threw a pass down the left sideline but receiver Diontae Johnson stopped. Cornerback Terrance Mitchell made the easy interception and returned it 28 yards to the Steelers 30 with 7:18 left.

The next five plays sealed the Browns’ fate.

Mayfield threw a corner route to receiver Jarvis Landry down the left sideline and dropped the ball into his hands. But cornerback Mike Hilton was able to pry it loose.

“We tried taking a shot after Terrance’s interception. Almost had a great play,” Mayfield said. “Jarvis has come down with those before, but it’s a tough play. It’s not a routine play for anyone.”

On second down, Mayfield threw short for running back Kareem Hunt for no gain. Mayfield was sacked on third down, but all was not lost. The Browns lined up for a field goal, and kicker Austin Seibert pooched a punt that was downed at the 1-yard line, which withstood a challenge from Tomlin. A false start moved the Steelers a half-yard closer to the goal line and had Browns fans thinking safety.

No such luck. Benny Snell Jr. ran up the middle for 11 yards on first down.

Chance squandered in a brutal sequence.

Team in last decade without a four-game winning streak, according to ESPN Stats & Info. The Browns had won three in a row before Sunday, and their last four-game streak was to end 2009.

Consecutive third downs the Browns failed to convert to end the game. They started 4-for-6 before going 0-for-6, including 0-for-4 in the second half.

“I’m sure it did. Extra juice — you call it what you want. I call it better game-planning. You know? We did a little too much as far as our stunts and stuff.” — Defensive tackle Sheldon Richardson, on if the brawl Nov. 14 provided extra incentive for the Steelers

** “Just gotta win. Win out and see what happens.” Defensive tackle Larry Ogunjobi on the remote playoff chances at 5-7

The Browns couldn’t sustain the hot start, and the line couldn’t hold its blocks to allow Baker Mayfield to throw downfield. Odell Beckham Jr. was a non-factor.

Quarterback Devlin Hodges showed moxie, and the Steelers killed the Browns with deep throws down the sideline.

The Browns couldn’t hold a 10-0 lead. They didn’t pressure Hodges and didn’t cover well on the corners.

The Steelers got a fumble and an interception and sacked Mayfield five times. Cornerback Joe Haden sealed the win with a diving pick.

Austin Seibert was 2-for-2 on short field goals and pooched a punt to the 1-yard line. The rest of the special teams was a disaster. Tavierre Thomas muffed a kickoff, Jamie Gillan shanked a punt and the Steelers had a pair of nice returns.

Whether it affected the game or not, Freddie Kitchens set the wrong tone with his controversial T-shirt choice Friday. He said he had his team ready to play, but he didn’t have them ready to finish.

Mike Tomlin continues to work miracles with a roster decimated by injuries.

Commentary: More Kareem Hunt can only do Browns good
Commentary: Shirts happen, but Freddie Kitchens proving to be a bad fit for this Browns team