Commentary: Shirts happen, but Freddie Kitchens proving to be a bad fit for this Browns team 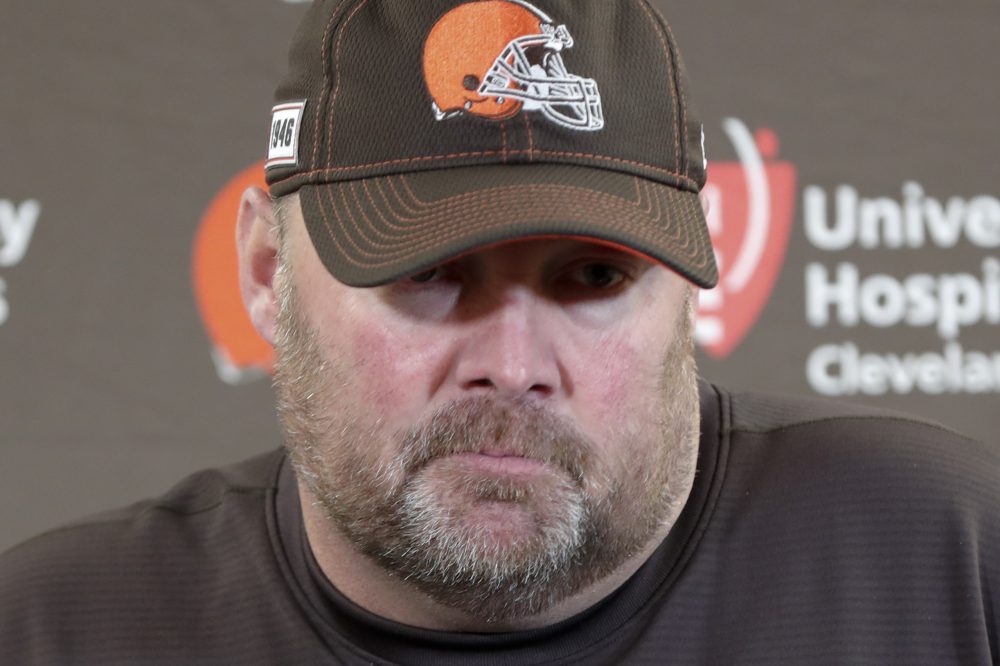 If Freddie Kitchens is destined to become the Cleveland Browns’ first one-and-done head coach since Rob Chudzinski — not to be confused with two-and-dones Mike Pettine, Pat Shurmur and Eric Mangini, or two-and-a-half-and-done Hue Jackson (and that’s just in the last 11 years) — the tipping point probably came Sunday, in Pittsburgh, in a football stadium named after a food processing company.

It was there that the flickering playoff hopes of the NFL’s most undisciplined, underachieving team, as well as, perhaps, Kitchens’ hopes for a second term, went stone cold.

Unlike those heady summer days of yore, nobody is talking Super Bowl now. A division title? Sheer folly. A wild card? Crickets. Beating the Steelers twice in one season for the first time in 31 years? Crickets with laryngitis. A winning season? Meh.

Cleveland’s season, the future of its head coach and even the judgment of its revered general manager have taken a major hit in the wake of the Browns’ listless loss in Pittsburgh, 20-13, to a mediocre Steelers team that even in an off year displays more leadership, cohesiveness, professionalism and good old-fashioned want-to than their noisy, unfocused, undermotivated pigskin neighbors in Ohio.

Sunday, halfway through their most important game of the season, the Browns simply lost interest. Their quarterback, the No.1 overall pick in the 2018 draft, was outplayed by an undrafted third-stringer whose biggest claim to football fame seems to be his nickname: “Duck.”

Pittsburgh’s offensive and defensive lines dominated their counterparts from Cleveland, the Steelers receivers physically overpowered the Browns defensive backs and the Browns just stood back and let it all be. Pittsburgh’s coach, during the game and the week leading up to it, carried himself like an NFL coach should. And the way his team played reflected that.

The Browns, meanwhile, went out and played like the team of a coach who … well, let’s just say Freddie Kitchens has had better weeks. Not many. But a few. This was not one of them. Spectacularly so.

Starting with that T-shirt.

No, the Browns didn’t lose Sunday’s game because Kitchens wore it. But the T-shirt thing is a really big deal going forward, because it raises a serious red flag regarding his judgment and his sense of leadership. There’s even a regrettable degree of clueless arrogance about it.

That he chose to wear it, in public, photograph that fact, then almost defiantly state that he’d wear it again should be all kinds of red flags furiously flapping in the unflappable face of John Dorsey.

Like most colossal blunders, this one could have been easily avoided. Here’s only a partial list of how:

If you do, don’t go out in public.

If you do, don’t take a picture.

If you do, zip up your jacket.

Freddie went 0-for-4, but he still could have salvaged the situation by throwing himself on his sword, or, as it were, his T-shirt, by saying it was a grievous lapse in judgment and a mistake to wear it (which basically made light of an incident that led to multiple Browns players being fined and suspended, and forced Kitchens to play the Browns’ most important game of the season without the team’s best defensive player).

Other than that, no harm, no foul, right?

Instead, Kitchens did none of the above, then fairly gloated about it afterward, which again raises questions about his management style, as if the Browns’ spotty win-loss record with an underachieving though star-studded roster, lowlighted by two losses to teams starting third-string quarterbacks, hadn’t already done that.

This episode of a weekend at Freddie’s does nothing but raise even more questions about whether the perceived Mr. Right is actually Mr. Not Even Close. It also causes arched Dawg Pound eyebrow gazes to shift from Kitchens to the man who hired him.

Folksy Freddie seemed like an eminently likable, root-able chap when he was hired as the newest best hope to coach the NFL’s bad news franchise. It was not a high-profile, glamorous hiring. To the contrary, it was as if Dorsey hired someone out of the Dawg Pound to come down and coach the team.

Dorsey went with his gut, and it’s led to a gut punch.

If Kitchens is a swing and a miss by Dorsey, and nothing that’s happened this season generally, or in the last few days specifically, suggests it’s anything but, that’s a huge miss by a general manager who, since being hired himself, seemed to be the loading dock foreman at Bull’s-eyes ’R Us.

Maybe this is what happens when you hire a rookie head coach, with the star power of a long snapper, to lead a diva-heavy roster.

Or maybe it’s a lesson that Dorsey had previously learned and hoped not to experience again … but here it is:

Sometimes when you swing for the fences, you dribble one back to the mound.