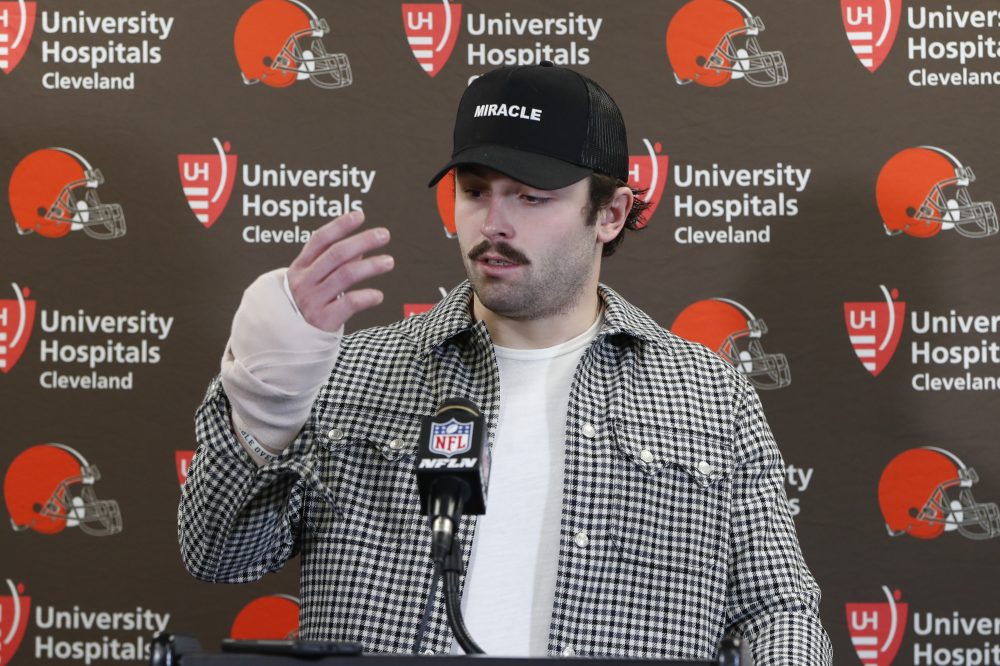 Coach Freddie Kitchens declared Mayfield good to go this week after he banged his right hand on a helmet late in the first half Sunday during the 20-13 loss at Pittsburgh.

“Baker should be fine this week,” Kitchens said Monday.

Mayfield had X-rays at halftime and they came back negative, allowing him to play the second half. He wore a white glove — he wasn’t sure he’d ever worn one in a game — but said it didn’t affect him.


The news stayed positive Monday, and Kitchens expects Mayfield to practice in preparation for a visit from the Bengals (1-11) on Sunday.

“Yeah, I do. I think Baker does a good job of compartmentalizing through pain and getting to the game healthy,” Kitchens said. “He’ll be at practice and he’ll get his work done this week. He doesn’t like to miss practice.”

Mayfield must work to fix the turnover problem that returned in the second half Sunday. He lost a fumble in the third quarter to set up a Steelers field goal and threw an interception on his final pass with 1:17 left to end the comeback bid.

Mayfield, the No. 1 pick in 2018, has thrown 14 interceptions, compared to 15 touchdowns, and lost two fumbles this season. He had only one turnover over the previous four games.

Seven of the interceptions have come in the fourth quarter, including four with the Browns trailing in the final four minutes. His only touchdown in crunch time was the winner against the Bills with 1:44 left.

Mayfield ranks 38th in the NFL with a 51.9 fourth-quarter passer rating, ahead of only Carolina’s injured Cam Newton and Miami’s benched Josh Rosen. Mayfield’s completed 53.8 percent with three touchdowns and the seven picks.

For the season, he’s last among 33 qualifying quarterbacks with a 79.9 overall rating and 60 percent completion rate.

Mayfield said after the game he was “just a little bit off” on the throw down the right seam for receiver Jarvis Landry that was intercepted by former Browns cornerback Joe Haden. Landry, who angled the route to the inside as the pass sailed behind him, and quarterbacks coach Ryan Lindley got into a heated exchange on the sideline, with injured captain Christian Kirksey stepping between them.

“Anytime you have a big play like that in a game, the first thing people want to point to is miscommunication and stuff like that,” Kitchens said. “We are going to continue to work hard on our communication in those critical moments.”

He downplayed the sideline confrontation.

“Our guys put a lot into this game so anytime you see it not happening or unfolding the way you want it to unfold, of course, there is going to be passion and stuff that is exuded out. That is understandable. That is what makes Jarvis such a special player.”

Mayfield’s injury occurred on a play that started with 16 seconds left in the first half. Mayfield threw an incompletion deep for receiver Odell Beckham Jr., and on the follow-through his hand hit the face mask of outside linebacker Bud Dupree. Mayfield grabbed the base of his right thumb near the palm and headed directly to the sideline. He then ran to the locker room for X-rays.

Garrett Gilbert threw two incompletions to finish the half.

“Hit the face mask obviously with a little bit of speed and force on that. Trying to throw a long ball,” Mayfield said after the game. “The X-rays were negative, so that’s good news. Just got a little numb, took some medicine and went back out there, so we’ll see.”

On his way out of the locker room for the third quarter, Kitchens told CBS sideline reporter Evan Washburn the coaches were preparing Gilbert to play the second half. Kitchens hadn’t received the results of the X-rays.

“We got the X-rays somewhere in between the time that I left the locker room to go to the field and me getting to the field,” he said.

Mayfield finished 18-for-32 for 196 yards, a touchdown, an interception and a 71.9 passer rating. He was sacked five times and lost a fumble.

He was 8-for-15 in the second half with 98 yards, the interception, fumble and four sacks.

Kitchens didn’t think Mayfield will have to continue to wear the glove.

“We’ll see moving forward, but I don’t think so,” he said. “I don’t think the glove had any impact on the way he threw the ball.”