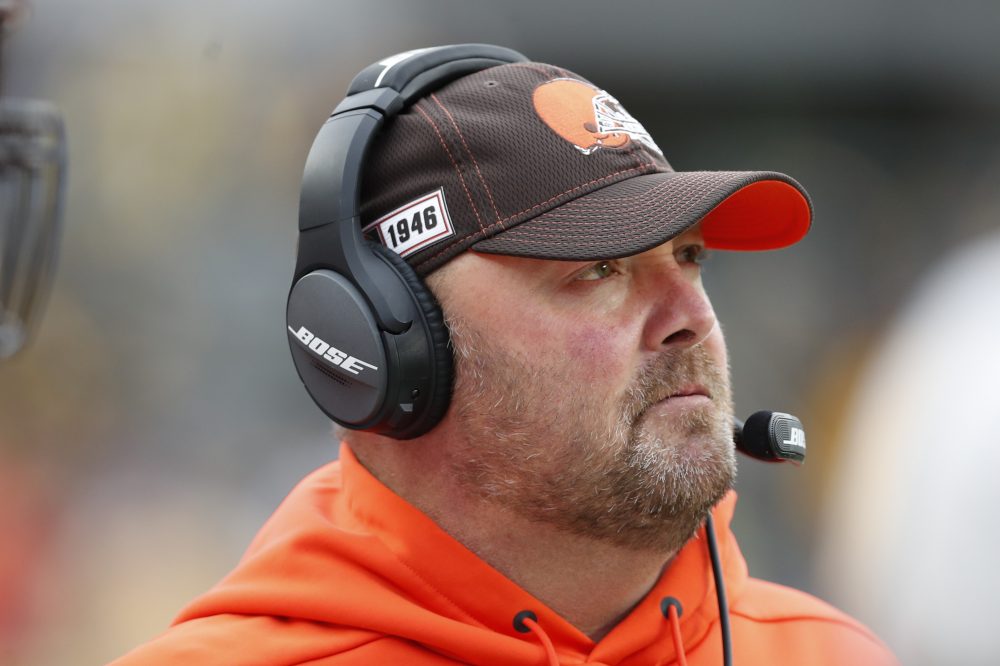 BEREA — Freddie Kitchens put a twist on Cleveland’s all-too-familiar refrain of wait until next year.

“The next time we are in that situation, I expect us to respond better,” he said Monday.

The Browns were still processing the 20-13 loss to the Steelers on Sunday in Pittsburgh. It dropped the Browns to 5-7, wiped out any chance of winning the AFC North and all but eliminated their shot at a wild card spot in the playoffs.

Kitchens’ growing pains as a first-time head coach have been obvious. He reminded everyone his roster may be long on talent but it’s short on big-game experience.

The Browns started great, taking a 10-0 lead midway through the second quarter. The offense had scored on two of three drives, and the defense had allowed 9 yards in two Pittsburgh possessions.

“Everybody felt we should have run away with this game,” said running back Kareem Hunt, who had a 15-yard touchdown catch in the second quarter.

Then the mistakes started, the offense stalled, the defense stopped getting stops and the momentum switched sidelines. The Steelers scored the next 20 points.

“They did a good job after the first quarter of answering with their intensity, and we did not do a good job of matching that intensity,” Kitchens said. “I am not sure what happened to us from a mental standpoint, but just little things here and there started showing up. We did not make plays. It is as simple as that.”

Steelers players said after the game they were shocked Kitchens wore a “Pittsburgh started it.” T-shirt to the movies Friday night.

“I thought it was pretty stupid,” right guard David DeCastro said. “I don’t know why you do that as a coach. Of course, it’s going to motivate us.”

“If that is what they take as motivation, of course, I am disappointed,” he said. “They are motivated by more than just a T-shirt. We had a lot on the line there for that game, and I do not think that T-shirt put them over the top. Now that is being strictly honest for you.”

The wardrobe malpractice followed by the crucial loss to a short-handed Steelers offense led by undrafted rookie quarterback Devlin Hodges inspired more criticism of Kitchens. The questions about his future were quieted during a three-game win streak, but he was asked again Monday if he’s concerned about his job security.

His focus was on learning from the meltdown.

Kitchens’ main source of frustration was the inability to make plays at the most important times.

The offense failed to tie the game after being given the ball at the Pittsburgh 30-yard line after a Terrance Mitchell interception return. The defense gave up several deep passes and couldn’t keep the Steelers pinned deep after they started a fourth-quarter drive inside the 1. And the special teams performance included a muffed kickoff and leaky coverage.

“I have said for a long time now you have to understand when the game can be won and then take advantage of those situations, and we had several opportunities and did not make those plays.”

The offense had the ball just once in the second half before the Steelers took a 20-10 lead with 13:51 left in the game. Kitchens called a run on the first play of the next drive, then eight straight passes.

When the Browns got the ball back after the Mitchell interception trailing 20-13 with 7:18 left, Kitchens called three more passes. The result: two incompletions and an 8-yard sack that pushed them out of field goal range.

Hunt went to the postseason with the Chiefs as a rookie in 2017 and knows what a playoff team looks like.

“Honestly, the difference is the teams who want it done never get down on themselves,” he said. “Bad things happen and they just move forward. It isn’t always going to be pretty or perfect. It’s never going to be perfect, but as long as we executed and got the job done, that’s all that matters.”

Do the Browns have that attitude, or are they too inexperienced?

“Sometimes I think like we do,” Hunt said. “I don’t know. Sometimes we don’t.”

The Browns have treated the past four games like the playoffs, knowing they needed to win each one. Despite the playoff hopes being almost extinguished, Kitchens believes his players will keep the same focus.

“These guys invested a lot into getting back to the point to get us to where this game even meant anything,” Kitchens said. “Moving forward, we are going to do the same thing because I know this, we have a zero percent chance unless we take care of what we can take care of, and that is just to go 1-0 this week.”

Sheldon Richardson says “times are changing” in rivalry with Steelers, and “it’s time for a new captain”
Cornerbacks go on attack, try to rebound from long day in Pittsburgh