Notes: Freddie Kitchens says safety Damarious Randall will return this week after being benched vs. Steelers 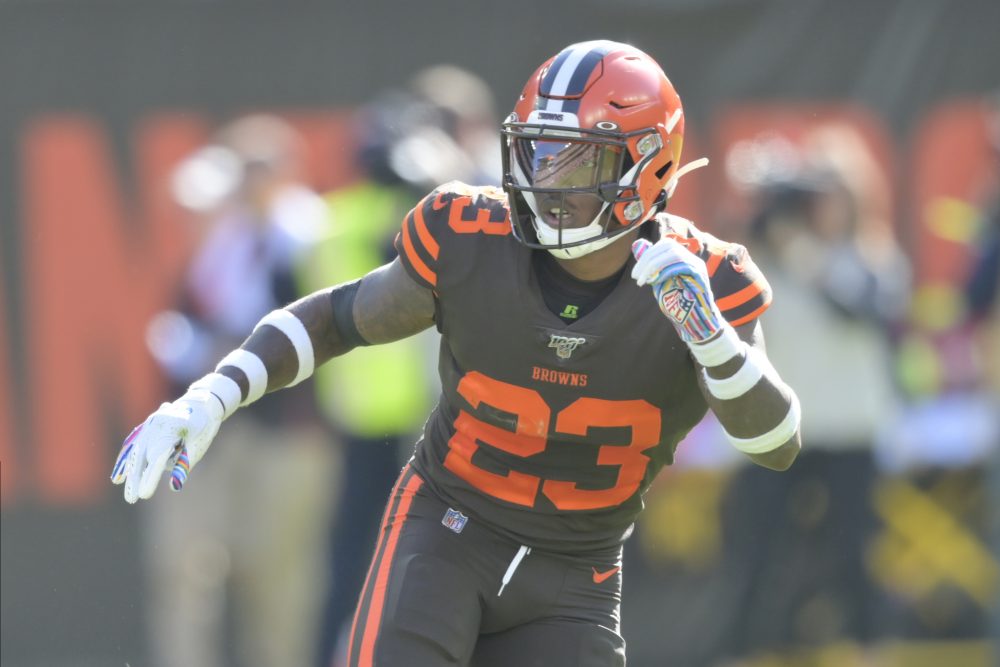 BEREA — The benching of free safety Damarious Randall was a one-week punishment.

Coach Freddie Kitchens didn’t allow Randall to travel to Pittsburgh for the pivotal matchup, and the Browns lost 20-13 Sunday. The plan is for him to play this week against the Bengals at FirstEnergy Stadium.

“His status going forward is he will come back this week and I am assuming we will do everything we need to do to be on the field,” Kitchens said Monday.

ESPN reported Randall skipped a practice last week, but Kitchens wouldn’t address the reason for the discipline. Randall wasn’t in the locker room during the period open to reporters.

Randall was at practice Wednesday and Friday during the early portions open to reporters. He watched the starters go through drills Friday.

Practice on Thanksgiving was closed to reporters, and Kitchens wouldn’t answer when asked if Randall participated. He wasn’t listed as absent on the official participation chart submitted to the league.

“Listen, ask Damarious. What Damarious and I talk about is going to stay between Damarious and I,” Kitchens said. “I made a decision. We are living with that decision. I have 52 other guys to think about.”

Randall has started all seven games he’s played this year, missing two with a concussion and two with a hamstring injury. He has 34 tackles, two sacks and four passes defensed.

Kitchens was asked if Randall, 27, would have to earn back his trust.

“Damarious has my trust. It has nothing to do with trust,” he said. “I trust these guys as long as they show me they can be trustworthy. So moving forward, I do not have a problem with Damarious.”

Rookie fourth-round pick Sheldrick Redwine made his first start in place of Randall, joining Juston Burris as the first-team safeties.

“Redwine did an excellent job in the middle of the field and so did Burris,” Kitchens said.

Undrafted rookie J.T. Hassell filled in on the three-safety package, playing 16 snaps in the first defensive action of his career.

Receiver Odell Beckham Jr. caught three passes on six targets for 29 yards. He had back-to-back two-catch games in Weeks 4 and 5 and has gone six games without a 100-yard performance.

After a 19-yard catch Sunday along the Browns sideline, he looked toward the bench and yelled twice.

“I certainly did not hear anything, but Odell has done a good job of keeping his emotions in check,” Kitchens said. “I want him to play with passion on the field. I want him to get balls, too.”

Kitchens and quarterback Baker Mayfield said the game plan called for deep attempts to Beckham, but the protection failed to give Mayfield the necessary time.

“There were a couple of opportunities there but, yes, our plan was to hit him down the field more. We could not hold up as much,” Kitchens said. “We did not think we would have all day, but we thought we could pick and choose. You still have to continue to try to throw the ball down the field, even whatever the rush, so we had some chips and stuff that we would have been able to get it off. I always want Odell involved more.”

“The biggest difference between the first time we played them and the second time we played them is on all of those 50/50 balls, they were about 100 percent,” Kitchens said. “We have to do a better job of playing the ball. Those guys understand that.

“I would like for them to attack the ball a little more and play the football when it is in the air more.”

Rookie linebacker Mack Wilson said the defense can’t afford to give up so many big plays.

“We have to knock the ball out and try our best to do whatever we can to live to play another down,” he said.

** Williams left the game in the fourth quarter with a shoulder injury.

“He should be good,” Kitchens said. “He is still being evaluated right now.”

** Defensive end Olivier Vernon (knee) started after missing three games but played only 12 of 62 snaps and didn’t have his normal burst.

** The Chiefs signed defensive tackle Devaroe Lawrence to the practice squad Saturday. The Browns cut him Tuesday after he had played 11 games with two starts.