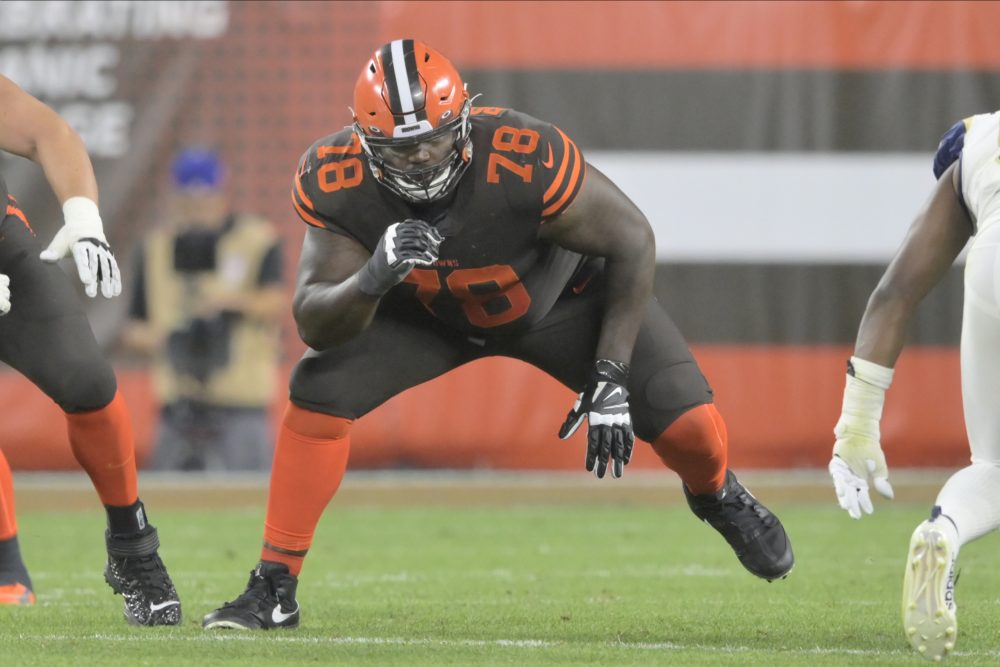 BEREA — Left tackle Greg Robinson was cleared from the concussion protocol and returned to practice. He didn’t play against the Steelers, and Justin McCray struggled in his place.

On the downside, right tackle Chris Hubbard and center JC Tretter didn’t practice with knee injuries. Both played all 69 offensive snaps against the Steelers, although Tretter was hobbled in the second half.

“JC toughed it out through the game. Proud of him,” Mayfield said. “Obviously we came up short, but he showed his toughness. Having Greg back should be great for us. We trust obviously whoever we put in there, but Greg’s presence adds a different dynamic.”

Tretter hasn’t missed a snap since he signed with the Browns in 2017. He played through a painful high ankle sprain for much of last season and expects to be on the field Sunday against the Bengals.

“Do some work on it, and then try to rest it up and I’m sure I’ll be feeling fine by the time Sunday rolls around, but it’s just a long season,” he said. “You get banged up and rolled up on and stuff happens and you just have to kind of manage it, and we’ve been through worse last year so we’ve got a good plan and we’ll be all right.”

Hubbard, who played every snap last year, missed Week 3 against the Rams with a foot injury. If he can’t play, he’d likely be replaced by Kendall Lamm.

Defensive end Olivier Vernon returned to the lineup Sunday after missing three games with a knee injury. He was limited to 12 snaps and didn’t have his usual burst but was able to practice again Wednesday in a limited capacity.

Kitchens said he came through the game “good.”

“Little sore, but we will continue to see what he can do during the course of the week and continue moving forward with it,” Kitchens said.

** Defensive back Eric Murray returned to practice for the first time since knee surgery Nov. 1. He’s missed the last five games, was limited Wednesday and could be a week away from playing.

** Rookie cornerback Greedy Williams (shoulder) and tight end Demetrius Harris (shoulder) were limited after getting injured in the fourth quarter Sunday. Williams was hurt making a tackle but said he’s good to face the Bengals.

** The Browns listed 17 players on the injury report.

Steelers center Maurkice Pouncey returned from a two-game suspension and didn’t apologize for punching and kicking Browns defensive end Myles Garrett while he was on the ground during the Nov. 14 brawl.

“At the end of the day, the fight didn’t look good, but the fight was worth it,” said Pouncey, who came to the defense of quarterback Mason Rudolph, whom Garrett hit on the head with a helmet. “No regrets. I’ve moved on now, man. Everyone had to pay their fines. Everyone had to do their due diligence. The money was worth it, trust me.”

Pouncey, who was fined $35,096 and forfeited $117,647 in salary, rebutted Garrett’s accusation that Rudolph called him a racial slur.

“Come on, man, that’s not true at all,” Pouncey said. “Trust me, if he was racist, it would’ve got exposed.”

For the last two weeks, tight end David Njoku said he felt great and was ready to play after missing eight games with a broken wrist. Kitchens said Njoku is “getting closer” but wants to be certain before he’s activated from injured reserve.

“We just want to make sure that he’s ready to go,” Kitchens said. “That’s all because there’s no half-stepping it. Once you’re at the game from that spot, he has to play.

“You’re limited on how many guys you can have at the game, so you need to make sure he can do all the things that he needs to do, not just in one area, but in all areas, especially at that position.”