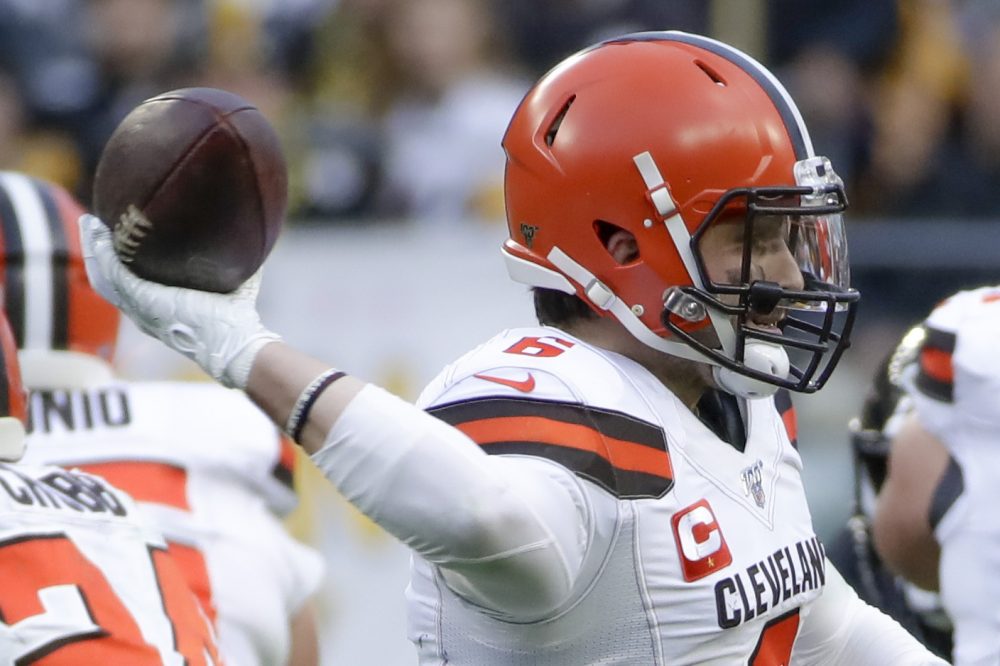 BEREA — Not the 5-7 record, the lack of key completions to Odell Beckham Jr. or the 14 interceptions, including seven in the fourth quarter.

“In my mind we’ve got the right guy going forward,” Monken said Thursday.

Mayfield resumed throwing, was a full participant in practice and is on course to start Sunday against the Bengals after bruising his right hand in the 20-13 loss to the Steelers. He had the bottom of his right hand and thumb wrapped and is also dealing with sore ribs.

Mayfield was the No. 1 pick in 2018 and lived up to the draft status right away, completing 63.8 percent for 3,725 yards and an NFL rookie-record 27 touchdowns. His second season has been a struggle.

He got off to a rough start, recovered for a five-game stretch coming out of the bye, then committed two second-half turnovers Sunday in the devastating loss at Pittsburgh.

The locker room and organization haven’t wavered in their support, and Monken said the numbers misrepresent the player Mayfield is and the potential he has.

“There’s no doubt. Any statistical evidence you have of any area you want to look at has its holes,” Monken said. “Obviously we’ve got to do it collectively as a group better, but I think he’s a tremendous, tremendous football player, competitor, smart, tough, has a rare competitive quality and rare want to be great. That’s a thing that I think is going to continue to push him and for him to push the rest of our offensive group. There’s been some moments where we haven’t played as well around him, we’ve gotten behind a little bit and he’s competitive.”

Turnovers have been a problem for Mayfield, who threw 14 interceptions in 14 games last year. He threw three interceptions in the opening 43-13 loss to the Titans this season and had at least one a game until a clean three-game stretch last month. He’s also lost two fumbles, including one in the third quarter Sunday to set up a Steelers field goal.

“Over his career, I’ll be stunned if he’s a guy that turns the ball over a lot,” Monken said. “He doesn’t have that in him. He does not. He’s not careless with the football.

“One of his interceptions is a shovel pass at New England, for God’s sakes. That’s not his fault, it’s our fault, my fault for the way we designed it and the way it turned out.”

Mayfield is still looking for a game to define his season. He threw a winning touchdown against the Bills with 1:44 left, but that’s been overshadowed by four interceptions within the last four minutes with the Browns trailing — against the Titans, Rams, Seahawks and Steelers.

Those failures were tough to swallow for a guy who considers himself clutch.

“Obviously we have had a few of those drives this year that we have not capitalized on and a lot of that is on my part,” Mayfield said. “But you have to take pride in that. You have to want to have the ball last and take advantage of your opportunity.”

The Browns took over Sunday at their 20-yard line with 1:45 left and needing a touchdown. They gained 15 yards on a penalty and 5 on a pass to running back Kareem Hunt, but Mayfield was intercepted by former Browns cornerback Joe Haden on a pass intended for receiver Jarvis Landry.

“It hurts not winning that one,” Mayfield said. “Have to be better next time.”

Monken said it would be a stretch to say Mayfield’s pressed in the most stressful moments.

“Anytime you get to the end of the game and you need a score, you have to make some plays down the field,” he said. “He was just trying to make a play. We had to push the ball down the field. We needed a touchdown.”

Mayfield wishes he would’ve trusted the guys around him more.

“I would say just getting the ball in our guys’ hands,” he said. “Just letting them make plays, especially with how much time we had and just making sure to give them a chance to change the game.”