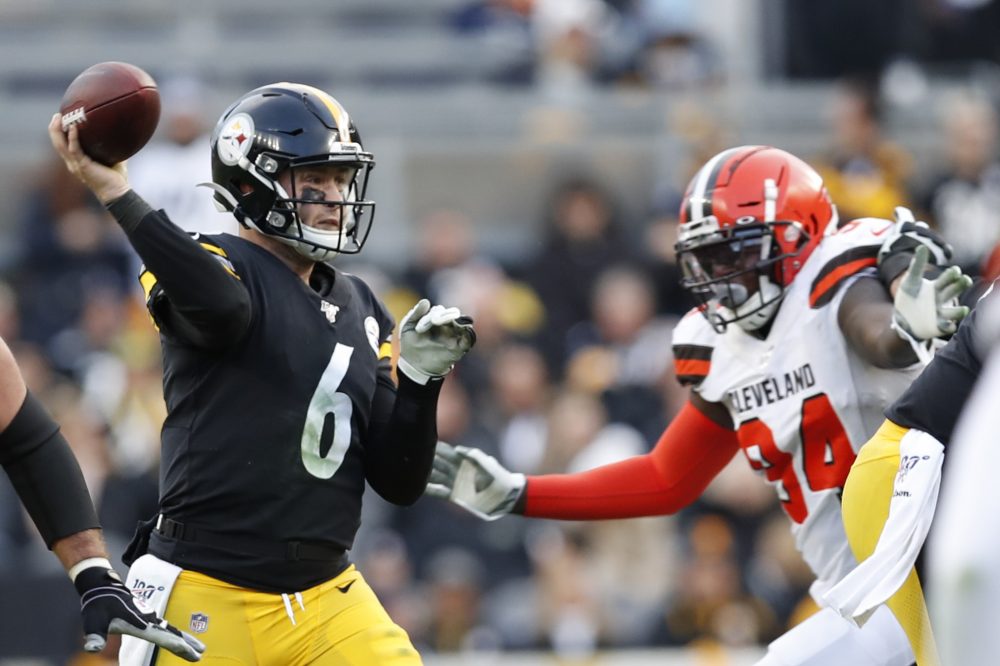 BEREA — The defensive line was supposed to be the strength of the Browns. Led by a star, supported by a couple of Pro Bowlers and loaded with depth, it was expected to carry the defense to great heights.

With a quarter of the season left, the line is hardly recognizable.

End Myles Garrett was suspended for the rest of the season, end Olivier Vernon is fighting his way back from a knee injury, end Genard Avery was traded to the Eagles, tackle Devaroe Lawrence and end Chris Smith were cut and tackle Daniel Ekuale was placed on injured reserve.

Chad Thomas has replaced Garrett in the starting lineup, joining Vernon and tackles Sheldon Richardson and Larry Ogunjobi. The five backups are new to the team since Oct. 22: ends Porter Gustin and Bryan Cox and tackles Eli Ankou, Brandin Bryant and Justin Zimmer.


“I am not going to use the word difficult. I think we have to be creative in what we are trying to do,” coordinator Steve Wilks said Thursday. “I think the guys have a lot of energy. We just have to continue to try to mix it up a little bit, and guys have to find ways to execute and finish.

“We are never going to make any excuses, but when you look at it, we have maybe four or five guys that are here on the 53 that were not a month ago. We are not canceling games. We have to find a way to get our guys in position to be successful, and that starts with me.”

Ogunjobi served a one-game suspension after the Nov. 14 brawl with the Steelers but has otherwise been a constant on the line along with Richardson. Ogunjobi said it’s up to them to make the best of a difficult situation.

“Danny Shelton did a good job of telling me that that’s just the nature of the business, it’s like a revolving door,” he said. “You kinda get used to it, but it doesn’t make it any easier, especially with the relationships that you built with the guys and the players that you do get close to.

“It’s different, but the biggest thing is you greet the new guys with open arms, get to know them, because those’ll be the guys you go to war with on Sunday. Just gotta be a good person and welcome them with open arms.”

Receiver Odell Beckham Jr. vague about future, won’t say if he wants to stay in Cleveland

“There is an old saying that if you keep them, eventually they are going to play for you, and when they play for you, they need to play well enough to win,” Kitchens said. “They are doing an excellent job. They came right in, they learned the system, they learned what we do and they have been playing at a pretty good level. They bring good focus to the practice field, and then you get them to the game and they play with great energy.”

The starting offensive line was whole again Thursday, at least for part of practice. Center JC Tretter (knee) and right tackle Chris Hubbard (knee) returned in a limited capacity after sitting out Wednesday.

“We switched them in and out and got some other guys some reps and stuff,” Kitchens said. “Took normal reps today like everyone else.”

“I am holding out hope for all of them,” Kitchens said. “Do not know for sure on any of them, but we will have a plan.”

** Wilks acknowledged Vernon didn’t look like himself Sunday against the Steelers after missing three games.

“And I commend him for trying to go out there and try to do the things that we were expecting him to do,” Wilks said. “It is a process and he is going to have to be able to fight through his pain tolerance.”

Vernon played 12 snaps against Pittsburgh, and Kitchens expects more Sunday against the Bengals.

Ogunjobi can’t stop thinking about Garrett serving his suspension. They are close friends, locker neighbors and key pieces on the line.

“Of course, it sucks that Myles is not here,” he said. “I feel it the most. That’s my brother.

Actor Tom Holland has become a Browns fan while filming the movie “Cherry” in town. Directors Joe and Anthony Russo are Cleveland natives and have taken Holland to recent games.

“I really like it there,” Holland said Wednesday on “Jimmy Kimmel Live.” “Ever since we’ve been going, they started winning.”

Holland, who’s the latest Spider-Man, was referring to the three-game winning streak that preceded the loss to the Steelers. Kimmel asked Holland if he would call himself a Browns fan.

“Absolutely,” he said. “My brother and I don’t understand the rules, so we’ve just been sitting there drinking.”

Wilks said free safety Damarious Randall has been “locked in and focused” this week after being benched last week.

“He is practicing the way we want him to and being vocal,” Wilks said. “I am excited about his leadership and the things that he brings, so we are good.”

** Wilks was defensive coordinator under Panthers coach Ron Rivera, who was fired this week.

“I would not be where I am today without him,” Wilks said.

** Special teams coordinator Mike Priefer considered replacing Tavierre Thomas as kickoff returner this week after he muffed one against the Steelers and didn’t have a return longer than 20 yards.

“I am not one to throw in the towel on a guy quickly,” he said. “I am going to keep coaching him.”

** Priefer said the Browns are tops in the league with six rookies starting on the punt team.