Odell Beckham Jr. vague about future, won’t say if he wants to stay in Cleveland 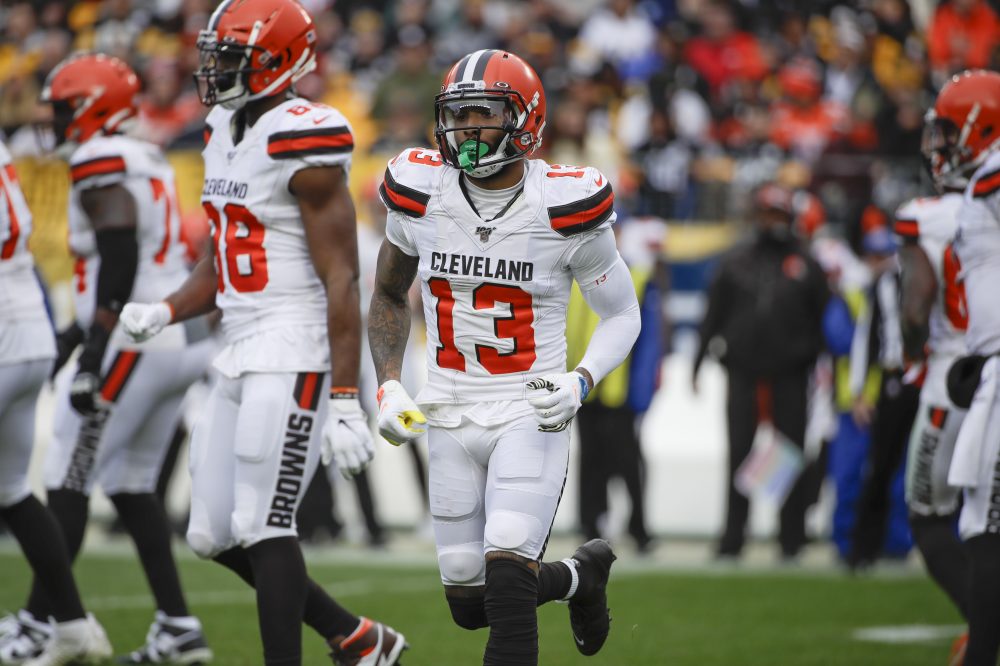 BEREA — Odell Beckham Jr. is under contract through 2023.

He feels blessed to be reunited with best friend and fellow receiver Jarvis Landry.

He just isn’t sure where he’ll be.

Or if he wants to stay in Cleveland.

“I couldn’t tell you what’s going to happen,” Beckham said Thursday. “My locker is right beside one of the men that means the most to me in the world. I think about just being able to come to work and see him every single day and how special this could be.

“I couldn’t sit here and tell you whether I’m going to be here, want to be here, don’t want to be here — this is exactly where I’m at now and I wouldn’t rather be anywhere else. God has a plan. In the offseason, everything will figure itself out.”

Beckham posted a tweet Friday morning, apparently in an attempt to clarify his comments or calm the reaction. “I NEVER said I was not happy in Cleveland, just like everyone else I’m hopeful for better results. Period. Next story plzz”

Ok😑😑😑… I NEVER said I was not happy in Cleveland, just like everyone else I’m hopeful for better results. Period. Next story plzz 😭 …

Beckham joined the Browns in March in a blockbuster trade with the New York Giants, and his first year in Cleveland has been filled with frustration. The Browns (5-7) have underachieved and are likely to miss the playoffs, and Beckham hasn’t had his usual individual success.

The three-time Pro Bowler ranks 28th in the NFL with 57 catches and 23rd with 805 receiving yards, with a 14.1 average and two touchdowns. He’s on pace for 76 receptions, 1,073 yards and three TDs, which would be career lows for a season when he’s been healthy. He had double-digit touchdowns his first three seasons in New York.

Beckham acknowledged he wouldn’t want to go through another season like this.

“I mean, honestly I couldn’t see that happening,” he said Thursday. “For me personally, this offseason, it’s about work and getting to the very best of my abilities no matter what. Like I tell you all the time, 2020’s going to be my year. So I’m not really worried about so much what’s going to happen in the future, but my mindset for next year is no matter what is going on, nothing’s going to be in my way.

“And sit here and write it down now and people could talk about it, say whatever they want, but we’ll see when it happens next year. So honestly, what’s the future hold? I don’t know that.”

Beckham signed a five-year, $90 million contract extension with the Giants in August 2018 and is scheduled to make $14 million next season. He remains one of the league’s most talented wideouts, and general manager John Dorsey gave up safety Jabrill Peppers and first- and third-round picks in the 2019 draft to acquire him.

But Beckham, 27, courts drama and did nothing to shut down speculation he could try to force his way out of town in the offseason, despite being given two chances.

“That’s something that we’ll worry about when offseason comes around,” he said. “Right now I’m just still learning, I’m learning every single day. New experiences and just trying to find a way to finish the rest of the season strong. If it’s possible that we can make the playoffs, I’m all in.

“I’ve been pretty much banged up all year since whatever happened in camp. I’ve been playing through it, doing whatever I can just to make it to Sunday for the game. So anytime that Sunday comes around, 1 o’clock, 4 o’clock, 8, Monday night, Thursday, I’m going to give this team everything that I have. No matter what.”

Coach Freddie Kitchens has supported Beckham throughout the season and said he hasn’t acted disgruntled.

“Odell has not been a problem at all,” Kitchens said. “He has been good. Helps everybody, helps the young guys. Baker (Mayfield) and Odell have a good dialogue. Everything is good.”

Beckham hasn’t missed a game and has played 96.4 percent of the offensive snaps despite battling a groin injury — he compared it to running back Kareem Hunt’s sports hernia that was fixed though surgery — that’s limited him in practice recently. But Kitchens, coordinator Todd Monken and Mayfield haven’t figured out how to get him the ball consistently.

He went eight games without a touchdown before catching one Nov. 24 against Miami, and has gone a career-long six straight without a 100-yard performance.

“It’s tough. Along with every other position, you want to help, period,” Beckham said. “Ultimately what fixes everything is winning, and when you don’t win that’s when you can see problems.”

In an interview filled with vagueness, he was definitive on one topic. He’s matured in dealing with personal frustration.

“It’s through growth,” he said. “I’ve come too far and experienced too much for whatever I have going on inside for that to come off, so I just keep it all in.

“There’s definitely been a concerted effort by me just to keep myself in check, know that everyone is watching. They want to see me mad or throw a helmet or punch a cooler or hug a kicking net and hit the kicking net. They want to see those things and it’s just on me and I’ve made that effort, that decision, that choice to not allow that no matter what’s going on.”

Beckham’s outbursts with the Giants drew a ton of attention, and he said they were all about not winning. He let a little frustration escape Sunday when he barked at the Browns sideline after making a 19-yard catch in the fourth quarter.

“It’s just something I worked on controlling and there’s always going to be that fire that’s inside me,” he said. “I try so much to dim it and I can’t always dim it, so I’m trying my very hardest to be mature and I feel like I’ve done a great job. Aside from not having a good season, I feel like I’ve done the best I can at controlling my emotions and everything else.”

“He wants to be the solution to helping us win, and he really just wants to win when it comes to it,” Mayfield said. “Anytime you are losing, it is frustrating and it is not fun, so he wants to help out in any way he can so we have to try and find ways to get him the ball. There have been a few things that are off here and there or else we would have some bigger plays and a lot more connections.”

Beckham described the season as a bunch of games of could’ve, should’ve, would’ve.

“For me personally, I’ve taken a lot of L’s this year, a lot of lessons and growth and growing pains that will be able to be taken and carried on,” he said. “For everybody there’s been a lot of disappointment. Not like we didn’t know we were going to have to go out and work for it, but we just expected it, and we were willing to go get it. We just didn’t get it.”

OC Todd Monken believes in Baker Mayfield despite struggles, calls him “right guy going forward” for Browns
Odell Beckham Jr. declines to comment on report he’s told opponents this season “Come get me out of here”