Cornerbacks go on attack, try to rebound from long day in Pittsburgh 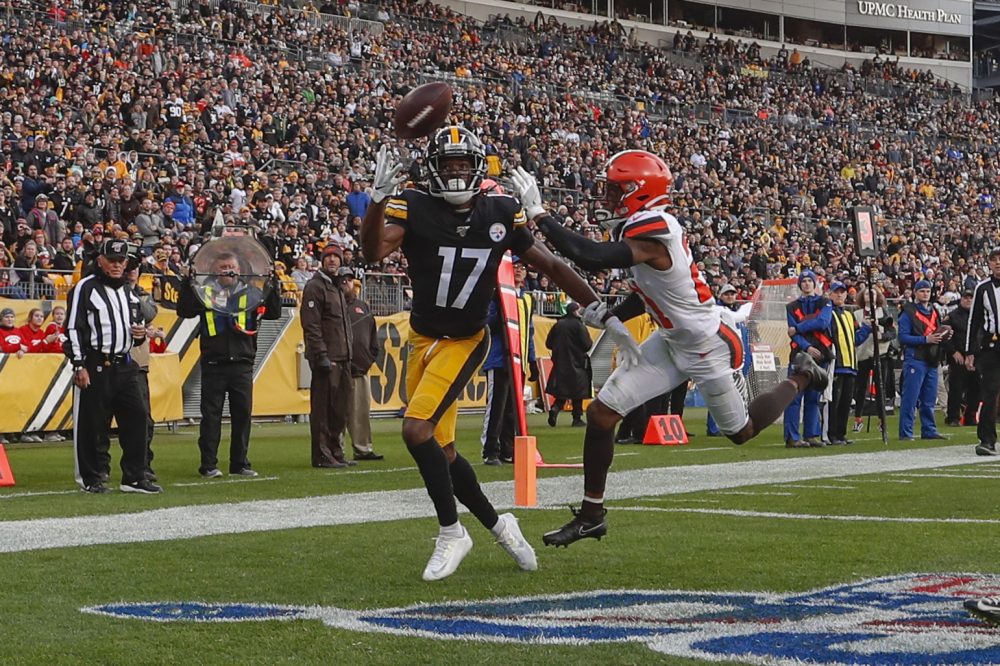 BEREA — So much of a cornerback’s job is reacting.

Of the many factors that played a role in the 20-13 loss to the Steelers on Sunday, perhaps the most significant was the inability of the corners to stop the deep ball.

Undrafted rookie quarterback Devlin Hodges completed 44-, 31- and 30-yard passes to receiver James Washington, sparking a 20-point run that erased a 10-0 deficit and accounted for 33 percent of the Steelers’ 323 total yards.

“It was very disappointing, man,” Carrie said. “We have a high standard just from the DB perspective of controlling that. You just take away those three big plays, the game is different, right?”

Williams, Carrie and Ward were responsible for a completion each, and the coaches saw a common denominator. The corners didn’t go after the ball on the 50-50 plays.

“Greedy and Denzel had great coverage,” coordinator Steve Wilks said. “We just have to find ways to turn around and make plays on the ball.”

The first job of a corner is to keep up with the wideout. Carrie was beat by a half-step on the touchdown, but Williams and Ward were right there.

“We were in position, we’ve just got to make plays on the ball,” Williams said. “Attack the ball. Attack the ball with a lot of urgency. Just making plays.”

The philosophy and technique were points of emphasis during practice this week and will likely be tested Sunday by the Bengals. At 1-11, they have nothing to lose, veteran quarterback Andy Dalton has regained his starting job and isn’t afraid to let it rip and speedy receiver John Ross returns to join Tyler Boyd for a dangerous duo.

“Yeah, I mean, it’s on film,” Williams said. “We’ve been tested and we haven’t made plays yet so, of course, I expect them to come in and throw a couple deep balls.”

The notion of attacking the ball starts with finding it in the air. The task seems simple enough, but the cornerback must make a decision when to turn his head and lose sight of the receiver.

“In the game it’s just split-second decisions and if you feel like you’re in position, then you can turn and get your head around,” Ward said. “Sometimes you look, sometimes you may not look. Yeah, you want to try to get your eyes back on the ball and make a play on it.”

Ward pointed out that he turned and made a play in the first matchup against the Steelers, deflecting a pass to safety Morgan Burnett for an interception. Wilks said the skill is usually instinctive but stressed it’s his job to improve the players through coaching.

“I think it is just repetition, and naturally some guys have it,” he said. “When you scout guys coming out of college, that is something you look for — guys who can really have that natural feel of the flash of the ball when they can just see it and play it.”

The lack of attack is evident in the interception stats. Carrie has one, Ward and Williams none.

“A little bit,” he said. “I got some hands on some balls but I’m just here to do whatever I can to help this team win and if I get the opportunity to get an interception, hopefully I can go out there and make it and help this team out.”

Coach Freddie Kitchens had one more coaching point. If the corners are unable to make a play on the ball in the air, they must try to knock it loose from the wideout.

“It’s never over until it’s over and the whistle blows,” he said. “At whatever point the receiver has the ball, if he does not finish the catch, it is incomplete. I think we need to continue to try to get better in that area.”

The absence of defensive end Myles Garrett has made life more difficult for Ward, Williams and Carrie. The pass rush hasn’t been the same without the team’s sack leader — Hodges was sacked once and hit four times — giving quarterbacks more time to wait for receivers to come free. Wilks has also called more blitzes to create a pass rush, leaving the corners without as much help in coverage.

“Myles is a great player,” Ward said. “He gets to the quarterback pretty fast, so timing may slow down a little bit and quarterbacks may have a little more time to kind of go through their reads and get the ball off not having Myles in there, but we’ve still got to go in there and make plays and do our job.”

That includes having a short memory and rebounding from the rough day in Pittsburgh.

“I’ve got a lot of confidence in myself and those guys that we’re going to bounce back,” Ward said. “It’s the National Football League. We’ve just got to go out there and compete and do it the next game.”