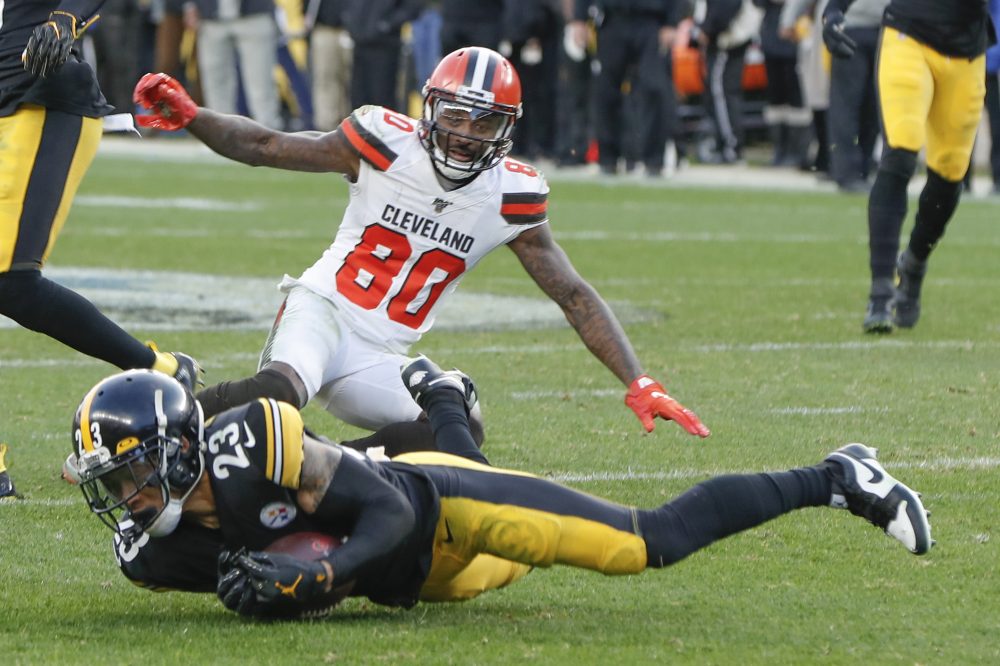 In a season filled with disappointing losses of all shapes and sizes, the 20-13 heartbreaker last week in Pittsburgh re-established rock bottom.

The devastation came on so many levels.

The Browns couldn’t hold a 10-0 lead or complete a season sweep of the short-handed Steelers. The failure was comprehensive, as the offense, defense and special teams had major breakdowns.

Worst of all, the playoff chances were all but erased.

But the season keeps chugging along, the Bengals visit FirstEnergy Stadium on Sunday and the Browns’ mental toughness will be tested.

“You can’t trip on what’s already behind you,” defensive tackle Larry Ogunjobi said. “You’ve got to move forward.”

“I want to see how we respond as a team,” left guard Joel Bitonio said. “It wasn’t our best performance. We wanted to go out and get a win last week (against) a team we thought we could beat, and they took it to us in the second half. It was disappointing, for sure, but I think we do have the right guys in this room to respond.

“We’re just focused on beating Cincinnati this week and doing everything we can to get that victory, but it’s a challenge. You come back, you think you’re rolling, you have a chance, and it kind of knocks you down a peg, but that’s the NFL. It’s a week-to-week business, and how good we can be this week.”

The season feels like one long, tough test of character. The Browns (5-7) have brought the challenges upon themselves.

They began the season 2-6, can’t figure out how to get the ball to receiver Odell Beckham Jr., lost defensive end Myles Garrett to suspension for the final six games and were defeated by inexperienced and unheralded quarterbacks Brandon Allen (Broncos) and Devlin Hodges (Steelers).

The No. 1 question this week is whether the Browns will have the resilience to rebound. The loss at Pittsburgh was the kind that can break a team’s will.

“I don’t question that. I think the guys want to keep fighting,” said center JC Tretter, who expected to play against the Bengals despite a knee injury. “It’s pride first off. I don’t think anybody’s heading for the exits.

“I was here for the 0-16, there weren’t really guys quitting at that time. I don’t think a team of our caliber and where we stand right now — we still have chances at postseason opportunities — I don’t think guys would be thinking about that.”

Ogunjobi also referenced battling through the 0-16 season of 2017.

The players rallied around the remote playoff chances during the three-game winning streak that preceded the loss to the Steelers and are clinging to the long shot that remains. The Browns trail the Steelers (7-5) and Titans (7-5) by two games in the chase for the second AFC wild card spot, and are a game behind the Colts (6-6) and Raiders (6-6).

The Browns need to win their last four games — vs. Cincinnati (1-11), at Arizona (3-8-1), vs. Baltimore (10-2) and at Cincinnati — and get help. ESPN analytics put Cleveland’s chances of reaching the playoffs at 5 percent, but that’s enough to keep the players engaged.

“We have to realize that no matter what other things are going on on the outside, we have to have that singular focus,” quarterback Baker Mayfield said. “If we do want to make the playoffs, we have to buckle down and win each game from here on out. It is just plain and simple. We can’t have any slipups and we have to win.”

The Browns have won three straight at home after dropping their first three on the lakefront. They haven’t won four in a row at home since 2007.

They shouldn’t take the Bengals for granted. Cincinnati lost its first 11 games under rookie coach Zac Taylor, but veteran quarterback Andy Dalton was reinserted in the lineup last week and led a 22-6 win over the Jets. The Bengals don’t have to worry about going winless anymore, which could free them to play their best.

“It is good to see, but we had to put it to bed pretty quickly because, as we know, it is a big divisional game against Cleveland,” Taylor said. “We have to get our first divisional win for the year.”

“Those boys have been fighting hard,” said Browns defensive end Olivier Vernon, who’s fighting through a knee injury. “So these are the games you can’t underestimate anybody. They’re going to try to keep on a high note, and we’ve just got to do what we’ve got to do.”

A little consistency would go a long way, as coordinator Todd Monken lamented the “choppy” play that’s prevented the offense from approaching its vast potential.

“If you look at our team and the players we have, if we could be a consistent team on a play-to-play basis, practice to practice — it’s not even game to game — that’s how you become better as a team,” Bitonio said. “We beat Baltimore and Buffalo. Those two teams are rolling right now. Then you lose to Denver and Pittsburgh last week — it’s like there are two different teams playing.

“On each play, we’re having a major breakdown on one of the 11 positions on the field and you can’t win. I think the most important thing is, ‘Can we play our best game and win a football game?’”

Coach Freddie Kitchens needs a win as much as anyone. He said he’s not worried about his job security, but a loss to a one-win team would certainly give fuel to the critics and create more doubts about his future.

He liked his team’s focus, enthusiasm and energy during the week.

“I think we are ready to play,” Kitchens said. “I think our character will be demonstrated on Sunday on how we go out and play.”

Njoku suffered a broken right wrist in Week 2 against the Jets. He returned to practice Nov. 20.

Cornerbacks go on attack, try to rebound from long day in Pittsburgh
Baker Mayfield gives up grudge, “in a good place” with Cardinals coach Kliff Kingsbury after contentious parting at Texas Tech