Commentary: Browns brilliant at drama, only OK at football 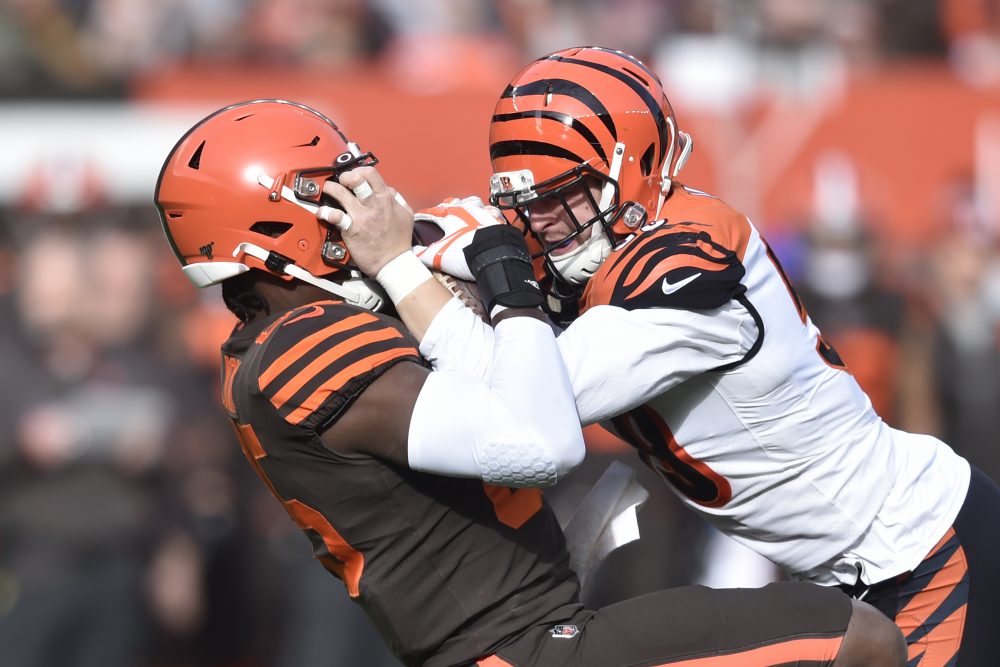 In another messy game that apparently counted, the Browns on Sunday beat a 1-11 team, although they probably would have lost had they been playing a 2-10 team.

If you’ve been paying attention to this whirligig of a season, a Browns game, and gameday, tends to be more spectacle than game. That was the case Sunday, where for much of the afternoon the game looked exactly like what you’d expect in a game between a 1-11 team and a team having trouble beating a 1-11 team.

The pressure was on the Browns, who at 6-7, are still desperately clinging to playoff hopes that were seemingly blasted out of the water the previous week in “The Steelers started it” loss.

Sunday’s game figured to be the easiest remaining game on the Browns’ schedule, except for their last game of the season, against those very same hapless Bengals, who by that time should have a record of 1-14.

As usual, the drama surrounding the kings of drama began with two pregame Beckham-mania reports: by Fox Sports’ Jay Glazer that Odell Beckham is telling opposing coaches and players he wants out of Cleveland, and by the NFL Network that Beckham is playing with a sports hernia that will require surgery.

The latter triggered a postgame comment from Baker Mayfield, who said Beckham’s injury “was not handled the right way in our training room.”

Beckham said he’s had the injury since training camp, “But it is what it is. I just have to keep playing.”

Drama on top of drama, overshadowing a victory. Just another day at the office for the Browns.

In his postgame session with reporters Kitchens wouldn’t touch the “I want out” Beckham report, probably because the head coach was too busy defending his decision to abandon the Browns’ running game in the first half of Sunday’s non-loss.

The Bengals have the worst run defense in the NFL, but the Browns apparently thought they’d cross up the visitors by not attacking their weakness.

“I thought we had some plays there in the pass game,” said Kitchens.

The coach finally addressed his lopsided play-calling in the first half by calling for running plays on the Browns’ first four plays and five of the first six plays in the second half, a burst of genius that resulted in a 57-yard Chubb chug, and a 3-yard Hunt TD run.

That Kitchens waited so long to let his horses out of the barn was even more puzzling in that Mayfield had another forgettable game, throwing two interceptions and no touchdowns.

The Bengals’ breathtaking ineptitude is reflected in the fact that the Browns won a game in which Mayfield had a quarterback rating of 38.9, which was over 40 points lower than his league-worst 79.9 rating coming into the game.

In typical Browns fashion the game was filled with the inexplicable, which made their victory more inexplicable still. To wit: With 31 seconds left in the first half, Cincinnati was forced to punt from its own 24-yard line. But the Browns, leading 14-13, refused to call timeout. The half ended, and the Browns, with all three of their timeouts, jogged into the locker room.

The final stats look like the winners lost and the losers won: the Bengals outgained the Browns 451-333 in total yards, 179-146 in rushing yards and 27-17 in first downs.

The Browns, however, lead the league in drama, whether they win the game or not.

Every week, it seems, it’s something new. That piles even more on Kitchens’ overloaded plate, and on the diminishing chances — despite going 4-1 in their last five games — of the Browns ending their 17-year playoff drought.

“You never know what can happen. So we have to come out here and win out pretty much,” said Hunt.

“We’re still fighting,” said Jarvis Landry, “We’re in it until they tell us we’re out.”

It might make it a little easier on everyone, especially the embattled coach, if the wins kept coming, but without the histrionics.

“All we can do,” said Odell Drama Jr., “is win the rest of our games and let fate be fate.”

Prediction: Browns 41, Bengals 31
Browns 27, Bengals 19: The breakdown — thumbs up, thumbs down, the matchups