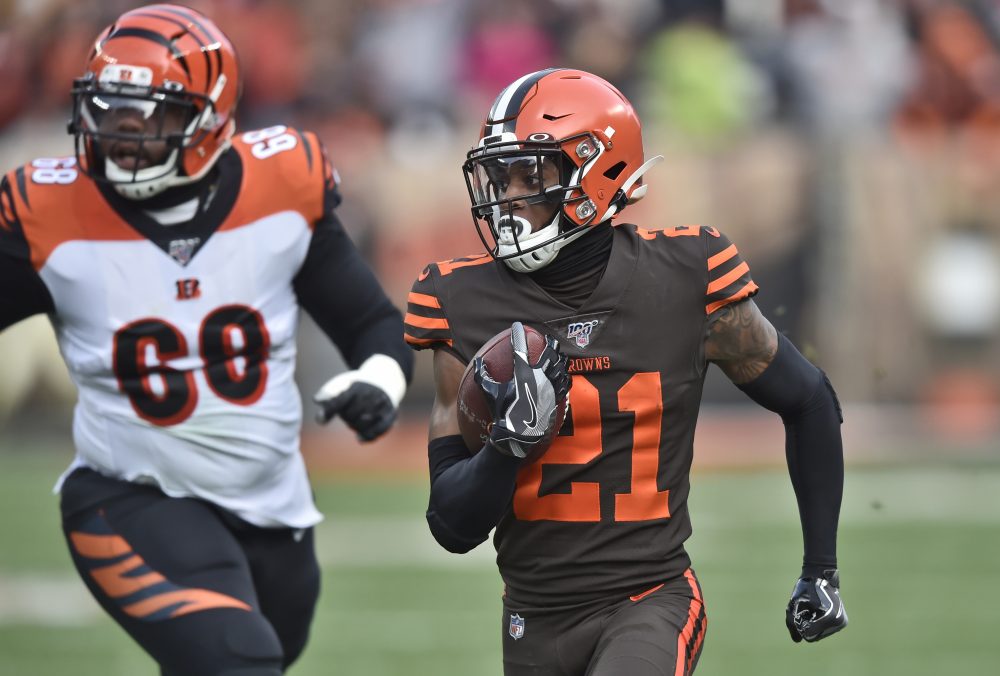 Denzel Ward responded and then some Sunday.

The second-year cornerback gave Cleveland some momentum when he picked off the Bengals’ Andy Dalton and returned it 61 yards for a touchdown in the Browns’ 27-19 win at FirstEnergy Stadium.

“I think it was huge because we were up 7-6 and also the defense did a good job of stopping them down there and making them kick a field goal one other time,” he said. “I think they had a first-and-goal inside the 10, and they stopped them and made them kick a field goal. That whole sequence of events in the first half was very crucial. They kind of shut the door when they had to. Then we were able to start moving the ball a little bit and scored. Then in the second half, up front we kind of played real well in the second half.”

It was Ward’s first interception of the season after getting three last year as a rookie. The last time the Browns defense scored a touchdown was Oct. 15, 2017, when Jason McCourty intercepted a Deshaun Watson pass for a 56-yard touchdown in a 33-17 loss to the Texans.

“I try to do whatever I can to help this team win, and my guys, like I said, did a good job of getting me into the end zone and helping me finish the play,” Ward said. “A pick-six at any point in the game is a great time, so, like I said, those guys did good helping me get in the end zone. Just glad I was able to help my team get the win.”

Ward’s interception came at a pivotal point Sunday. Cincinnati’s offense was moving into the red zone seemingly at will — driving down to the Browns’ 6-yard line before settling for a 34-yard field goal on its opening drive.

The Browns looked as if they were going to answer, but Baker Mayfield’s pass to David Njoku was stripped by Nick Vigil and eventually ruled an interception. The completion would have put the Browns inside the Bengals’ 20-yard line.

Cincinnati then drove inside the Cleveland 40 before Joe Mixon’s unnecessary roughness penalty put the Bengals in a third-and-25. Dalton lofted a pass up for Auden Tate and Ward came away with the pick.

He had no doubt he was scoring.

“Right away,” Ward said. “As soon as I got the tip, I saw nothing but green grass and my guys going out front and blocking for me and just trying to set the blocks up to get in the end zone.”

Despite allowing 451 total yards — including 179 rushing — and 27 first downs, the Browns limited the Bengals to one touchdown in five trips inside the red zone, settling for field goals the other four times.

Cincinnati also converted only three of its 12 third-down attempts and was 1-of-2 on fourth down.

“We just tried to go out there and make plays and play complementary football and do what we can to get our offense in great position to win the game,” Ward said.