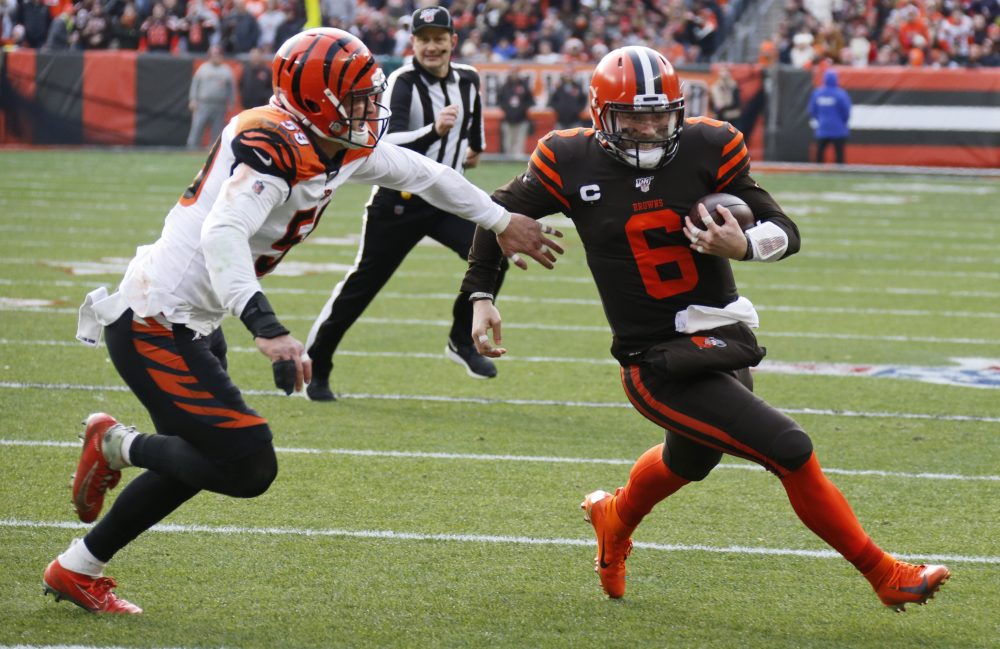 CLEVELAND — Quarterback Baker Mayfield showed how quickly he can backpedal.

Mayfield criticized how the team’s medical staff handled receiver Odell Beckham Jr.’s sports hernia in his news conference after the Browns’ 27-19 win over the Bengals. He said Beckham should’ve had surgery right away in training camp and would’ve missed only a game or two to start the season.

“Wasn’t handled the right way in our training room,” Mayfield said. “So it is what it is. His not 100 percent is still good enough for us.

“I think it could’ve been addressed earlier on.”

Mayfield backtracked in a tweet about an hour later.

“My intentions were not to throw our medical staff under the bus,” he tweeted. “No I don’t know all the facts about Odell’s injury. It was emotionally answered because I can sense his frustration and I care about my team and putting us in the best position to win.

“Those people within our building know my intentions and where I am coming from. I truly believe that and I apologize to those that don’t deserve the backlash…. today was a good team win. On to the next one.”

Those people within our building know my intentions and where I am coming from. I truly believe that and I apologize to those that don’t deserve the backlash…. today was a good team win. On to the next one.

The Browns first listed Beckham’s injury as a hip and more recently as a groin on the official injury report. Beckham on Thursday compared it to running back Kareem Hunt’s injury, a sports hernia fixed through surgery in August. Beckham said Sunday he didn’t know for sure if the injury classifies as a sports hernia and said to ask the doctors.

ROLLING ON THE LAKE

If the Browns keep on winning at home, the run could be known as “The Kareem Effect.”

The Browns are 4-0 on the lakefront since Hunt returned from an eight-game suspension. It’s the longest home win streak since seven in a row in 2007.

“It’s nice playing at home, and it is even better playing for your hometown team,” said Hunt, who was born in Elyria and went to Willoughby South High School. “Plan on hopefully going undefeated here in Cleveland, and that will be something big.”

Cleveland started 0-3 at FirstEnergy Stadium, losing to the Titans, Rams and Seahawks. The wins came against Buffalo, Pittsburgh, Miami and Cincinnati.

“It is crucial. That gets you back into things,” coach Freddie Kitchens said.

Since Mayfield was drafted, Cleveland is 9-5-1 at home. The Browns had won just three home games in the previous three seasons.

The home finale is Dec. 22 against the Ravens (11-2). A win would give the Browns a winning home record in back-to-back seasons for the first time since returning to the NFL in 1999.

“It’s great right now,” Mayfield said. “I wish we could go back and fix the early stuff. It still gives us a chance, and that is the most important thing.”

Tight end David Njoku returned to action for the first time since breaking his right wrist Week 2 but didn’t have the impact he had hoped. He caught one pass for 4 yards and bobbled another that turned into an interception.

On Cleveland’s first possession, already trailing 3-0, Mayfield threw to Njoku over the middle at the Cincinnati 15-yard line. Njoku didn’t secure the ball cleanly, and linebacker Nick Vigil took it away as they hit the ground and returned it 34 yards. The official ruling of a fumble was changed to an interception and withstood the replay review.

“Hold onto the ball. That is it,” Kitchens said of his message to Njoku. “We were not catching the ball, and when you hit the ground, your arms cannot relax. The ball has to be the upmost of importance for everybody on the field.”

Mayfield and Njoku didn’t agree with the call.

“David’s play was a catch, by the way,” Mayfield said.

“I don’t know how it can be an interception or a fumble if I already hit the ground, but that’s football,” Njoku said.

The defense held the Bengals to 1-for-5 in the red zone, including forcing a field goal after they had first-and-goal from the 2 in the third quarter and getting a fourth-down stop from the 4 in the fourth quarter.

The Browns led 21-13 when the Bengals reached the 2 with 5:34 left in the third quarter. On first down, defensive tackle Larry Ogunjobi and end Bryan Cox teamed for an 8-yard sack of Andy Dalton.

“I just wanted to make a play for the team and it worked,” Ogunjobi said. “Just got penetration, got good knock-back, ends collapsed the pocket and I just drove them back.”

Ogunjobi set a career high with nine tackles and is second on the team with 5.5 sacks.

On the fourth-quarter possession, Dalton threw incomplete on third-and-goal from the 4 under pressure from blitzing linebacker Mack Wilson. He was stopped at the 2 on a quarterback draw on fourth down.

Rookie punter Jamie Gillan knew where to find his father, Colin, at the end of the national anthem.

Colin was the squadron leader for the pregame flyover.

“This will be a first for me by a long shot,” Colin told the team’s website during the week. “I watched a couple of previous ones. It was incredible, actually. You see the crowd as it goes across the stadium, it’s incredible.”

Colin’s a longtime member of the Royal Air Force and moved the family from Scotland to Maryland when Gillan was in high school.

Kendall Lamm made his first start with the Browns in place of right tackle Chris Hubbard, who suffered a knee injury last week. Lamm was matched up against defensive end Carlos Dunlap, who had no sacks, five tackles, a quarterback hit and two passes defensed.

Defensive end Olivier Vernon (knee) was inactive after being listed as questionable.

He returned last week after missing three games with a knee injury but was limited to 10 snaps and didn’t look like himself. He was limited Wednesday and Thursday in practice then didn’t practice Friday.

Rookie Austin Seibert made a career-long 53-yard field goal and added a 31-yarder.

** Damion Ratley was the primary No. 3 receiver, sharing time with KhaDarel Hodge. Rashard Higgins was active but glued to the bench.

** Defensive tackle Sheldon Richardson started the game at end and played both spots. He had a season-high seven tackles and a sack. His three sacks this year have come in the past three games.

** Former boxer Ray “Boom Boom” Mancini hyped up the crowd on the scoreboard during the first quarter.

Chris Sweeney contributed to this report.