Odell Beckham Jr. declines to comment on report he’s told opponents this season “Come get me out of here” 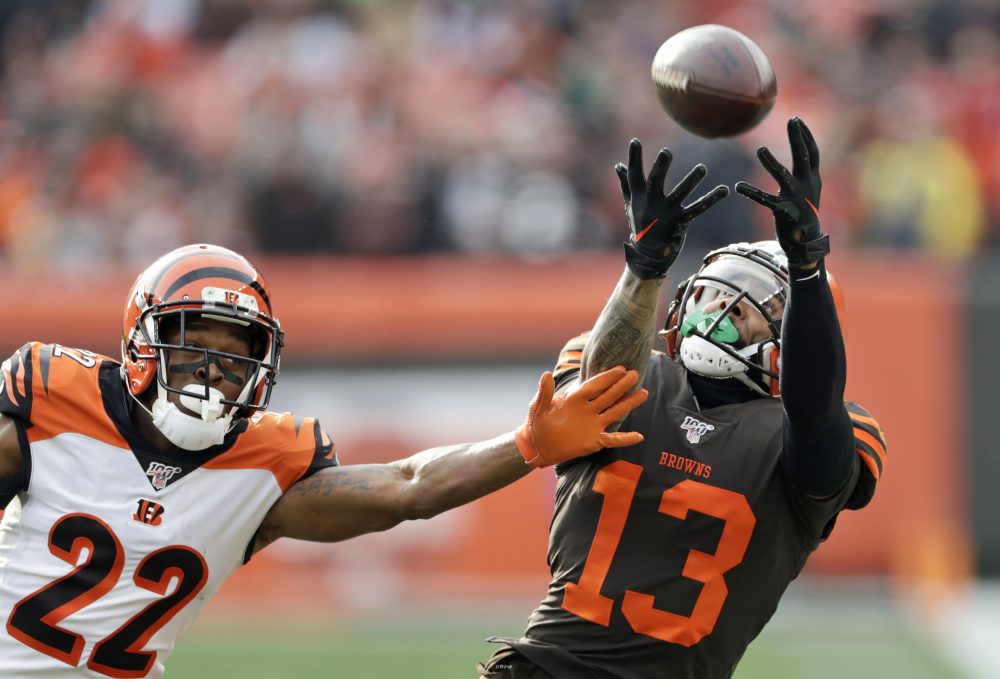 CLEVELAND — Odell Beckham Jr. keeps getting chances to say he wants to come back to Cleveland next year.

He continues to pass.

Fox Sports’ Jay Glazer reported during the pregame show Sunday that Beckham has wanted out for a while.

“Throughout this year, Odell Beckham has actually told other players and coaches before games, ‘Hey, come get me. Come get me out of here,’” Glazer said. “Remember, it was not Odell’s choice to go to the Cleveland Browns. He got traded there. … I’ve got to say, I don’t see that relationship ending well for them after this year.”

Beckham declined to discuss the report following the 27-19 victory over the Bengals at FirstEnergy Stadium.

“I’m not going to talk about any offseason stuff that’s going on,” he said after catching two passes for 39 yards. “Right now the focus is to win, 1-0, and that’s what we did today. Any other questions about it I’m not going to answer.”

On Thursday he was given multiple opportunities by reporters to shut down the anticipated offseason speculation that he would want to leave.

“I couldn’t sit here and tell you whether I’m going to be here, want to be here, don’t want to be here — this is exactly where I’m at now and I wouldn’t rather be anywhere else,” he said Thursday. “God has a plan. In the offseason, everything will figure itself out.”

“The drama is just drama. It continues to be that on the outside. Within our walls we know exactly what we have, and we have a good relationship. It’s very straight to the point, so I’m not worried about that.”

Beckham is under contract through 2023, so it will be the Browns’ decision how to handle the situation. General manager John Dorsey traded safety Jabrill Peppers and first- and third-round draft picks to the Giants in March for Beckham.

“I NEVER said I was not happy in Cleveland, just like everyone else I’m hopeful for better results. Period. Next story plzz” he tweeted.

Beckham acknowledges the frustration he’s felt throughout the season. A primary source is a sports hernia that’s bothered him since training camp, limited his ability to practice and slowed him during games.

He plans to play the final three games and then decide whether to have surgery.

He’s played all 13 games, catching 59 passes for 844 yards and two touchdowns. They’re solid numbers but well below what he did during his three healthy Pro Bowl seasons with the Giants. He’s gone seven games without a 100-yard performance, the longest drought of his career.

“I really don’t run until Friday, then I come out here and do what I can,” he said. “There’s nothing to really do, just finish out the season, try and be 1-0, try to get to these playoffs. Still all the same goals regardless of what’s going on.”

Coach Freddie Kitchens wouldn’t comment on the Glazer report but addressed the injury.

“He has done a good job of trying to prepare, trying to push through and all that kind of stuff,” he said.

Beckham still looks fast and acrobatic — he made a brilliant back-of-the-ball catch down the sideline Sunday but was unable to stay inbounds — but the production hasn’t followed. This was his third game of the season with only two receptions, something that happened only once in his six-year career — his second game as a rookie with the Giants in 2014.

With the disappointing season for the team and the swirling speculation, Mayfield was asked about keeping the group together for the future.

“If we finish the way we need to and carry that momentum, kind of how we finished up last year and having the same guys and keeping stuff similar within the building, it can be important for us,” he said.