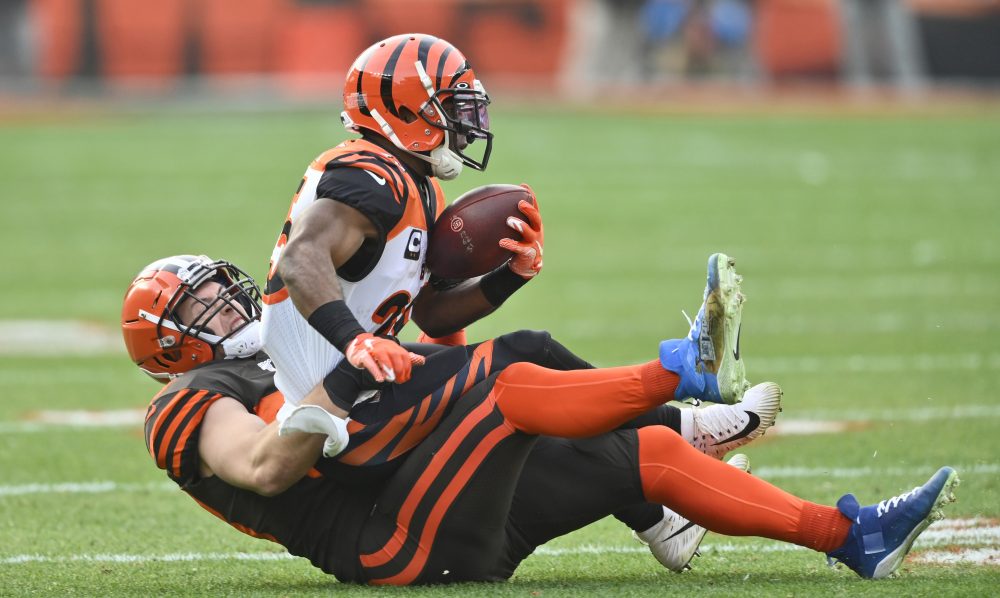 BEREA — Middle linebacker Joe Schobert is ninth in the league with 110 tackles, tied for third with four interceptions and making a strong push for his second Pro Bowl trip in three years.

He said the Browns haven’t offered him a contract extension.

“I let my agent handle all this kind of stuff, but my understanding is we haven’t gotten any offers,” Schobert said Monday. “So can’t really build on it from there.”

Schobert, a fourth-round pick out of Wisconsin in 2016, is in the final year of his rookie deal and scheduled to become a free agent in March. He’s said all along he’d like to stay.

“My No. 1 priority is to play the season out and do the best of my abilities and control what I can control,” he said. “At the moment I let my agent handle all of that stuff. I can’t really control what’s going on, what’s being said upstairs to my agent.

The market may have been set Saturday when the Panthers signed Shaq Thompson, a first-round pick in 2015, to a four-year, $54.2 million extension with $28 million guaranteed. His $13 million average salary ranks sixth among NFL inside linebackers, according to spotrac.com.

“My agent texted me after that contract came out but obviously playing as a linebacker in the NFL you like to see stuff like that, especially when you’re in that similar situation,” Schobert said. “But it’s a different scenario, different teams.

“I’m sure after the season we’ll sit down and have some more detailed conversations about things that are going on in that scenario.”

He believes he’s played at a consistently high level throughout the season and would like a return trip to the Pro Bowl.

“Going to the Pro Bowl was great. It was a paid vacation,” Schobert said. “Had a lot of fun down there with the family, always want to go back any opportunity I can, so obviously voting is going on. It’s a social vote, fans vote.

“I’ve tried to push for me and other guys on defense for the Browns to get there because it was a great experience. I’d want anybody who deserves it to be there to be able to experience it. I guess you’ve got to see what happens. Can’t get too caught up in it, though.”

Kendall Lamm may have earned a longer look after making his first start with the Browns on Sunday at right tackle against the Bengals. He replaced Chris Hubbard, who was inactive with a knee injury, and held defensive end Carlos Dunlap without a sack.

Could Lamm keep the job even if Hubbard is healthy enough to play Sunday against the Cardinals?

Lamm started 13 games at right tackle for the Texans last year and signed with the Browns as a free agent.

“Kendall did great,” center JC Tretter said. “He’s got plenty of experience, he started a lot of games down in Houston, so that wasn’t something that we were even concerned with going into the game. We had all the faith in the world in him, and he went out there and battled and played really well.”

Quarterback Baker Mayfield was sacked once, and Kitchens called it the line’s best game of the season, complimenting all five starters.

TWO IS BETTER THAN ONE

Running back Kareem Hunt has settled into his role as third-down back and complement to Nick Chubb. Hunt carried nine times for 28 yards, including a 3-yard touchdown, and caught two passes for 40 yards against the Bengals. In five games since returning from suspension, he’s touched the ball between 10 and 12 times a game.

“Kareem, as we move forward, his role will continue to increase,” Kitchens said. “I just know I like the two guys we have when the quarterback turns around and looks back there.”

“When you can run the ball to either side, there really is no strength to the formations from a run game standpoint, and then you can release both guys out of the backfield and both of them have good hands and are able to make plays with the ball after the ball is in their hands,” he said. “I would mention what goes unnoticed is the both of them are excellent pass protectors, so now if you need to throw the ball down the field a little bit, you can do it because they can hold up in pass protection.”

NONE OF YOUR BUSINESS

Tretter had a strong reaction when informed Bengals defensive end Carl Lawson told the Canton Repository after the game the Browns were “not connected” as a team on the field.

“A lot of people can say a lot of things,” Tretter said. “I try not to waste too much of my time worrying about what kind of a random guy’s opinion is on stuff that he doesn’t know what’s going on with this team. I think he should probably worry about what’s going on on his own team at this point.”

Tretter hurt his knee Dec. 1 against the Steelers but managed to finish the game. He didn’t practice Wednesday and was limited Thursday and Friday but was able to play all 56 offensive snaps vs. the Bengals.

He played the final 10 games last season with a high ankle sprain and hasn’t missed a snap in three years with the Browns.

Defensive end Olivier Vernon (knee) was inactive Sunday after returning the week before against the Steelers for 10 snaps. He had missed the previous three games.

“Olivier really wanted to get back for Pittsburgh,” Kitchens said. “He wanted to go again. We felt like it was best just to give him a little more time.”

Kitchens said it was too early to tell if he’ll be able to play vs. Arizona.