Baker Mayfield gives up grudge, “in a good place” with Cardinals coach Kliff Kingsbury after contentious parting at Texas Tech 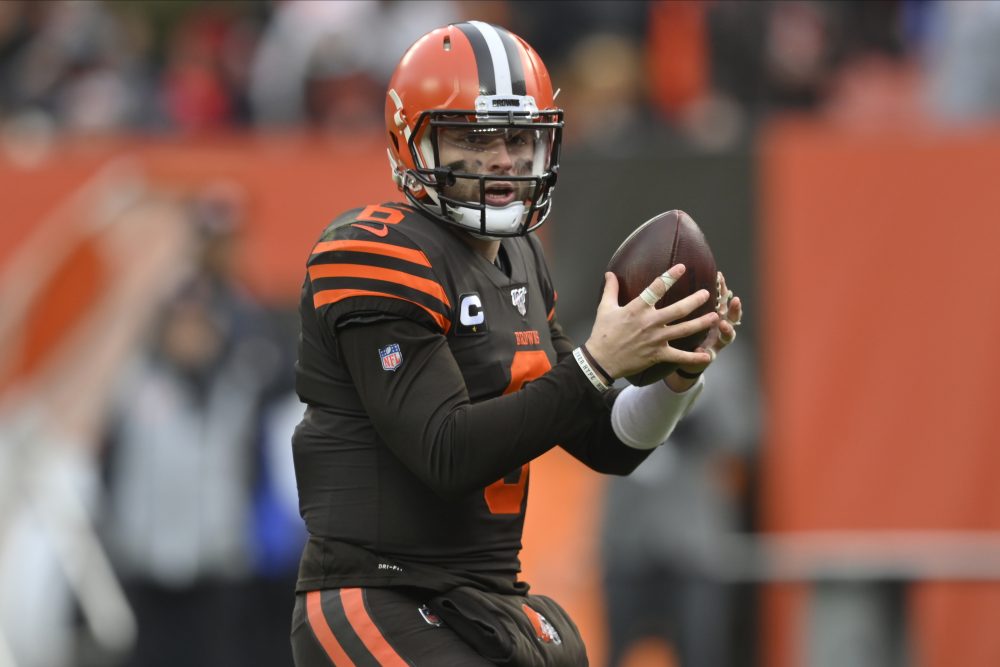 BEREA — Baker Mayfield won the Heisman Trophy and became the No. 1 pick in the NFL Draft by squeezing every ounce of motivation from any slight — genuine or perceived. The approach made him the ultimate walk-on success story.

With the Browns (6-7) headed to Arizona this weekend to face the Cardinals (3-9-1) in another must-win, Mayfield insisted he’s no longer hanging on to the grudge against rookie coach Kliff Kingsbury that fueled him during his years at the University of Oklahoma.

“I mean, it’s a long time ago,” Mayfield said Wednesday. “We’ve talked since, played against him a few times since and so it’s exactly that, we’re in a good place.”

Mayfield walked on at Texas Tech in 2013 when Kingsbury was in his first year as coach. Mayfield played eight games as a freshman, winning the first five and throwing 12 touchdowns and nine interceptions. He missed part of the season with an injury, said communication with Kingsbury stopped and he wasn’t offered a scholarship for the spring semester. He quickly transferred to Oklahoma.


Mayfield said Wednesday he wasn’t going to “re-dig” the issues from six years ago, adding the hostility disappeared over time and with conversations during their Big 12 interactions and elsewhere.

“He and I never really had a negative face-to-face type confrontation or anything of that nature,” Kingsbury said on a conference call. “It was just a deal that that happened and I think we both had a certain amount of respect for each other and what we’re about and who we are and sometimes it just takes time to get back to that point.

“I think we’re in a good place. What happened happened and it was unfortunate. I obviously wish it would’ve been different and I could’ve handled things differently. But you move forward and I’ve been proud of his success and what all he’s accomplished. It’s been phenomenal to watch.” 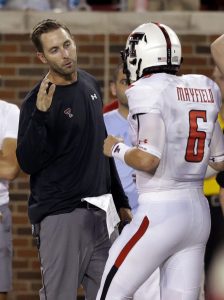 “He’s really competitive and he’s been pretty much doubted his entire life and he’s used that as motivation and used it successfully,” he said. “So I don’t really know why he would change. I’m sure people are going to love you, they’re going to hate you regardless of how you motivate yourself, but it works for him and he’s proved people wrong at every level.”

The reunion will include an interesting third party.

Cardinals rookie quarterback Kyler Murray was teammates with Mayfield at Oklahoma, took over as the starter in 2018, won the Heisman Trophy and was the No. 1 pick in the draft.

“It’s going to be fun to go out there with Kyler and compete against him,” Kingsbury said, referring to Mayfield. “There’s a lot of strong relationships there and it will be a heckuva matchup.”

Kingsbury stayed at Texas Tech after Mayfield left and coached future NFL quarterbacks Davis Webb and Patrick Mahomes. He was fired after going 5-7 in 2018 and 35-40 overall, then hired by the Cardinals, who had fired Steve Wilks after one year. Wilks is Cleveland’s defensive coordinator.

Kingsbury regrets how he handled the Mayfield situation.

“Just make sure that the communication was there to the point that he knew exactly how I felt about him and where I felt about him before it was too late,” he said. “You learn those things as you go, and the situation wasn’t what I had hoped it would be or could’ve ended up, but it obviously worked out really well for him. I’m just really excited with the success he’s had, and he’s earned every bit of it.”

“Oh, absolutely. Those are conversations that we’ve had,” Mayfield said. “So we’ve both acknowledged that an 18-year-old Baker wasn’t the all-knowing that he thought he was, and just having a conversation goes a long way.

“It’s in the past. What happened happened and we move forward.”

Both have taken huge leaps since their season together.

Mayfield walked on at Oklahoma, won 34 games, claimed the Heisman Trophy and was picked No. 1 by the Browns in 2018. Kingsbury wouldn’t have let him leave if he thought he’d become the player he is, but said he saw signs.

“You could see the skill set and how talented he was and, to be honest, a guy like that he just refuses to be denied,” Kingsbury said. “And the more people tell him he can’t do something, the more he wants to prove them wrong, and he’s done it at every level.

“He’s a winner. Tremendous competitor. I just remember as soon as you installed anything, he could go out there and execute it at a high level the first time doing it and for a young player, a true freshman who wasn’t there all summer, I was really blown away by that. He continued to get better and better and playing at a high level and you could tell he was going to have a great career.”

The Cardinals hiring Kingsbury surprised many in the NFL, especially given his relative inexperience and losing record at Texas Tech. But Mayfield had seen NFL traits.

“Kliff was successful in college when he played,” Mayfield said. “He went to the NFL, had a little career and got back into coaching because he’s a brilliant offensive mind. Players love playing for him. I know that just from personal experience, obviously, and they adapt to what he does.”