Nick Chubb in position to win NFL rushing title, but his focus remains on wins 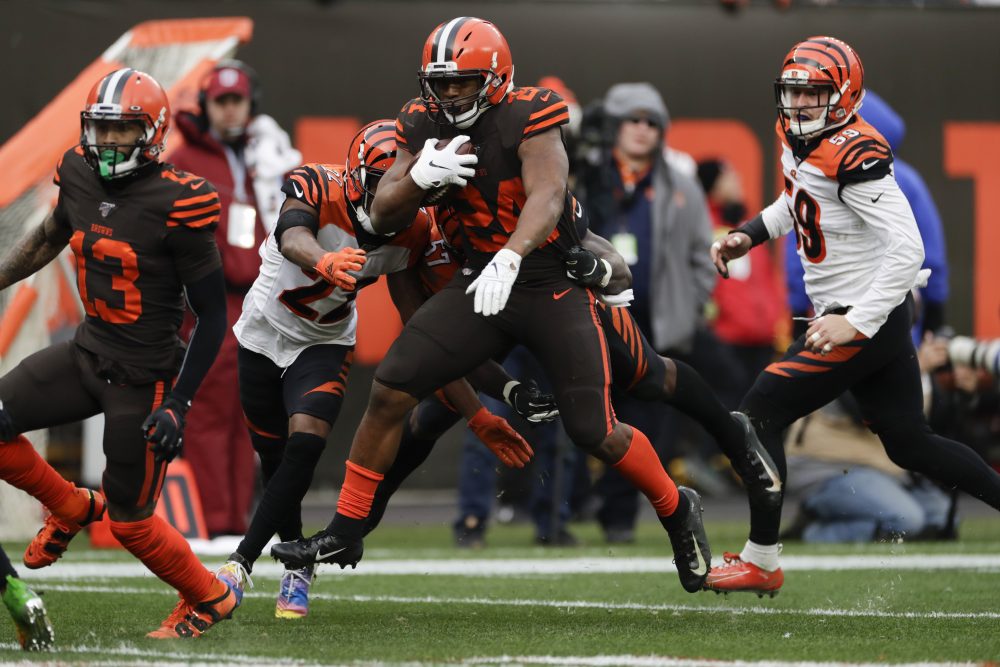 BEREA — If Nick Chubb can hang on and win the NFL rushing title, he’ll celebrate the accomplishment.

Not for the fame. Or a bonus. Or any endorsement deals that could come his way.

But because of what came before he was crowned the champ.

“It will mean a lot to me only because how hard I worked and it paid off for me,” he said Wednesday. “That’s really the biggest thing for me is just when I work hard, it shows and I get the results that I want.”

With three games left, Chubb leads the league with 1,281 rushing yards. He’s 38 ahead of Tennessee’s Derrick Henry and 61 in front of Carolina’s Christian McCaffrey in the three-horse race.

“Not really at all,” he said. “I wasn’t paying attention at first to get where I’m at, so I’m not going to start now. I’m just going to keep playing every week, preparing, starting the practice like today and keep working.

“If I keep working like I am, things will happen for me in the right way, so I’m counting on that.”

He’ll let others think about and talk about the title.

And there are plenty of people to do that, which shows its importance and how much they love Chubb. The Browns haven’t had a rushing champ since Leroy Kelly had 1,239 yards in 14 games in 1968.

“It would be cool, man,” left guard Joel Bitonio said. “Talk about a guy that deserves something like that, get some credit where it’s due. He’s the same guy every day, runs his tail off, doesn’t say anything, doesn’t complain, just does his job.

“I’d be really excited for him. That would be something you could look back on someday and be like, man, we got Nick Chubb a rushing title. It would be cool, but we’re trying to focus on one week at a time and see where we’re at in the end.”

Chubb is the captain of that approach. He puts his head down, lifts weights, practices hard and works toward one goal: winning.

The point was driven home during an NFL Films clip from the 41-24 win over the Dolphins. Receiver Odell Beckham told Chubb on the sideline, “I want to score a touchdown.” Chubb countered with, “I want to win.”

“First off, I will answer that question by saying that is the last thing on Nick Chubb’s mind. He wants to win this week. He wants to go 1-0 this week,” he said. “Anytime a guy as special as Nick is as a person and a player receives any type of recognition, it is deserved. I do not think his end goal is to win any kind of title, except the last title.”

“It means a lot. Definitely to me and this whole organization, we’re all in this together,” Chubb said. “I’m just happy to be able to do it for the Cleveland Browns and to be a part of this journey that I’m on.

“I’m happy I have everyone here with me going through it with me. Everybody plays a part. The blocking, the guys block on the outside, the receivers, the O-line — just everyone. It is not just me.”

He’s a grinder with his blue-collar attitude and team-first approach, but he provides plenty of sizzle with his long-distance runs. He has eight in his career of at least 40 yards — tied with the Giants’ Saquon Barkley for the most in the NFL in the last two years — including four this year. He had a 57-yarder on the first drive of the second half Sunday vs. the Bengals to set up Kareem Hunt for a 3-yard touchdown run.

He can run away from a defense with world-class speed or reverse field, break tackles and carry defenders.

“He’s just explosive,” Bitonio said. “You see his size, you see his power and you see his breakaway speed and I don’t think people are ready for that even if they’ve watched it on tape before.”

The fans have embraced everything about Chubb and were chanting his name Sunday at FirstEnergy Stadium.

He left a message for the fans last week on Instagram.

“I’m whatever Cleveland needs me to be,” he posted.

The reason for the message?

“That’s just a Batman quote. I like Batman,” he said. “That’s pretty much it. Don’t look too deep into it.”