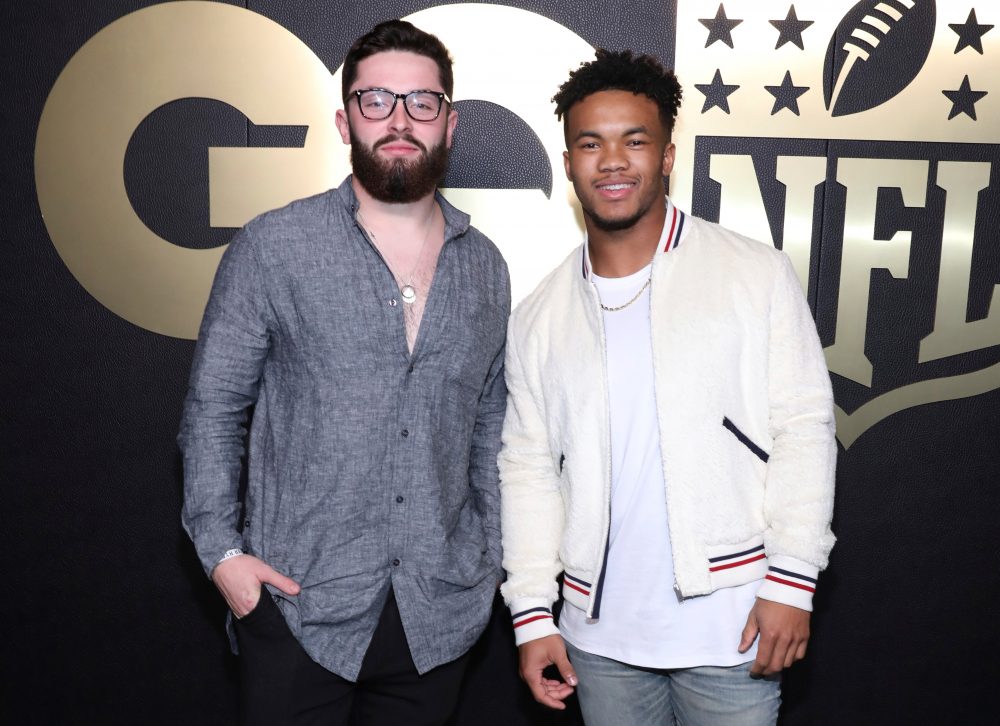 The Baker Mayfield-Kyler Murray matchup on Sunday in Arizona is more than the ultimate University of Oklahoma recruiting tool.

It’s about having the upper hand in a close but competitive friendship.

“Anytime you see a familiar face in competition it makes it something you want to strive to have a little bit of bragging rights over,” said Mayfield, who will lead the Browns (6-7) against the Cardinals (3-9-1) in another must-win. “Something just to enjoy and have more fun.”

“It’s kind of special just being able to be on the same field, opposing teams,” Murray told reporters in Arizona.

He watched for two years at Oklahoma as Mayfield put up huge numbers and won the Heisman Trophy in 2017. As Murray waited and learned, he competed against Mayfield in practice and told him he was better, at least in certain aspects of the game.

“Just throughout practice all the time,” Murray said. “It was just back and forth. He knows it.”

When Murray got his chance, he matched Mayfield throw for throw, threw in some runs and won the Heisman in 2018. He then made Oklahoma the only school to produce quarterbacks who became back-to-back No. 1 picks in the NFL Draft.

“I am obviously very happy for him,” Mayfield said. “I remember I was eating dinner with my family when he won the Heisman last year and just how excited I was for him. He deserves all of that, and it is going to be really fun to play against him.”

Murray joked during the week he “learned what not to do” from watching Mayfield behave and spoke of their different leadership styles. He also acknowledged Mayfield’s success at Oklahoma gave him confidence.

“That’s my boy,” Murray said. “To the public, obviously, he’s kind of a rebellious guy, but he’s a great dude. I look forward to playing against him on Sunday.”

Mayfield had gone through the transfer process, so he helped Murray adjust to sitting out the first year.

“But then moving forward, Kyler probably did a lot more for me than I probably did for him just pushing me to be better,” he said. “Whenever you have a guy like that behind you, it is really going to push you, so that is why I truly believe competition raises all levels around you. I am thankful for that.”

Mayfield and Murray getting drafted No. 1 shows just how much the NFL has changed and continues to evolve.

At less than 6-foot-1, Mayfield was the shortest quarterback to be drafted first since Michael Vick in 2001. Mayfield doesn’t approach Vick’s athleticism, and his success despite not having ideal size made it easier for the Cardinals to take a chance on Murray, who’s 2½ inches shorter than Mayfield.

“Yeah, I think the game’s evolved, and he was a part of that,” Murray said.

“Kyler is just a phenomenal athlete. He is one of a kind,” he said. “He is the only one ever to be drafted first round in baseball and football.

“Just his arm talent alone is very special. The things he is able to do when he throws the ball, it comes out different. Obviously his speed is next level. He is very quick and you try tackling him in a phone booth. He is a tough guy to defend.”

“I can’t say nothing about his height,” defensive end Chad Thomas said of Murray. “He goes out there with everybody else, 11 people on the field. I know he’s got a big heart, so he comes to play.”

Mayfield had a stellar debut season, setting the NFL rookie record with 27 touchdown passes and winning seven games for a Browns franchise that was coming off 1-15 and 0-16 seasons. Murray doesn’t have the wins with the Cardinals but he quickly proved he belonged.

He’s completed 64.1 percent for 3,060 yards, 16 touchdowns, nine interceptions and an 86.9 passer rating. He’s had seven games with multiple touchdown passes, and only four rookies have more in NFL history, including Mayfield, who set the record with nine. Murray also has four 300-yard games.

“I don’t think this young man gets enough credit for his ability to throw the football,” defensive coordinator Steve Wilks said. “He does a tremendous job in getting the ball where he needs it to be.”

If Murray’s arm gets overlooked, it’s because he also threatens defenses with his legs. Browns players said Murray looks to throw when he scrambles and will throw the ball away, but he still leads the Cardinals with 448 rushing yards and four touchdowns.

“You’ve gotta have answers for him. We’ve definitely got a plan to slow him down a little bit.”

Mayfield has stumbled during his second season, completing 59.2 percent with 15 touchdowns and 16 interceptions for a league-worst 77.6 rating. He was 11-for-24 with two interceptions last week in an ugly win over the Bengals.

“It is all of the little details that affect those stats,” he said. “As long as we win, ultimately, that is the main goal, but you have to continue to work on that stuff, get the ball in our guys’ hands and let them make plays.”

The Cardinals should give him plenty of chances. They rank last in the league against the pass, allowing quarterbacks to complete 71.8 percent for 4,050 yards, 32 touchdowns, six interceptions and a 113.9 rating.

“He continues to identify pressures, and his eyes are getting better,” coach Freddie Kitchens said. “He is not a finished product. He is a second-year player. He is seeing more coverages this year, he is seeing different looks. He knows where he wants to go with the ball most of the time, and he does a good job of identifying and being able to communicate and understanding what we can do to attack certain instances.”

The matchup with Murray is bigger than a Sooners reunion or bragging rights. The Browns are clinging to dwindling playoff hopes. They need help across the AFC, but won’t have a chance without three more wins to end the season.

“It starts with winning this Sunday, and if we don’t win this Sunday, then everything is out the window anyway,” Randall said. “So we’re going to try to control what we can control and just kinda hope the football gods (are) looking out.”