Freddie Kitchens makes it clear he wants to return, but focus remains on task at hand not job security 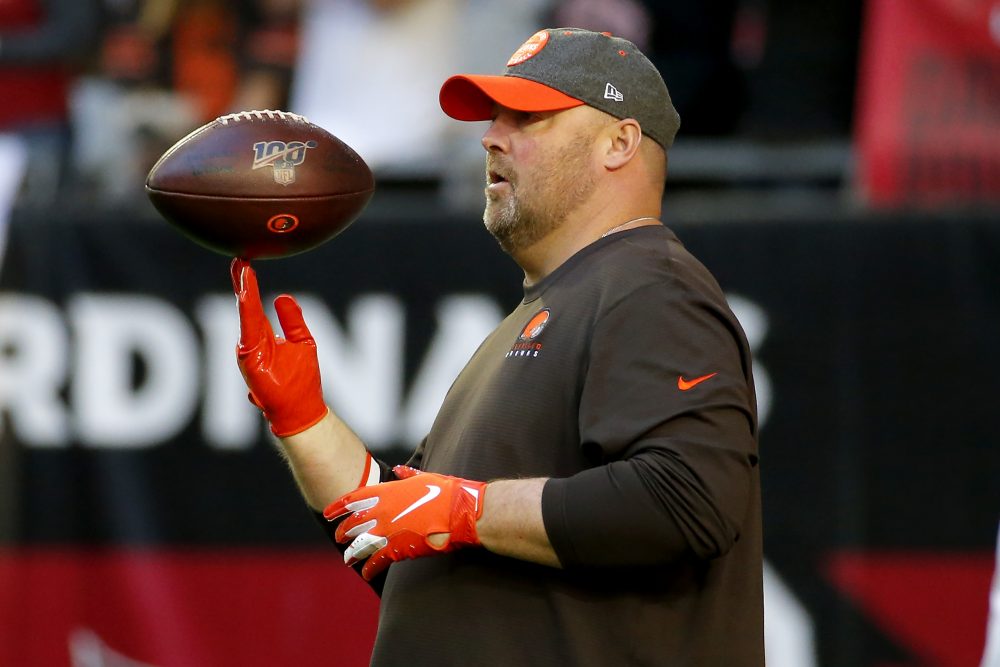 “Of course, I wanna be back,” he said Monday. “Listen, we can make it all bad all we want, but we’ve done some good things this year.”

That Kitchens had to explain his desire to return speaks to the kind of year it’s been for the first-time head coach. He can’t seem to get out of his own way.

After the 38-24 loss to the Cardinals on Sunday, he was asked how the embarrassing defeat affected his future as Browns coach.

“I don’t care about my future as Browns coach,” Kitchens said. “I’m going to show up Monday, and I’m going to do the best job that I can do Monday.”

The critics ignored his intent to focus on the present and ran with the sound bite, especially ESPN analyst Dan Orlovsky, who called for Kitchens to be fired immediately by owners Dee and Jimmy Haslam and general manager John Dorsey.

“Let me clarify, I care about my job,” Kitchens said Monday. “I only care, though, about getting better today. That’s what I was trying to illustrate, is I’m only focused on today, on getting this football team to play to the best of their ability today and to increase those chances of us getting to that point on Sunday, of playing the best that we can on Sunday. Everybody here is focused on that.

“Dee and Jimmy Haslam and John Dorsey would much rather me be worried about getting our team to play better than worried about my job security.”

Analysis: Disastrous loss in Arizona turns up heat on Kitchens

The Browns are 6-8 and have less than a 1 percent chance of reaching the playoffs, according to ESPN’s analytics, after falling to the Cardinals, who had lost six straight. The Browns have already gone an NFL-high 16 straight years without reaching the postseason and will finish the decade without a winning season, so this isn’t new. But this year was supposed to be different after going from 0-16 to 7-8-1 last year and stockpiling talent in the offseason.

“We’ve got all the pieces and it’s just going out there and playing as a team and everybody playing hard each and every play and no taking plays off or nothing like that and just finishing,” running back Kareem Hunt said. “I feel like there were some plays that everybody didn’t leave their 110 percent out there through the whole play, through the whole whistle. And we’ve all got to do that if we want to be successful.”

Kitchens’ uncertain job security will be a topic for the last two weeks of the season, and issues continue to crop up that could be factors in the decision whether to retain him.

Hunt questioned the players’ effort Sunday, left guard Joel Bitonio said the team didn’t come out ready to play in a must-win game and receiver Jarvis Landry barked at Kitchens on the sideline in frustration. That’s not the first time it’s happened, as tight end David Njoku was heard yelling at Kitchens a week earlier against the Bengals.

Things haven’t been better between the lines.

The offense, with Kitchens calling the plays, has failed to reach 20 points in seven games despite having quarterback Baker Mayfield, receivers Odell Beckham Jr. and Landry and running backs Nick Chubb and Hunt. The defense is 27th against the run and hasn’t been able to overcome the loss of ends Myles Garrett (suspension) and Olivier Vernon (knee injury) and safeties Eric Murray (knee), Morgan Burnett (Achilles) and Jermaine Whitehead (cut after making violent threats on social media).

“There’s a lot of good here. It’s just we get so swept up in the negative that we can’t see the positives and that’s what we need to continue to try and focus on in our building,” Kitchens said. “And that’s the main reason you try and block out the noise and just concentrate on getting better, and that’s what I want to do as a coach and that’s what I want my players to do as players. And I think they’ve done a good job of that during the course of the year.”

Kitchens pointed to Chubb leading the NFL with 1,408 rushing yards, Landry at 1,018 receiving, Beckham at 910 and a defense that ranks third on third down.

“So we just need to execute better when we get to those critical moments in a game,” Kitchens said, again pointing to the team’s inexperience, especially with winning. “We have a young core of a team here. Everything we are doing is for the first time. We have to adjust, make exceptions for that and do a better job of preparing them, do a better job of playing when we get to the game and executing.

“You gain experience by going through the fire and doing it. I think we have a lot of guys that are gaining valuable experience of doing that, and it is going to serve us well going forward.”

Beckham and Landry have had issues with the game plans and their usage throughout the season but came to Kitchens’ defense after the game.

“We have nothing but respect for Freddie,” Beckham said. “I love him.”

“I like the guys I coach,” he said. “I like the energy and the passion our guys play with. In our room and in our building, we are in it together. We built that through being through the fire together.

“We are going to stay together these last two weeks. I don’t care what happens, these guys will stay together. Now we just have to perform better.”

That includes Mayfield, who went 30-for-43 for 247 yards, two touchdowns, an interception and a 90.0 rating vs. the Cardinals. His numbers got a big bump from a garbage-time touchdown drive that included 11 completions for 94 yards and a touchdown.

“We know who we drafted, and I am happy as hell that we drafted him,” Kitchens said. “He is going to be our quarterback for a long time, and he needs to continue to get better, just like we all do.