Notes: Kareem Hunt questions team’s effort: “Everybody didn’t leave their 110 percent out there” 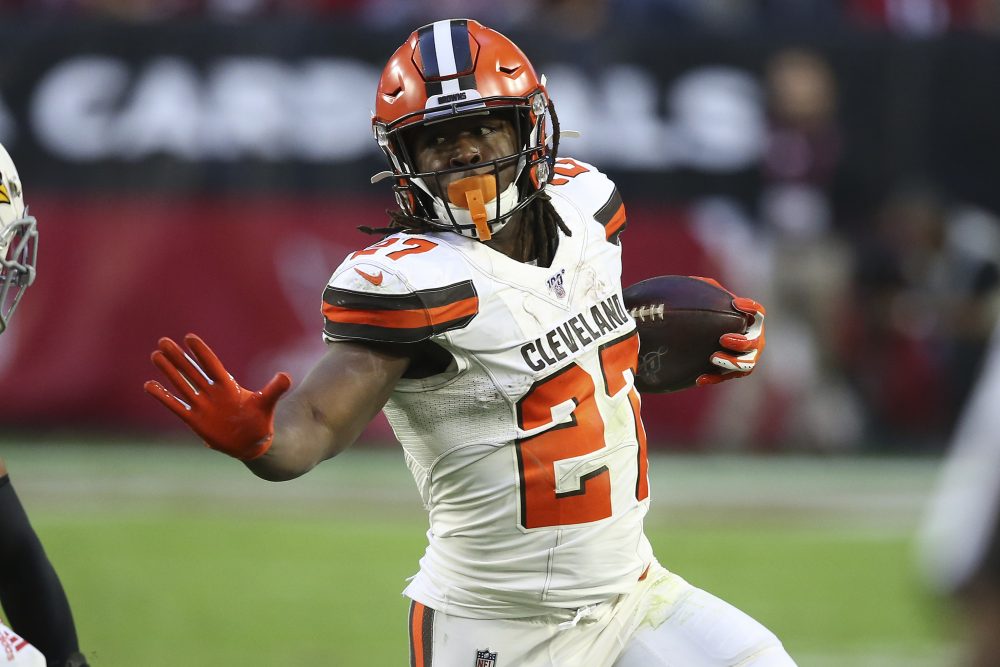 BEREA — Kareem Hunt wasn’t satisfied with his teammates’ effort Sunday in the 38-24 loss to the Cardinals.

“We’ve got all the pieces and it’s just going out there and playing as a team and everybody playing hard each and every play and no taking plays off or nothing like that and just finishing,” the running back said Monday.

He didn’t back off when asked to elaborate.

“Yeah, I feel like there were some plays that everybody didn’t leave their 110 percent out there through the whole play, through the whole whistle,” he said. “And we’ve all got to do that if we want to be successful.”

Hunt, who caught a career-high eight passes for 62 yards and rushed four times for 14 yards, said the problem was team-wide.

“You can’t point out one person or nothing like that,” he said. “It’s everybody, and everybody’s got to do their job.”

Coach Freddie Kitchens spoke to reporters before Hunt but was asked if the defense quit as it allowed 445 yards, including 226 rushing.

“Those guys kept fighting. I don’t think there is any quit in anybody out there,” he said. “I don’t know how you distinguish that, but I know those guys fought to the very end.”

Free safety Damarious Randall said he didn’t sense a lack of effort and disagreed with left guard Joel Bitonio, who said after the game the team came out flat.

“I thought we were ready to play,” Randall said. “They converted a couple third downs that if we get those and get off the field and force them to field goals, it was a totally different game.

“So I really wouldn’t go to that far extent and say that we were flat. They were making plays and we weren’t, simple as that.”

The Browns had started fast in recent games but fell behind 14-0 to Arizona.

“We pretty much waited for them to punch us,” Hunt said. “At halftime we came out fighting and stuff like that. But you can’t wait that long. You’ve got to be ready as soon as the freakin’ kickoff starts, that’s what we’ve got to do.

Hunt wouldn’t answer a question about players possibly questioning Kitchens’ leadership, saying he’s only worried about himself. He’s not concerned about his effort level.

“I’m one of those guys that’s going to go out there and lay my body on the line each and every play,” Hunt said. “If you don’t come out ready to play — I’m always excited to step out onto that field.”

He said the mentality is cultivated within a team starting in the offseason.

“You can’t just wake up one morning and say, ‘That’s how I’m going to have to start playing football,’” he said. “I’ve been playing football like that since college, since Kansas City, now here. It’s got to be contagious to everybody.

“If we do that, usually good things happen if you’re playing with great effort.”

The Browns (6-8) can’t afford anything less than an inspired effort Sunday when the Ravens (12-2) visit FirstEnergy Stadium.

Kitchens was most frustrated with the defense’s inability to stop the run.

“Not fitting our gaps and shedding blocks,” he said. “I thought they did a good job of putting our eyes in the wrong place. We did not do a good enough job once we were in situations to make the play — we did not make the plays.”

“We are never going to make excuses, but we did have two pretty good ends. We had two safeties that were playing pretty good,” Kitchens said.

“That’s tough, that’s not like our defense,” Hunt said. “Our defense is better than that. We’re missing some key pieces on that side of the ball and it shows. We need the new guys to step up, we need those guys to buy in and come out, show up.”

Tight end David Njoku said he was surprised by Kitchens’ decision to make him a healthy inactive against the Cardinals.

“It is what it is. I can’t really say anything upon it because it wasn’t my request, so I’ve just got to keep going,” he said.

Njoku returned from injured reserve the previous week against the Bengals but struggled, having the ball ripped out of his arms for an interception. Kitchens scolded him for the play on the sideline and Njoku yelled back.

Njoku was asked if the benching was a punishment for that.

“That’s a good question, but I don’t know that,” he said, adding he wasn’t given a reason.

He had missed 10 games with a broken wrist and hopes to be back in the lineup Sunday against the Ravens.

“Just continue working, focus on what I can control, work every day in practice and go from there,” Njoku said.

JUST THE WAY YOU ARE

Receiver Jarvis Landry barked at Kitchens on the sideline during the fourth quarter because he wanted to be more involved in the offense, but Kitchens said he wasn’t bothered by it.

“I wouldn’t change Jarvis for anything,” he said. “Jarvis plays the game with passion, which I love. He is tough. He is physical. He wants to win. When you want to win as badly as Jarvis does, sometimes your emotion gets the best of you.

“I don’t have a problem with Jarvis. He is one of my favorites the way he plays the game, him as a person and everything.”

Pittsburgh’s loss to the Bills on Sunday night kept the Browns (6-8) mathematically alive for the playoffs. Here’s what they need to happen to make it: Win their last two games, the Steelers (8-6) and Titans (8-6) both lose their last two and the Colts (6-7 before Monday night) and/or the Raiders (6-8) also finish at 8-8. The Browns need at least one team to join them, the Steelers and the Titans at 8-8 due to the complicated tiebreaker system.

** Nick Chubb was tops among AFC running backs after the fan vote for the Pro Bowl. The rosters will be announced Tuesday night at 8.

** Receiver Rashard Higgins was active but didn’t play an offensive snap for the second straight game. KhaDarel Hodge played 30 of 70 offensive snaps as the third receiver, and Damion Ratley 21. Ratley had two catches for 33 yards.