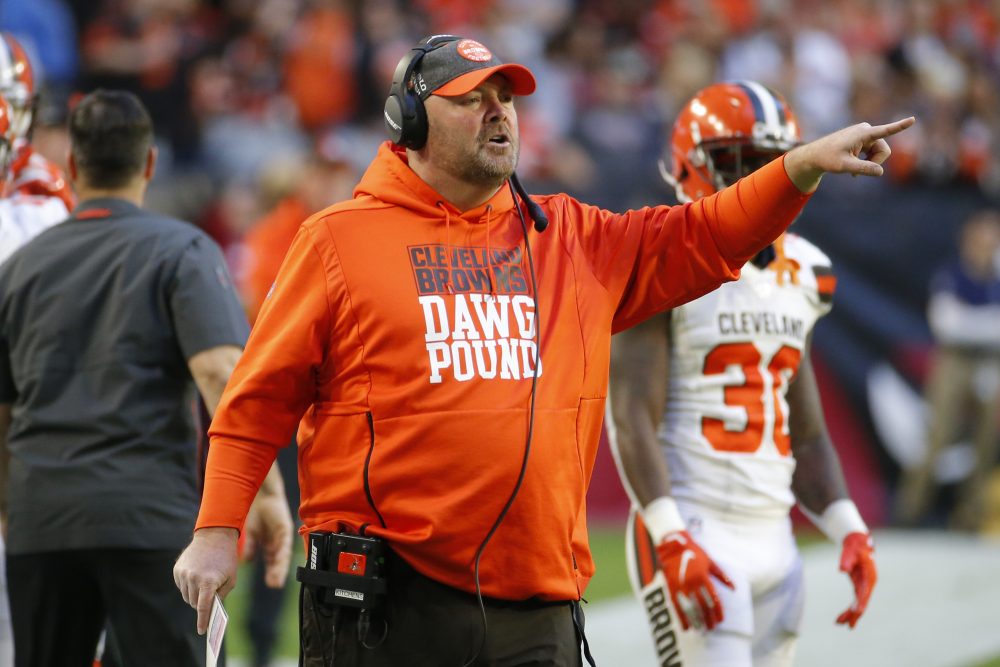 This would be a good time for coach Freddie Kitchens to enhance his resume.

As owners Dee and Jimmy Haslam and general manager John Dorsey weigh Kitchens’ merits to return, he could use a few more pros to counter the list of cons compiled throughout his rocky rookie year.

The visit from the red-hot Ravens on Sunday presents a golden opportunity.

“It would be a big win,” left guard Joel Bitonio said.

Any victory over a rival looks good. This one would mean more.

The Ravens are 12-2, winners of 10 straight and clinched their second straight AFC North title. They haven’t lost since a 40-25 setback to the Browns in Week 4 in Baltimore and a win would secure them the No. 1 seed throughout the AFC playoffs.

If the Browns (6-8) pull off the upset, they would have toppled the favorite to win the Super Bowl while sweeping the Ravens for the first time since 2007. That would be significant for Kitchens, whose job security took a big hit with the 38-24 loss in Arizona last week.

“It’s Freddie, it’s the whole team, if we can get a win this week, we win next week, go 5-1 in the division this year, it’s a confidence boost for the team going into hopefully the playoffs if things go our way, or if not, the offseason and next year,” middle linebacker Joe Schobert said. “If we do that, you can prove to yourself you can play with anybody in the NFL and people have to take that lesson and apply it to every single week to get the results that we need to get to be a successful team.”

The record inside the AFC North matters.

The Browns are 3-1 in the division for their best winning percentage since it was formed in 2002. They’ve beaten the Ravens, Steelers and Bengals in the same season for the first time. With the finale next week in Cincinnati, they could go 5-1.

The record at home matters.

The Browns have never swept the North at home in a season but could do so with a win over the Ravens. That would be five straight victories at FirstEnergy Stadium after starting the season 0-3 there.

“I have not really focused on what has happened,” Kitchens said. “I am just trying to make it through this week to make sure our guys are prepared for this week and make sure their concentration and focus is on this week. That is it.”

The decision to keep or fire Kitchens isn’t an easy one.

The Haslams have longed for continuity despite firing four coaches in eight years as owners and could be reluctant to fire a second one after one season (Rob Chudzinski in 2013). And it’s difficult for anyone, including Dorsey, who was in charge of the coaching search, to admit such a large mistake after less than a year.

Kitchens is the play caller, and the offense is only 21st in the league in scoring (21.2 points) despite having quarterback Baker Mayfield, receivers Odell Beckham Jr. and Jarvis Landry and running backs Nick Chubb and Kareem Hunt.

Kitchen has also had missteps in the CEO role, including wearing a “Pittsburgh started it.” T-shirt before the Browns lost the rematch with the Steelers.

Mayfield appreciates that Kitchens isn’t consumed by his future.

“He is not focused on, ‘Oh, do I need to cover my own a– for my own job,’” he said. “We are worried about the Ravens right now and that is the most important thing. It does not need to be any selfish motives. It is what you can do for this team and this organization to help us get to the right place.”

Many of the players have been through this coaching uncertainty as a season winds down. It’s never easy.

“I’ve been here long enough. I don’t get caught up in the drama,” third-year defensive tackle Larry Ogunjobi said. “It’s always some kind of drama or something or media going on. I’m not really trying to be a part of that trend.

“All I can do is control what I can control, those are decisions that aren’t really up to me. He’s my coach and I’ve got to stand by him. I’m not big with the whole divisiveness and all of that kind of stuff that can arise when certain things transpire.”

The loss to the Cardinals gave Kitchens’ critics plenty of fuel. The Browns were overmatched by a team that had lost six straight, their effort was questioned and Landry barked at Ktichens on the sideline.

The pressure was on this week for Kitchens to make sure his team’s prepared and plays with passion.

“If you lose badly, somebody did not get ready, and that falls on me,” he said. “Our guys have come back this week with great energy, have prepared that way and have taken it to the practice field. I am very pleased with them.”

“Guys are invested. Guys continue to come to work, show up and work hard, as hard as they can, and that’s really all you can ask of them,” said Landry, who has defended Kitchens since the sideline blowup.

Kitchens, in his first time as a head coach, walked into a mountain of expectations. The Browns were coming off a 7-8-1 season, Mayfield shined as a rookie and Beckham was acquired in a trade. They’ve fallen well short of the Super Bowl prediction of some, but special teams coordinator Mike Priefer said all is not lost.

“What I like about this team is that we have done things that no other Cleveland team has done at least since the divisional realignment,” he said. “We have the opportunity now to beat Baltimore twice and Cincinnati twice. We have accomplished a lot of things this year. The fact that two years ago this franchise was 0-16 and we are sitting here at 6-8 and we are complaining about it …”

With two games left, Kitchens still has time to sway the jury.

“If we win these last two games, it would be huge for this team and the confidence going forward,” Schobert said. “Obviously everybody in this organization can learn and needs to learn and grow, but I think Freddie’s a good guy and good man at the head job.”

The season turned — the wrong way — after Week 4 win over Ravens
Bryan Cox’s football career got going at Avon High School, and his motor hasn’t stopped since