Defense can’t hold up, or hold down Lamar Jackson, as Ravens find groove at end of 1st half, roll to win 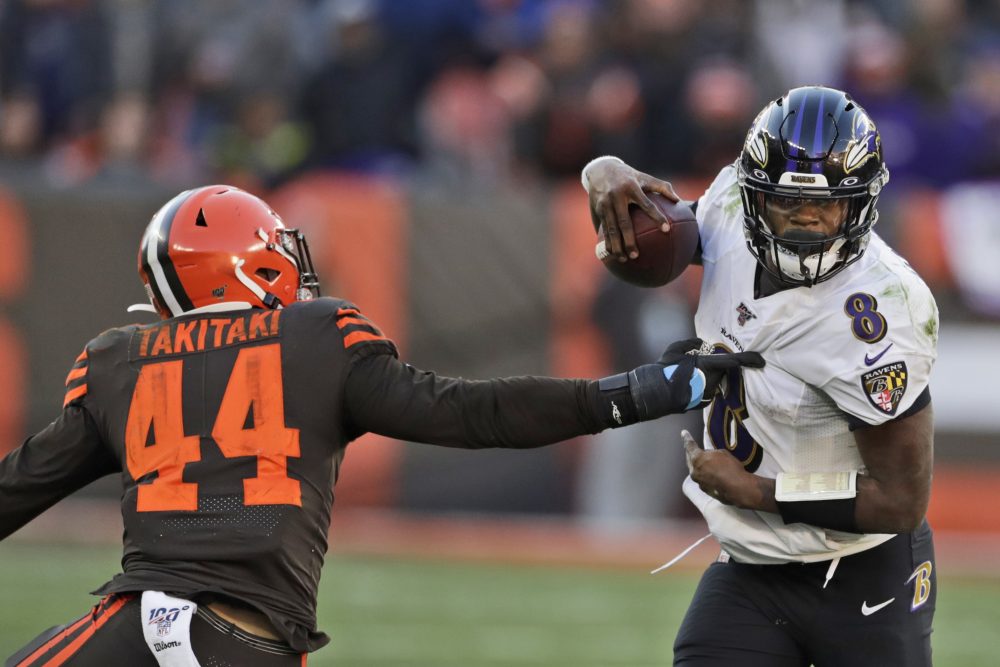 CLEVELAND — The Browns defense had a tall task in front of it Sunday, and for most of the first half it managed to keep the Ravens’ No. 1 offense under control

But once Baltimore got a taste of the end zone, it feasted for the rest of the game.

The Ravens scored on five straight possessions after being stopped on their first four in a 31-15 win over the Browns at FirstEnergy Stadium.

“You can only hold the good offense down for so long,” Browns safety Damarious Randall said. “I mean, they’ve been putting up numbers and points on everybody and I feel like we had them right where we wanted them and we just didn’t capitalize. And for whatever reason, it resulted into a loss. We’ve just got to watch film and see what we can get better at.”

Cleveland stood tall on Baltimore’s first drive, which started from its own 14-yard line. One play later, Mark Ingram got the Ravens to their own 41, eventually driving to the Cleveland 45.

Cornerback Denzel Ward made a first-down-saving tackle on tight end Mark Andrews, then on fourth-and-3 Ward played tight coverage on Andrews to force an incompletion.

On its second drive, Baltimore again started inside its own 10-yard line, but moved the ball efficiently towards midfield when Lamar Jackson committed his worst mistake of the day — fumbling an exchange with Ingram that Cleveland’s Porter Gustin recovered.

“At the end of the day we had an opportunity to win the game, we had them right on the ropes where we wanted them,” Randall said. “We held them to zero points damn near the whole half and then next thing you know, I don’t know. I’m going to just go watch the film. Cause everything’s moving so fast, I don’t really know what happened. I’m going to go watch the film.”

Jackson and Andrews bounced back, big. The Ravens broke loose on their fifth drive of the game — Ingram with a 24-yard run and Jackson found Andrews wide open in the end zone for a 39-yard touchdown, giving the Ravens a 7-6 lead with 1:18 left in the half.

Despite not having any timeouts, Baltimore got the ball back 23 seconds later and ran the hurry up to perfection. Not only were Ravens receivers able to gain at least 11 yards on three catches, but they also managed to get out of bounds each time to stop the clock.

The Browns collapsed the pocket on Jackson and almost delivered the knockout blow but he stepped up and found Andrews in the end zone from 14 yards. His big tight end showed off his leaping ability, going over Cleveland defenders for the catch.

“The offensive momentum felt different,” Jackson said of the first touchdown. “I don’t know what defense they were in. They blew the coverage. We stayed to the left. Mark was just wide open. He did a great job of just giving me eyes.”

The floodgates were officially open. Baltimore scored to open the half, then added 10 more on its next two drives. The only time the Ravens failed to score was their last drive — when they kneeled and ran out the clock.

Baltimore finished with 481 yards — 243 on the ground — with Jackson showing everyone why he’s the front-runner to be named the league’s MVP. He finished with 238 passing yards, competing 64.5 percent for three touchdowns, and led the team in rushing with 103.

Andrews was his favorite target, finishing with six catches for 93 yards and two touchdowns.

“He has definitely been doing that consistently for a long time now,” Ravens guard Marshal Yanda said of his quarterback. “He’s obviously very special in what he does in space and throwing the football and all of those things. Obviously, we have done it for weeks in a row without really any drag. I know we had some drag in the first quarter into the second quarter, but then, boom, we got hot and he diced them up fast. That has been pretty awesome to watch him do that consistently for that many games. That is hard to do.”