Notes: Sheldon Richardson upset he was taken out of game by Freddie Kitchens after “protecting a teammate” 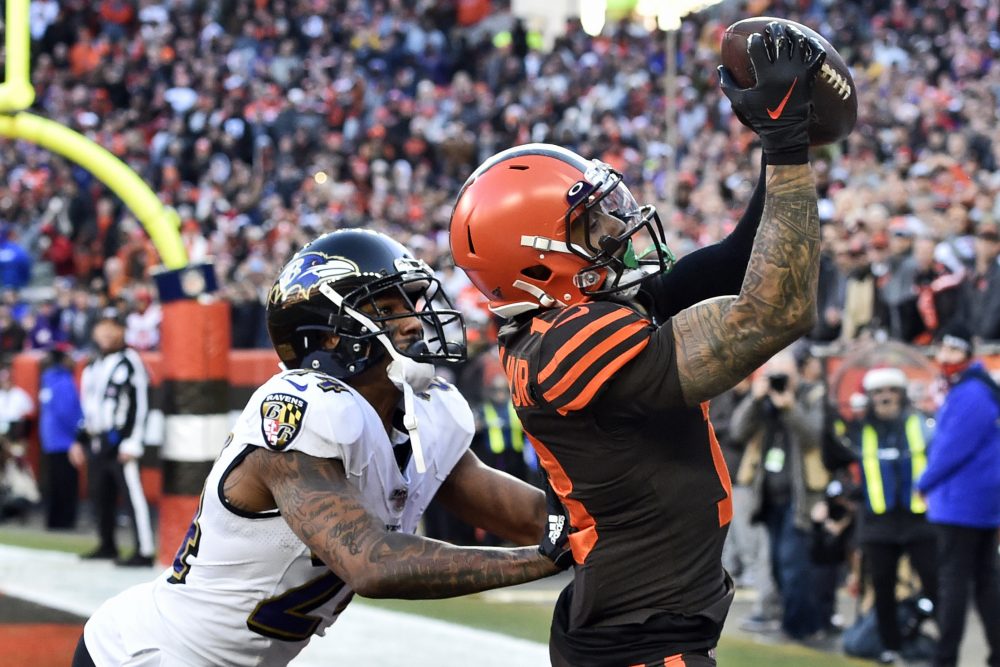 He thought better of answering this one: Did it frustrate you when coach Freddie Kitchens took you out of the game?

“Next question,” Richardson said after a long pause.

Richardson was benched by Kitchens with 3:45 left Sunday and the Ravens well on their way to a 31-15 win over the Browns. He threw his helmet when he reached the sideline and kicked something.

He had just been called for unsportsmanlike conduct.

“I wasn’t frustrated. I was protecting a teammate,” Richardson said.

Rookie safety Sheldrick Redwine stayed down with an injury on the Ravens sideline after a play. Richardson went to check on him and exchanged words with Ravens cornerback Marcus Peters.

“Redwine had got down. Marcus Peters was standing over him,” Richardson said. “I thought he was like kneeing him in his head or whatever he was doing. He was just playing around, but he can do it with somebody else’s teammate, not mine.”

The official objected to Richardson’s presence and conversation on the sideline, according to Richardson, and threw the flag. Kitchens said the official told him Richardson wouldn’t leave when told.

Defensive end Chad Thomas yelled at the Ravens sideline as Redwine was attended to, and Kitchens didn’t doubt that something was going on between his players and the Ravens. He just wanted them to listen to the officials.

“It was just too many Ravens around my guy on the ground, and I wasn’t leaving until he got up off the ground,” Richardson said. “It’s just that simple. I was always taught protect the teammates.”

Redwine was eventually able to walk across the field.

Richardson had an active game. He had three tackles, a quarterback hit, two passes defensed and a forced fumble. He was also called for roughing the passer with a late one-hand shove of quarterback Lamar Jackson.

Defense can’t hold up, or hold down Jackson, as Ravens find groove, roll to win

The star wide receiver let things boil over on the sideline, throwing his helmet and engaging in a heated conversation with Kitchens after a failed 2-point conversion attempt in the fourth quarter.

“I think it was something dealing with one of their guys,” Kitchens said. “I was not the call or anything like that. I do not think there is a big deal there. He is voicing frustration on how they are treating him.”

Beckham fought with Ravens cornerback Marlon Humphrey during Cleveland’s Week 4 win, resulting in each player being fined $14,037. With the officials on high alert Sunday, Beckham was penalized 15 yards for taunting after his first reception, a 22-yard gain. He celebrated by putting his hand under his chin and waiving while on the Baltimore sideline.

“I thought it was pretty stupid that I got a personal foul for a celebration that I’ve done all year,” Beckham said. “It’s not like there was a player in front of me, or anybody. It was very unintentional. But it is what it is.

“The whole field is facing this way and I’m facing (the other) way. I’m not talking to nobody.”

Beckham finished with four catches on six targets for 44 yards and a touchdown — his third of the year. He needs 46 yards in the finale at Cincinnati for his fifth 1,000-yard season in six years.

“That was just a good one-on-one opportunity,” quarterback Baker Mayfield said of the touchdown. “Teams have played us differently so we just have to take advantage of our one-on-ones. That was just one of them that we trust our guy to make a play, and he did.”

MUSIC TO HIS EARS

Mayfield hadn’t talked to reporters since Beckham said Wednesday he’d be back for 2020, ending speculation he wanted to leave and would try to force his way out. The same day receiver Jarvis Landry adamantly denied a report he told the Cardinals during the game last week to “come get me.”

“That is the same message I have been hearing from him the entire time so nothing has really changed with that,” Mayfield said of Beckham. “It just calmed the waters from the outside, which I think it was important for him and Jarvis to do just so that people aren’t questioning them everywhere they go. They want to be here and they want to win.

“Like I said earlier on and consistently, they want to be the solution to help us win so it is good to hear, but it has been the consistent message.”

AN A FOR EFFORT

Mayfield was pleased with how the team responded after running back Kareem Hunt questioned the effort last week in a 38-24 loss at Arizona.

“We definitely played hard,” Mayfield said. “Our guys laid it all out on the line. That is what we expect.”

Kitchens and other players had been adamant the effort was strong against the Cardinals but the energy and execution were lacking.

“We don’t have no quit up in our players here,” safety Damarious Randall said. “We’ve got a bunch of news faces, a bunch of new guys trying to learn the scheme up on the go, so it’s like guys will not quit. That’s just not up in our DNA.”

Tight end David Njoku, the No. 29 pick in the 2017 draft, was a healthy scratch for the second straight game.

He missed 10 games on injured reserve with a broken wrist, returned Dec. 8 against Cincinnati, caught one pass for 4 yards and had a ball ripped out of his arms for an interception. He was heard yelling at Kitchens on the sideline when Kitchens rebuked him for not finishing the catch.

** Defensive end Olivier Vernon (knee) was inactive for the sixth time in seven games. Bryan Cox started in his place.

** Defensive back Eric Murray was active for the first time since Oct. 27 and played on special teams. He had knee surgery Nov. 1 and missed seven games.

Running back Nick Chubb rushed for 45 yards on 15 carries, giving him a league-high 1,453 rushing yards. With one week left, he leads Carolina’s Christian McCaffrey by 92 yards and Tennessee’s Derrick Henry by 124.

** Running back/kick returner Dontrell Hilliard left in the first half with a knee injury and didn’t return. He left the stadium on crutches and in a knee brace. Peters hit him low and hard.

** The Browns didn’t announce the nature of Redwine’s injury.

** Defensive end Robert McCray was elevated from the practice squad Saturday and played. Defensive tackle Brandin Bryant was waived to make room on the roster.

Notes: DT Sheldon Richardson says giving great effort is “only way I know how to play”
Notes: Nick Chubb a game away from claiming franchise’s 1st rushing title since 1968