Notes: Nick Chubb a game away from claiming franchise’s 1st rushing title since 1968 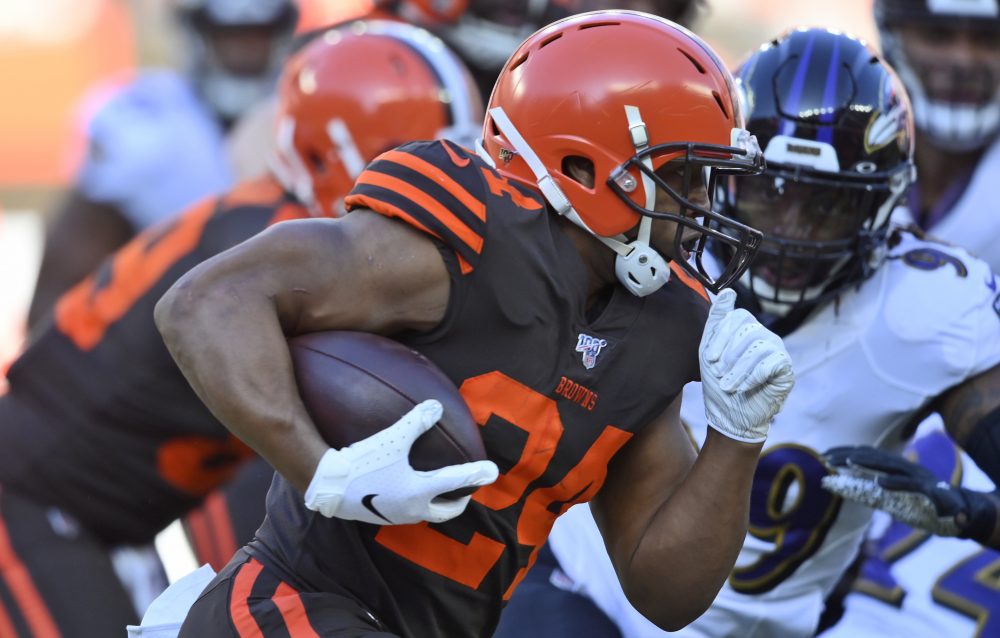 BEREA — Linebacker Joe Schobert was asked if he’s been checking running back Nick Chubb’s stats to see where he stands in the race for the NFL rushing title.

“No, I’m not that big of a Nick Chubb fan,” Schobert deadpanned, drawing a big laugh. “But he should be at the top.”

Chubb, who’s the antithesis of a self-promoter, also hasn’t examined the tote board.

“I haven’t looked, but people are encouraging me, telling me the numbers, things like that,” he said.

Chubb’s No. 1 priority is winning but said he’s taken an interest in the rushing title.

“I care because everyone cares,” he said.

Running backs coach Stump Mitchell is at the top of the list.

Chubb, the No. 35 pick in 2018, said he’d trade the title and his first Pro Bowl selection “right now” for a playoff win, but he understands the significance of being the first Browns player to lead the league in rushing since Hall of Famer Leroy Kelly in 1968.

“I appreciate it, but it’s hard to appreciate it now because things haven’t gone as well as I wanted them, too,” he said.

All kidding aside, Schobert is pulling for Chubb to finish the job.

“He’s a guy who comes in here, he’s a pro every day, he keeps his head down, does his work and doesn’t complain about anything. He just goes about his business and that’s the kind of attitude and leader you want on the team.”

Schobert may have played his final home game at FirstEnergy Stadium on Sunday. He’s in the last year of his rookie contract, scheduled to be a free agent in March and hasn’t received a contract offer from the Browns.

“No, I haven’t heard anything,” he said.

He took note that it could’ve been his home finale in Cleveland.

“When you get home, you think about it, definitely,” he said. “It was a possibility or it is a possibility, but I don’t look too far ahead in the future that way, so we’ll see what happens.”

Schobert is 11th in the NFL with 125 tackles, tied for seventh with four interceptions and was voted a second alternate to the Pro Bowl. Despite the Browns’ continued losing ways, he wants to stay.

“This is the place that gave me my chance in the NFL,” he said. “Just since I’ve been young, I’ve been a loyal guy, just the way you grew up, you play in the Waukesha West Youth Football system, you go to Waukesha West High School, you commit to a college — I mean, this day and age people transfer all the time — stay in college for four years and you get to the NFL and it’s the team that brought you into the league.

Suspended defensive end Myles Garrett has been allowed back inside the team facility for a couple of weeks, and his teammates are glad to have him.

“It was probably good for him to be out of the building for a little while to just clear his head, hopefully not look at too much social media stuff and just reset and refocus because everybody in here knows the kind of guy Myles is, and when he’s in the locker room he only adds to the presence here, so it’s always good to have him around.”

Garrett was suspended indefinitely by the NFL for hitting Steelers quarterback Mason Rudolph on top of the head with Rudolph’s helmet Nov. 14. He initially wasn’t allowed in team headquarters but is back and allowed to meet individually with the medical and athletic training staffs.

The team expects him to be reinstated for the 2020 season.

The first of coach Freddie Kitchens’ head-scratching decisions Sunday came with about 5½ minutes left in the first quarter. The offense stayed on the field on fourth-and-5 from the Baltimore 47-yard line, but receiver KhaDarel Hodge ran on late as a sub for Damion Ratley, Kitchens called timeout and sent out the punting unit.

“We were not going to go for it. We were trying to draw them offside,” Kitchens said.

Then why waste a timeout rather than take a delay-of-game penalty at that part of the field?

“We had a situation where we were going to go for it if they had lined up in a certain look,” Kitchens said. “I did not want any confusion to be made. I just wanted to get everything back under control at that point. It was better, given the potential disaster of the outcome.”

Receiver Odell Beckham Jr.’s 15-yard taunting penalty after a 22-yard catch helped short-circuit the aforementioned drive. He put his hand under his chin and waved while on the Ravens sideline.

“We have to continue to try to play with our composure,” Kitchens said. “I know Odell has done that before and nothing has been called. I don’t know.

“That is (the officials’) decision to make. I know that we need to eliminate all room for error. We allow them the possibility of throwing a flag whenever we do things like that, and I think Odell has learned from that.”

The Browns haven’t used the no-huddle attack often despite the offense being stagnant much of the season.

“We develop a plan every week to try to give us the best chance to win. It is always the potential to have it in,” Kitchens said. “It goes down to execution from the standpoint of whether you are in the huddle or not in the huddle. We did a good job on our no-huddle offense yesterday. In hindsight, maybe I should have used a little bit more of it.”

** Defensive tackle Brandin Bryant was signed back to the practice squad. He was waived Saturday to clear a roster spot for defensive end Robert McCray.

Notes: Sheldon Richardson upset he was taken out of game by Freddie Kitchens after “protecting a teammate”
Notes: Odell Beckham Jr. misses practice with illness, listed as questionable for season finale vs. Bengals