Bryan Cox’s football career got going at Avon High School, and his motor hasn’t stopped since 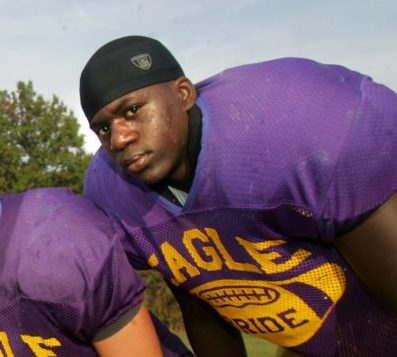 Defensive end Bryan Cox stepped into a tough spot when the Browns signed him Nov. 13.

Myles Garrett would get suspended for the rest of the season the next day and Olivier Vernon, the other starter, was out with a knee injury. So Cox immediately got important playing time as the Browns needed every win in an unsuccessful attempt to make the playoffs.

He quickly made an impression on his new coaches and teammates.

“Bryan has a tremendous motor,” coach Freddie Kitchens said. “He has never seen a play that he wanted to take off.”

“I feel like that’s the only way to play the game. Just play hard every play,” he said. “I’ve always been like that. It might just be in my blood, honestly.”

Cox, 25, is the son of former NFL linebacker Bryan Cox, who was a three-time Pro Bowler in a 12-year career. The elder Cox coached the Browns defensive line in 2009-10 under Eric Mangini, which brought the younger Cox to Northeast Ohio.

Cox enrolled at Avon High School and played as a sophomore on the junior varsity and as a junior on the varsity.

“His work ethic took off,” Avon coach Mike Elder said Monday. “He worked harder than anybody. He developed that motor.”

Elder watched the teenager develop from an undisciplined pile of potential to a strong, tough defender with a nasty streak — just in time for him to take his tremendous talent to St. Thomas Aquinas High School in Fort Lauderdale, Fla., where he played on the same defensive line as Joey Bosa, the No. 3 pick of the Chargers in 2016 out of Ohio State.

Cox, who already had about 20 Division I offers while at Avon, came into his own, signed with the University of Florida and totaled 10 sacks in four years. He was undrafted in 2017, signed with the Panthers and played 19 games over three seasons until getting waived Nov. 8.

“He’s the only player at Avon to ever play in the NFL,” Elder said. “He wasn’t one of the greatest in Avon history but he was getting there. You knew his dominating year was going to be his senior year.

Cox has fond memories of his time at Avon and keeps in touch with Elder and some friends. Elder’s been to two of Cox’s games with the Browns and hopes to get together for dinner.

“I had a good time at Avon, just playing ball there, made it to the playoffs my second year. It was a cool experience,” Cox said, before discussing Elder. “He’s a real good person, good mentor, just good all-around guy.”

Elder remembers watching him play on ESPN for St. Thomas and chase down a ball carrier at the 2-yard line.

“I’m proud of him,” Elder said. “I get excited every time he shows up on film.”

Cox has played five games with the Browns, starting the last two. He has 10 tackles, a half-sack and had two hits on Ravens quarterback Lamar Jackson on Sunday.

“His name is his name. He’s just like his father, definitely can rush off that edge and tough-nosed, hard, grind-it-out type of player,” defensive tackle Sheldon Richardson said.

It’s part of life in the NFL, but joining a team at midseason and trying to make an impact is difficult.

“It’s not easy. Having a little bit of background on the defense before made it a little bit more of a smooth transition, but anytime you come in in a new environment, new system it’s kind of a little bit of a challenge but you’ve just got to find a way,” Cox said.

The familiarity came from playing for defensive coordinator Steve Wilks with the Panthers in 2017.

“Bryan plays with, No. 1, a tremendous motor, extreme effort,” Wilks said. “He is a guy that is going to give you an opportunity and chance to make plays out there just because he plays so hard. He plays within the system. He does a lot of good things, and he is being disciplined and trying to do his job.”

Cox describes his game as “pretty balanced” between pass rush and run defense and said he’s working on the nuances in his pass rush moves to get to the quarterback more frequently.

“He shows you he’s a pro,” middle linebacker Joe Schobert said. “He’s been here a very, very short time and he’s been productive in games when he’s been in there. And he’s been reliable for us, doing what he’s supposed to do.”

Cox has a chance to stick with the Browns. The defensive line that was supposed to be a strength of the team has been in transition throughout the last couple of months, so general manager John Dorsey will have to consider a variety of options in the offseason.

Cox would like a future where his football career was launched a decade ago.

“Certainly. It just all depends on what they feel about me,” Cox said. “That’s not my decision to make. All I can do is go play.”

Embattled coach Freddie Kitchens could really use win over red-hot Ravens
Motivated to never miss a game, Baker Mayfield set to become 1st Browns QB to start all 16 since Tim Couch in 2001