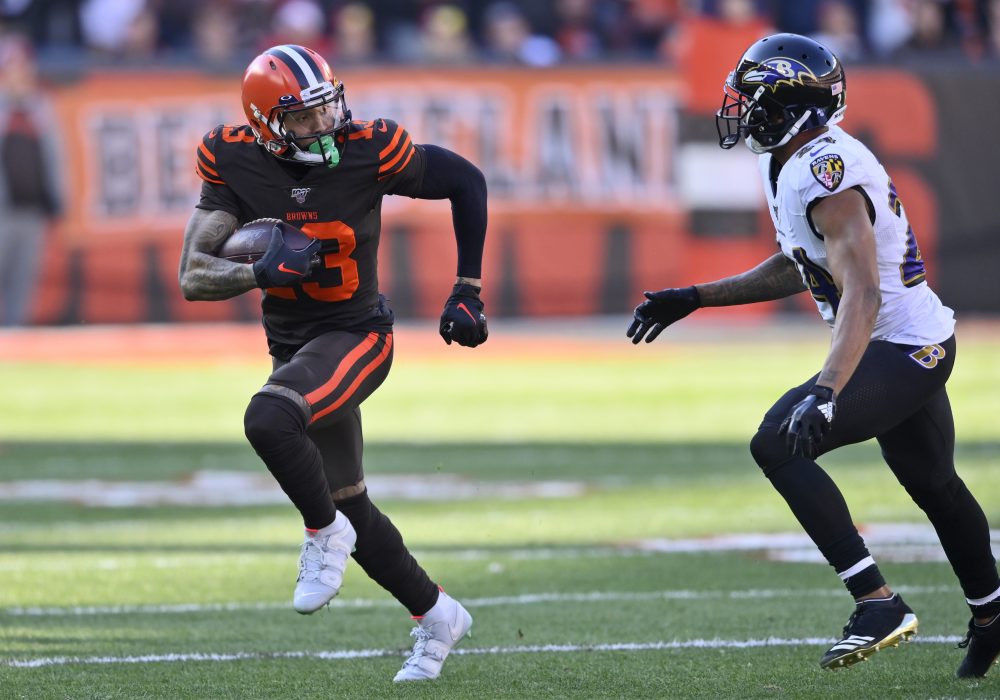 BEREA — Receiver Odell Beckham Jr. fought through a sports hernia for 15 games, so it seems unlikely he’d miss the finale — and a chance to reach 1,000 yards receiving — because of an illness.

But Beckham didn’t practice Friday and was listed as questionable on the official injury report for the game Sunday against the Bengals in Cincinnati.

“You never know how sick you are,” left guard Joel Bitonio said. “I’ve been sick where you can’t move before and that’s tough to do. You’re traveling down there, it’s tough.

“But he’s really toughed it out this year. I know he’s been banged up and we’ll see. We’ve got 48 hours or so before kickoff so we’ll see what he can do and see if he can get healthy.”

Kitchens said Beckham went to see a doctor and was expected back at the team facility. He didn’t know the severity of the illness.

“All I know is he was not able to go today so I can only deal with today,” Kitchens said.

Tight end Ricky Seals-Jones got sick early in the week and missed practiced Wednesday and Thursday before returning Friday. Tight end Pharaoh Brown missed Friday with an illness. They were also listed as questionable.

“I don’t know if it is the flu or not,” Kitchens said. “I know some of them are getting tested right now to see, but we will see how it goes at the end of the week.”

Beckham is 46 receiving yards shy of 1,000. He would become only the 10th player in NFL history with 1,000 yards in five of his first six seasons.

Beckham has started all 15 games and played 95.6 percent of the snaps despite the sports hernia. He has 71 catches for 954 yards, a 13.4 average and three touchdowns.

GOOD TO BE HOME

Running back Kareem Hunt is scheduled to be a restricted free agent after the season after signing a one-year deal with the Browns. He’d like a long-term deal to stay.

“Ain’t no place like home, and this is home for me, so I would love to be in my hometown playing for a long time, maybe finish my career,” he said. “That would be something special. You never know. I’m just excited to do whatever it takes. They’re going to get a ballplayer.”

He has big dreams.

“I would love to be home in Cleveland and trying to fight to bring home a Super Bowl,” he said.

Browns general manager John Dorsey drafted Hunt in the third round in 2017 while holding the same role with the Chiefs. Dorsey opened himself to criticism by signing Hunt in February.

“Me and John are very close and I’m sure he does want to bring me back,” Hunt said. “I’m not really sure what’s going to happen. But we’ll see.”

Hunt, who spent his early years in Elyria and went to Willoughby South High School, resumed his career and began to rehabilitate his image after being cut by the Chiefs last season and serving an eight-game suspension to start this season for two off-field incidents, including shoving and kicking a woman.

In seven games he has 41 rushes for 167 yards and two touchdowns and 34 catches for 253 yards and a touchdown. He’s looking forward to playing a full season.

“I can’t wait for it. I’ll be happy to be part of every game,” he said. “I feel like I’m a difference-maker on the field. I feel like I could’ve helped win a couple more games.”

Rashard Higgins opened the season as the No. 3 receiver but has only four catches for 55 yards and a touchdown — the winner vs. the Bills. He’s gone six straight games without a catch despite being active and healthy. He hasn’t played on offense in the last three games.

He was asked how he’s dealing with the disappointment.

“Still not over it,” he said. “Still a lot that I think about at nighttime. But it is what it is.”

He said the worst part is not getting a chance to prove himself, and that he hasn’t received an explanation from Kitchens for the inactivity. He’s been passed on the depth chart by Damion Ratley and KhaDarel Hodge.

He acknowledged there is a weird feeling because this could be his final week with the Browns after four seasons.

Richardson and Tretter are expected to play, and Kitchens said there’s “definitely a chance” Vernon could play despite missing six of the last seven games.

** Richardson said he was fined $42,115 for roughing the passer against the Ravens. He shoved Baltimore’s Lamar Jackson to the ground after he’d thrown a pass. He plans to appeal the fine.