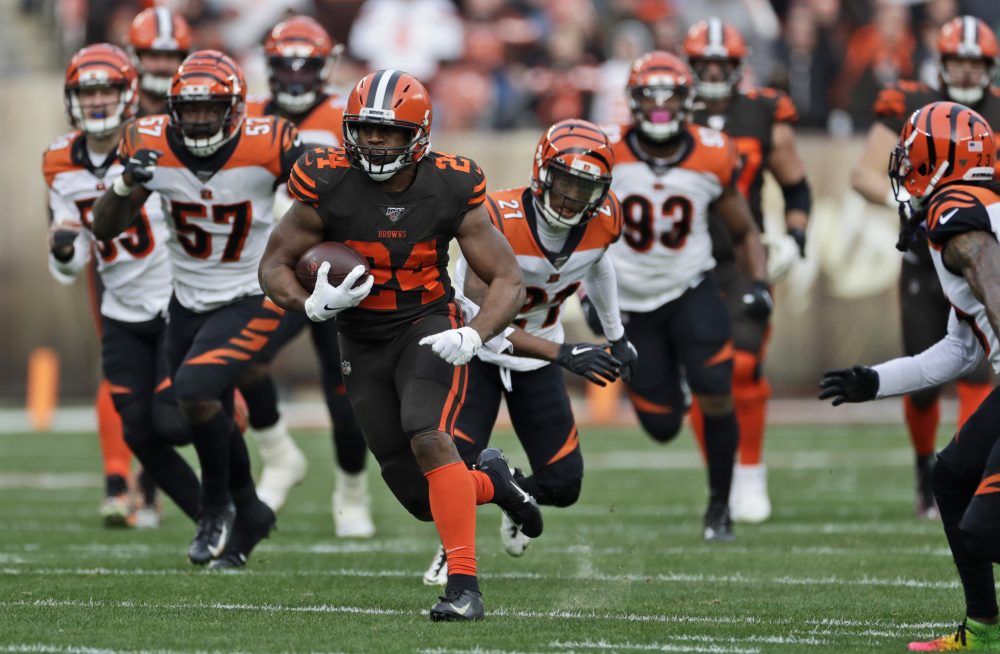 Nick Chubb has 1,453 rushing yards for a 92-yard lead on Carolina’s Christian McCaffrey and a 124-yard lead on Tennessee’s Derrick Henry. That’s a comfortable gap, but either chaser is capable of a 200-yard day, so Chubb needs his eighth 100-yard game of the season to be safe.

It shouldn’t be difficult against a Cincinnati run defense ranked last in the league at 153.9 yards a game. The X-factor is coach and play caller Freddie Kitchens. In the first meeting three weeks ago, Chubb carried the ball only three times in the first half before finishing with 15 carries for 106 yards in the 27-19 win. Kitchens maintained during the week he isn’t focused on getting Chubb the rushing title, or any other individual stats. That’s fine. His goal should be winning. That requires giving Chubb, the team’s best player all year, the ball at least 20 times.

Chubb is the ultimate team-first guy and continued to downplay his desire to win the rushing title. But he did concede: “I care because everyone cares.” He’s right. His teammates want to see Chubb take home the title.

“It means a lot. I don’t know a lot of backs who can say they won a rushing title,” said running back Kareem Hunt, who won one as a rookie with the Chiefs in 2017. “And it’s hard to do. You’ve got to be consistent, you’ve got to come ready to play every game, and Nick deserves it. He’s a workhorse type of guy, a good person and I can’t be happier for him. He deserves the rushing title, no doubt. And I believe he’s going to get it.”

Chubb leads the league with 285 carries and has a 5.1 average and eight rushing touchdowns. His rushing total is fourth in franchise history, the most since Jim Brown’s 1,544 in 1965.

“He is a strong runner,” first-year Bengals coach Zac Taylor said. “You just look at the big play he had against us, he broke several tackles, has good speed and finishes off runs. He has put together a real good year, and he can hurt you in all different ways.”

The Bengals are 1-14 and have locked up the first pick in the draft, which will likely be used on LSU quarterback Joe Burrow. But they can’t be accused of going through the motions at the end of the season.

Not only did the Bengals have a chance to beat the Browns on Dec. 8 in Cleveland — they probably would’ve if not for a 1-for-5 performance in the red zone — they staged a remarkable comeback last week in a 38-35 overtime loss at Miami. The Bengals trailed by 23 points before a touchdown with 6:15 to play. They then scored two touchdowns and two 2-point conversions and recovered an onside kick within the last 30 seconds.

“It shows our character, I think, because it was a really bad game,” Taylor said. “Six minutes left in the game, we were down 23 points, had not really done anything well the entire game and then the energy just changed on the sidelines. Guys started making plays, guys were believing we were going to come back. It says a lot, given the year we’ve had without a lot of success in the win column, to be on the road in Week 16 and for our guys to fight back and get us back into a position where we can go and win the game. It says a lot about the guys we have on this team.”

The Bengals started the season with 11 losses, beat the Jets 22-6 and have lost three in a row.

“They’ve still got fight in them,” defensive tackle Sheldon Richardson said. “We knew that going in, though. If it wasn’t for a few key plays we made for us defensively, we might have lost that game, too.”

Bengals running back Joe Mixon didn’t have to wait long for another shot at the Browns.

“We should’ve won that game, but the best thing about it is we get to see them in three more weeks in Cincinnati,” he said minutes after the first matchup. “They’ve got to come to us. I’m excited and I can’t wait.”

Big talk for a guy on a team with one win, but Mixon was feeling it after carrying 23 times for 146 yards, a 6.3 average and a touchdown. Cincinnati’s offense bogged down in the red zone with a combination of bad play calls and poor execution.

“They did everything that we expected. We just have to capitalize,” Mixon said. “Luckily, we play them in a few weeks and we have to put it together. We have to be ready.”

Mixon has come on strong lately. He has at least 21 carries in three straight games to give him 975 rushing yards on the year. He led the AFC last year with 1,168. Richardson wasn’t offended by Mixon anticipating a rematch.

“It’s football. Promote yourself. It’s OK. It’s life. It goes on. There’s no hard feelings over it for me.”

The Browns have been almost as bad as the Bengals against the run, ranking 30th at 142.4 yards a game. They’ve allowed 643 over the last three games.

“I like that our guys are confident,” Taylor said of Mixon. “That is a step in the right direction and now our preparation has to meet that confidence. You can’t just talk the game. We still have to work all week and put in our preparation to be ready for the looks they will give us.”

Receiver Odell Beckham Jr. has said more than once his season starts at 1,000 yards. Well, he needs to finish strong just to get to the starting line.

Beckham has 954 receiving yards and needs 46 to reach the milestone and join best friend Jarvis Landry (1,092) in giving the Browns a pair of 1,000-yard receivers. A grand is also a big deal for Beckham because he’d become only the 10th player in NFL history with 1,000 yards in five of his first six seasons. The only time he missed was in 2017 when he played four games.

Forty-six yards for one of the league’s best wideouts shouldn’t be a problem against the NFL’s 20th-ranked pass defense, but it’s far from guaranteed. Not only has Beckham had five games this year with fewer than 46 yards — including two catches for 39 yards against the Bengals — he didn’t practice Friday with an illness and was listed as questionable on the official injury report. He made the trip to Cincinnati on Saturday, and it’s hard to believe he’d fight through a sports hernia for 15 games then sit out the finale with an illness, but the human body can be tricky.

“It would be incredible,” Landry said. “The story, he’s been hurt and he went through this whole process the whole year, the trade and to come here and still go for 1,000 yards, dealing with what he’s dealing with, says a lot about him.”

The Bengals will try to win one for the ginger.

Quarterback Andy Dalton could be playing his final game for the Bengals after nine seasons. He’s under contract for another year, but his future is uncertain, especially if the Bengals pick Burrow. People in Cincinnati are preparing for this to be Dalton’s goodbye game.

“Who knows?” Dalton said. “I could be standing right here talking to you in April. I’m under contract, so I don’t know what they’re going to be thinking. We’ll figure all of this stuff out once the season is over.”

Taylor wouldn’t address the possibility, but he benched Dalton at midseason to get a look at Ryan Finley. The rookie was bad, so Taylor went back to Dalton for the final five games. He’s completed 59.6 percent for 3,304 yards, 15 touchdowns, 13 interceptions and a 78.5 rating.

Dalton never won a playoff game with the Bengals but he’s the franchise leader with 203 passing touchdowns, 2,741 completions, 28 300-yard games and an 87.6 passer rating.

“I respect him to the fullest,” Richardson said. “Veteran quarterback, savvy, knows his offense, just doesn’t have his weapons he’s used to throwing to with A.J. Green being out.”

Years since the Browns won at least seven games in consecutive seasons. They went 7-8-1 last year and would go 7-9 with a win vs. the Bengals.

Times the Browns have won four games in the AFC North in a season. They would go 4-2 with a win over the Bengals.