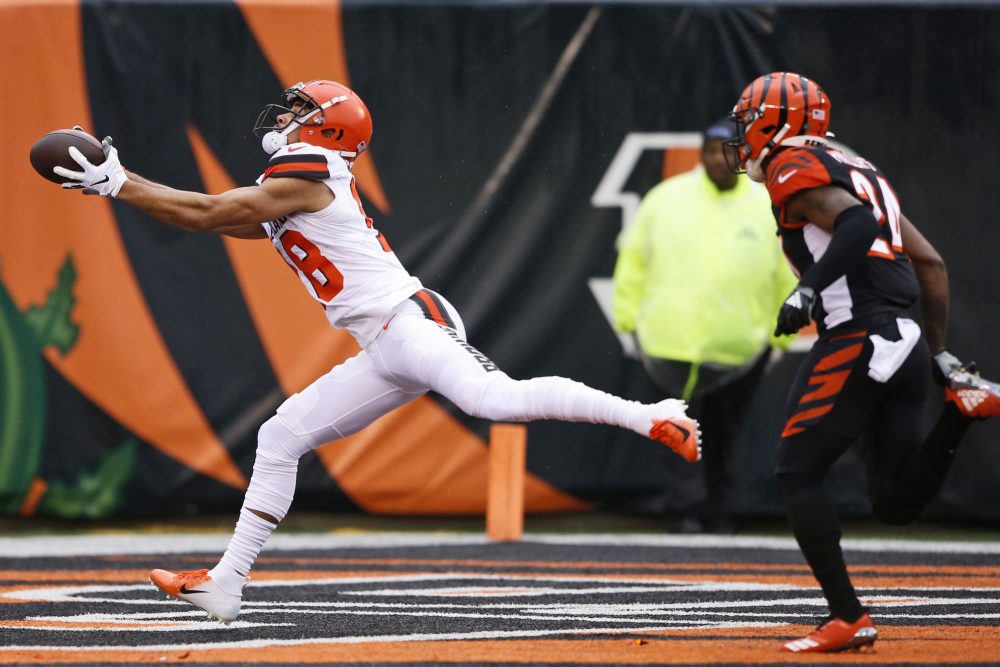 CINCINNATI — The Freddie Kitchens watch is officially on.

The Browns lost the season finale Sunday, 33-23 to the Bengals at Paul Brown Stadium.

In an otherwise meaningless game, the performance and result could play a factor in the decision whether to keep Kitchens for a second season as head coach. If he was coaching for his job, as had been speculated, he’s in even more trouble than when the day started.

The questions for at least the next 24 hours will be about Kitchens’ future.

The mistakes from the previous 15 games were present again in the finale.

Kitchens’ play calling was questionable, confusion caused two timeouts to be taken on offense and one on defense and second-year quarterback Baker Mayfield was inconsistent. The defense also gave up a 3-yard rushing touchdown with 10 men on the field.

Kitchens looked overmatched at times throughout the season, and the talented roster underachieved. A loss to the worst team in the league could be too much for owners Dee and Jimmy Haslam to accept, despite their desire for stability and continuity.

They’ve already fired four coaches since taking over in 2012. A decision could come down Sunday night.

The Browns again couldn’t stop the run, allowing Joe Mixon to rush for 162 yards, 6.2 a carry and two touchdowns.

Mayfield had an up-and-down day.

He threw touchdown passes of 46 yards to Damion Ratley (the first of his two-year career), 56 yards to Jarvis Landry and 20 to Odell Beckham Jr. He also went 12-for-27 for 279 yards, threw three interceptions and was sacked six times.

He threw 21 interceptions for the season.

Beckham caught three passes for 81 yards to eclipse 1,000 for the season. He’s only the 10th player in NFL history with five 1,000-yard seasons in his first six years.

Running back Nick Chubb rushed for 41 yards on 13 carries against the league’s worst run defense, giving him 1,494 yards for the season. He leads the league heading into the afternoon games, where Tennessee’s Derrick Henry needs 166 to pass him.

The Bengals took control after Mayfield’s touchdown to Ratley on the third play of the game.

The Bengals got a 15-yard touchdown pass from Andy Dalton to C.J. Uzomah as the Browns let a tight end run down the seam for a touchdown for the second straight week. The score was set up by a 41-yard Mixon run in which cornerback Greedy Williams and free safety Damarious Randall missed tackles.

The drive was 3 yards after cornerback Darius Phillips intercepted Mayfield and returned it 28 yards. Landry fell down on the route but was well-covered regardless.

Phillips got his second pick in the third quarter on a desperation deep ball in which Beckham stopped running.

Dalton made it 20-7 with 10:06 left in the first half with a 5-yard scramble on third down. The Browns gave up four straight third-down conversions to allow the back-to-back touchdowns.

Cleveland clawed back with a 42-yard field goal from Austin Seibert. Beckham’s 36-yard catch on a go route down the right sideline gave him 990 on the season and put the Browns in field-goal range. Mayfield was sacked on third down when defensive end Carl Lawson was unblocked.

The Browns made it 20-16 with a 56-yard touchdown from Mayfield to Landry with 1:52 left. Landry beat cornerback B.W. Webb down the left seam, caught the ball at the 15-yard line and survived a collision with Webb and safety Shawn Williams to reach the end zone.

Mayfield’s 20-yard jump ball touchdown to Beckham on fourth-and-goal pulled the Browns within 30-23 with 7:16 left. But the defense allowed a drive to set up a 46-yard Randy Bullock field goal for the a final margin.

Mayfield threw his third interception on the final drive.

Odell Beckham Jr. active for finale vs. Bengals; Rashard Higgins’ lost season ends as a healthy scratch
Freddie Kitchens holding out hope he survives 6-10 season: I’m going to show up tomorrow and do my job