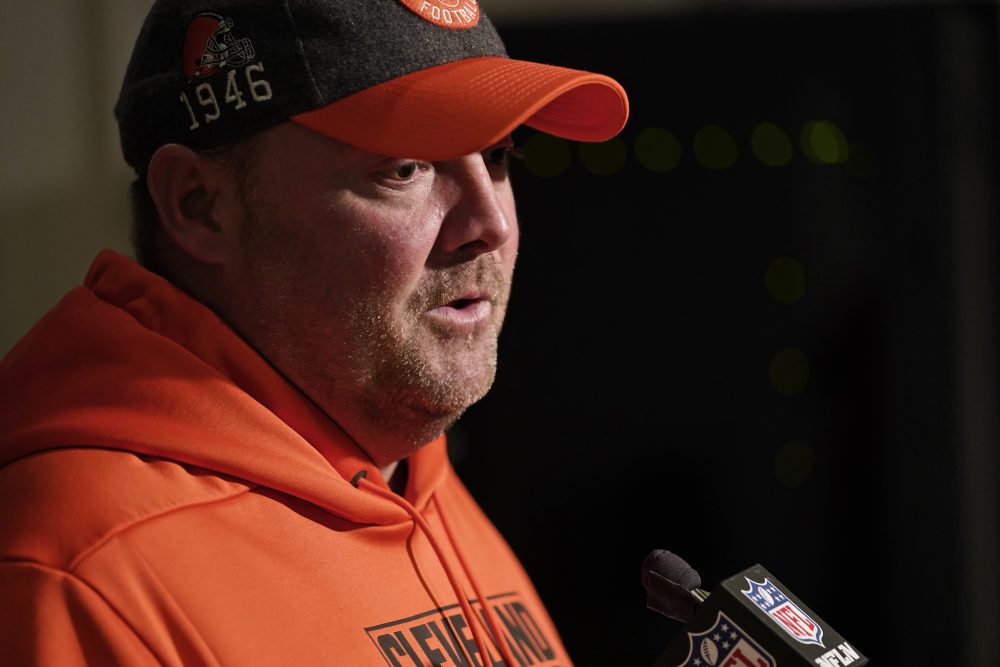 He was fired by the Browns on Sunday night, giving up his wardrobe of brown and orange after going 6-10 in his lone season as head coach.

His final act was a 33-23 loss to the Bengals hours earlier, giving Cincinnati its second win of the season.

Kitchens ingratiated himself to Browns fans at his introductory news conference Jan. 14 with his southern charm and famous quote. He had been hired five days earlier.

“If you don’t wear brown and orange, you don’t matter,” Kitchens said.

The honeymoon lasted until the opener, a 43-13 home loss to the Tennessee Titans. The criticism of Kitchens continued to mount throughout the season that started with huge expectations and ended with the franchise’s NFL-high 17th straight season without a playoff appearance.

So owners Dee and Jimmy Haslam are searching for a coach yet again. They bought the team in 2012 and have fired five coaches — Pat Shurmur, Rob Chudzinski, Mike Pettine, Hue Jackson and Kitchens.

The next hire will be the 18th full-time coach in franchise history.

“We thank Freddie for his hard work and commitment to this organization but did not see the success or opportunities for improvement to move forward with him as our head coach,” the Haslams said in a statement. “Our focus is on hiring an exceptional leader for this football team and we will take a comprehensive approach to this process. We are excited about the core players we have to build around and develop and we look forward to bringing in a strong head coach that will put this group of players in the best position to succeed.”

The Haslams have been desperate for stability and continuity but decided they couldn’t afford to give Kitchens a second year.

He was given the job after an exciting eight-game stretch as offensive coordinator and play caller to end 2018. It was the first time he’d held either role, but the offense picked up steam and quarterback Baker Mayfield set the NFL rookie record with 27 touchdown passes.

In his first time as a head coach at any level, Kitchens struggled as a play caller, game manager and disciplinarian, and Mayfield regressed in his second season, throwing three interceptions Sunday to give him 21 on the year.

Despite adding receiver Odell Beckham Jr. for the whole season and running back Kareem Hunt for the second half, the Browns couldn’t match the production of last season. They averaged just 20.9 points a game.

They also fell short of last season’s record of 7-8-1.

“I would like to thank Freddie for his dedication and efforts this past season,” general manager John Dorsey said. “We are disappointed in our results and feel a change is necessary. Freddie is a good man and good football coach. We wish he and his family nothing but success.”

Dorsey led the search that landed Kitchens, so it’ll be interesting to see if he keeps as much power this time. Chief strategy officer Paul DePodesta could have greater influence after the Kitchens flop.

Kitchens joined the Browns in January 2018 as associate head coach/running backs coach. He was promoted to offensive coordinator Oct. 29, 2018, after Jackson and coordinator Todd Haley were fired at midseason.

He completed the unlikely rise up the organizational chart when he was hired as coach Jan. 9, beating out finalist Kevin Stefanski, the Vikings offensive coordinator.

Mayfield said the Browns weren’t as prepared as they should’ve been for the offseason program, then the Browns committed 18 penalties in the opening blowout loss to the Titans. Discipline was an issue all year, as he benched tight end David Njoku, receiver Rashard Higgins and defensive tackle Sheldon Richardson at different points. Njoku and receiver Jarvis Landry also yelled at Kitchens on the sideline.

He refused to give up play calling to experienced coordinator Todd Monken but never figured out how to effectively incorporate Beckham. He also neglected the running game at key moments, despite having Nick Chubb, who finished second in the league with 1,494 rushing yards.

The worst of it were bad losses that eliminated the Browns from playoff contention. They lost to Broncos backup quarterback Brandon Allen and Steelers backup rookie quarterback Devlin “Duck” Hodges, then laid an egg against the Cardinals on Dec. 15 with the playoffs still in reach.

Kitchens promised to learn from his mistakes after the game Sunday but didn’t show he could during the season. He bungled the end of the first half in a loss to the Seahawks on Oct. 13, saying he wanted to score twice in the final 96 seconds. Then in a Week 16 loss to the Ravens he mismanaged the clock so badly the Ravens scored two touchdowns in 69 seconds while being out of timeouts.

His decisions off the field were also questionable. He wore a “Pittsburgh started it.” T-shirt in public that referenced the brawl that got defensive end Myles Garrett suspended for the final six games. To make it worse, Kitchens said he’d wear it again.

“I just do my job,” Kitchens said Sunday. “Sometimes it was good enough, sometimes it wasn’t but I’ll learn from my mistakes and that’s the only thing, and I feel like they know that.”

The players were prepared for the firing and didn’t protest when asked in the final weeks and again after the finale.

“It’s not my call,” Mayfield said. “I know how I’m going to handle the offseason with whatever pieces we have come back, and get those guys ready, and attack it. It’s going to be a long ride, but a fun one. I can’t wait to get after it.”
“I don’t know and that’s not my job or not my call,” Landry said. “We’ll see what ownership does, but 6-10 definitely is not acceptable.”

Kitchens hugged his players on the sideline, embraced Bengals first-year coach Zac Taylor at midfield and then held out hope.

“I haven’t been told anything different — they expect me to do my job and I’m going to show up tomorrow and do my job,” Kitchens said in the minutes following the loss.

The Browns had been eliminated from the playoff chase the previous week with a loss to the Ravens, but the finale vs. the Bengals was a chance to avoid double-digit losses and finish with back-to-back seasons of at least seven wins for the first time since 2002. It was also considered by some a chance for Kitchens to make a final on-field argument to keep the job.

He said the effort was good, but the defense couldn’t stop running back Joe Mixon (162 yards, 6.2 a carry, two touchdowns) and Mayfield threw three interceptions to offset three long touchdowns.

“Our guys played their a– off. They kept fighting,” Kitchens said.

But it was another loss, and the mistakes from the previous 15 games showed up again.

“There were a lot of firsts. I’m not making any excuses at all, but I think I learned during the course of the year so I can be a better version of myself moving forward,” he said.

The opportunity won’t come in Cleveland.

Freddie Kitchens holding out hope he survives 6-10 season: I’m going to show up tomorrow and do my job
As search gets off to fast start, players want leadership in next coach, someone who can get most out of talented roster