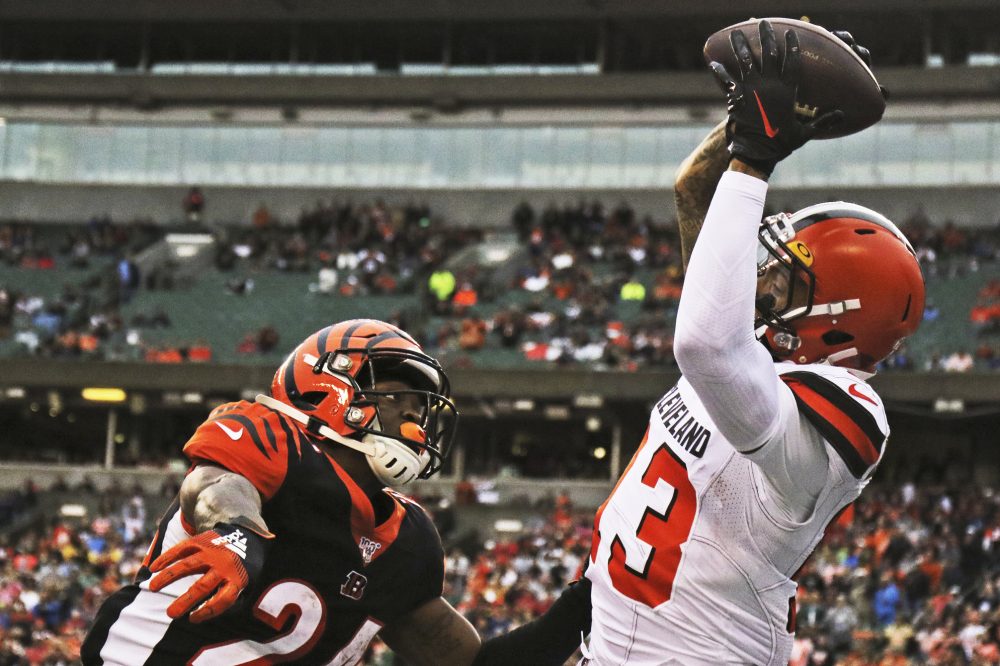 CINCINNATI — Odell Beckham Jr. spent the final game of his first season with the Browns vomiting on the sideline, using the restroom at halftime and getting an IV.

Beckham persevered through the food poisoning Sunday to reach 1,000 receiving yards and make a spectacular touchdown catch, but the difficulties and the 33-23 loss to the Bengals exemplified Beckham’s year.

“I’m just weak right now, my body’s weak, I had to get another IV, so y’all might want to back up a little bit,” said Beckham, who missed practice Friday.

Beckham caught three passes for 81 yards, including a leaping 20-yard touchdown in the fourth quarter to pull the Browns within 30-23 with 7:16 remaining. He finished the year with 74 catches for 1,035 yards and four touchdowns.


He and best friend Jarvis Landry are the first pair of Browns receivers to reach 1,000 yards in the same season. Receiver Braylon Edwards and tight end Kellen Winslow II are the only other pair to accomplish the feat, in 2007.

“I came today to accomplish that with Jarvis,” Beckham said. “I know how much it meant to both of us.

“I told my mom, I don’t know where my body’s at, but I know I’ve got enough heart to go out there and get it done. I just thank God I was able to get it done.”

Beckham joined the Browns in a trade from the Giants in March. He took awhile to get used to the huge change, was slowed by a sports hernia suffered in training camp — he estimated he played the season at 80 percent — and frustrated by his role and lack of production.

After multiple reports in the last month that he wanted to play elsewhere next year, he committed to returning. He doubled down Sunday.

“Jarvis and I talk about how big our plans are for 2020 and I can’t wait,” he said. “I think this is the start of the best shape I’ll ever be in to do that for the rest of my career. I’m going to win in this offseason. 2019 has been a year of the losses and all these things and I feel like I’ve taken ’em with great humility and just learned a lot about myself.

“Just positive looking into 2020 like I’m excited. I’m excited for whoever I face, I’m excited every time we line up and I’m going to give you every single bit of what I can each and every play. It’s not a threat or a promise or try and scare anybody, it’s real. This is going to be the best me in 2020.”

He said he’ll meet with a doctor and determine if surgery is necessary to repair the sports hernia, but he’d like to avoid it if possible.

“The season’s been a disappointment,” Beckham said. “I feel like week to week it’s been a battle to get to Sundays. I can’t wait for 2020. I’m done with making excuses for what happened and how I really was going through whatever.”

Beckham became just the 10th player in NFL history with five 1,000-yard seasons in his first six years. The only year he missed was 2017 when he broke an ankle and played four games.

Excluding that season, his catches, yards and touchdowns this season are the lowest of his career. He and quarterback Baker Mayfield struggled to develop timing and chemistry.

“For him to fight through his illness — he was throwing up on the sideline — I’m not sure if the TV caught that,” Mayfield said. “That’s a guy who’s very misunderstood on the outside. I’m happy to have him here in our locker room, so our relationship is going to continue to grow. That’s the good part about it.”

The work in progress was evident on Mayfield’s second interception and Beckham’s touchdown.

Midway through the third quarter, Mayfield threw deep in Beckham’s direction on third-and-16 from the Cleveland 19-yard line but Beckham stopped and cornerback Darius Phillips got his second pick of the day. On fourth-and-goal from the 20 midway through the fourth quarter, Mayfield bought time and threw a jump ball into the right corner of the end zone, where Beckham outjumped Phillips for the touchdown.

“He’s been doing it all year. Everything comes with opportunity and being able to make plays,” Landry said. “I think he’s a guy that, for us, we want to try and get the ball and I don’t know if we knew quite how to do that effectively, but we found ways in games when we needed it and he kept his head and he managed to stay a part of it throughout the year, which shows tremendous resilience on his part, just the competitor he is.”

Beckham said his commitment to Cleveland won’t change no matter who’s coaching the team next season.

“I don’t know what’s going to happen or anything like that, but I’ll be here, so whatever decisions they make is what they make,” he said. “Life is about changes and things that happen, so we’ll see. Only time will tell.”

Joel Bitonio says changes necessary after disappointing season, it’s “put up or shut up” time for organization
Commentary: Browns look predictably clueless as they wander through coaching search without a pick