As search gets off to fast start, players want leadership in next coach, someone who can get most out of talented roster 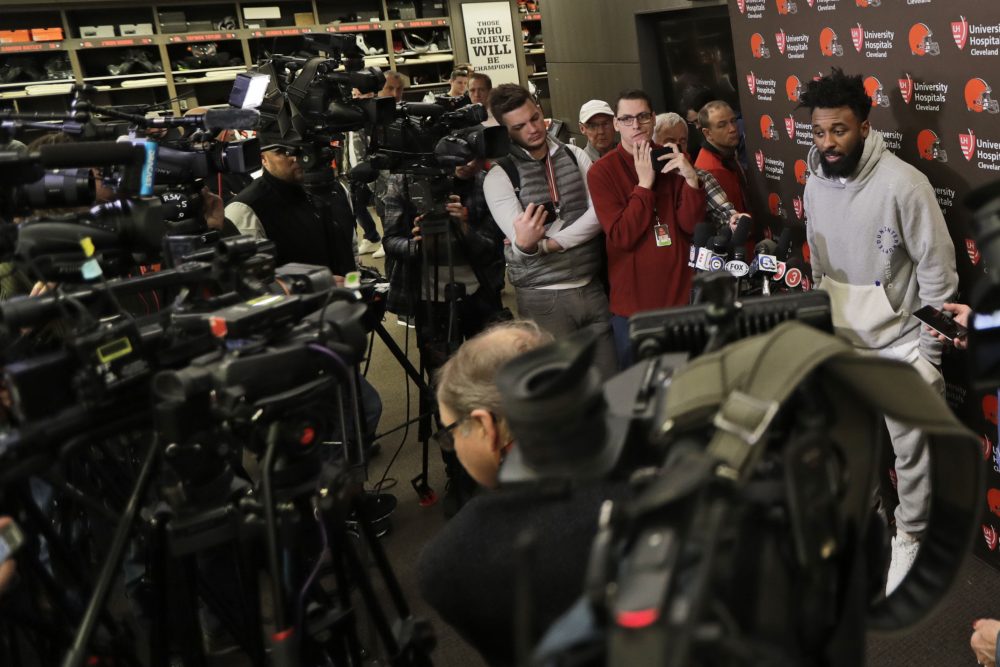 BEREA — Life goes on in the NFL. And it moves fast.

The Browns were full speed ahead on their latest coaching search Monday, less than 24 hours after the season ended with a 33-23 loss to the Bengals and coach Freddie Kitchens was fired after going 6-10 in his lone season. The front office built a candidate list and started to line up interviews.

They’re also interested in former Packers coach Mike McCarthy, with others expected to be added to the list.


After a morning team meeting, the players cleaned out their lockers and collected autographs from teammates. In discussions with reporters, the conversation focused on what went wrong in a season that didn’t come close to meeting the great expectations and what can be done to reach the team’s potential next season.

“This may have been the most talent you’ve seen in one room for this amount of time and we still have more time,” receiver Jarvis Landry said. “You don’t want to lose that. You want to take advantage of that when you have it.”

He said finding the right coach is a start and he trusts owners Dee and Jimmy Haslam and general manager John Dorsey to get that done. Landry was strong when asked what’s needed most in the next coach.

“Just leadership,” he said. “I just think that we lacked it at times.”

“They have to have a strong plan and a strong belief in themselves because that carries down,” Bitonio said. “They have to be good in front of the team, good in front of people and a motivator of men. If you can have a coach that can bring all that together and put the best team on the field, I think that’s a good way to start.”

The Haslams haven’t commented outside of their statement Sunday night. Dorsey is scheduled to meet with the media Tuesday.

The coaching search is shaping up to be pivotal in Dorsey’s future with the organization. The new coach is expected to have input on whether Dorsey stays, ESPN reported.

Dorsey, who was hired in December 2017, led the coaching search last year. His role has diminished, with ownership expected to assume more control and chief strategy officer Paul DePodesta in line to have greater influence.

While the Haslams determined Dorsey got the Kitchens hire way wrong, he also built a roster the players believe in.

“We definitely had the capabilities, have the capability of being a great team,” Landry said. “And we know our potential and one of the things throughout the year that I spoke to you guys about is just trying to find a way to tap into it constantly. We just didn’t do it enough.

“Pretty much everybody that you see in the locker room has a chance to return and be a part of this with the experience of the last two years, what we’ve been through, to be able to push us into the playoffs and to ultimately our end goal, which is the Super Bowl.”

The offense, with Kitchens as the play caller, failed to fully utilize all the weapons. Despite Nick Chubb rushing for 1,494 yards and Landry and Odell Beckham Jr. both eclipsing 1,000 yards receiving, the Browns were 22nd with 20.9 points a game.

“We relied on plays and not players as much,” Landry said. “There’s just opportunities in games where I know on the outside that we could’ve taken advantage of teams’ weaknesses, and that we didn’t. We just didn’t really know what the plan was, or what we were trying to do or I don’t think we ever really found our identity.”

Landry felt a leadership void that went beyond Kitchens.

“Leadership comes from a lot of different places,” he said. “I would say respecting our opponent, respecting the guys that we play with and coach next to are some things that never should lose its value that maybe have.”

Kitchens was the fourth first-time head coach hired by the Browns since 2011, with Hue Jackson the exception. After the Kitchens disaster, experience could move up the list of desired qualities.

McCarthy coached the Packers from 2006-18, going to the playoffs nine times and winning the Super Bowl after the 2010 season. McDaniels was fired by the Broncos in 2010 after less than two seasons.

“It does have its weight to it, but at the same time it’s just about finding the right person, the right leader that you need and that’s going to help your team get better,” safety Morgan Burnett said.

“I felt like he was a players coach and you enjoy playing for him.”

“Turnover’s tough, you get comfortable with things, but sometimes it’s OK to be a little bit uncomfortable as a player,” he said.

Despite the constant change, Bitonio said he hasn’t become numb to the firings.

“You have these relationships with these people, you care about people,” he said. “It’s a business, but it’s a people business, too. It’s one of those things where you look at it and put yourself in their shoes and their families and stuff and it’s tough, man, they’re out of a job.”

The Browns have gone 24-71-1 since Bitonio was drafted in the second round in 2014. The losing hasn’t broken his spirit.

“Have we had a winning tradition here? No. We’ve lost since we’ve been back and we have to turn it around, we have to find a way,” he said. “But I think it’s an NFL coaching job and if you get the right people in the right spots, you have a chance to win here.

“There’s nothing cursed about this city or anything like that. You put the right guys on the field, you put the right coaching staff in, you have all the people working for the same goal and you’re going to win games.”