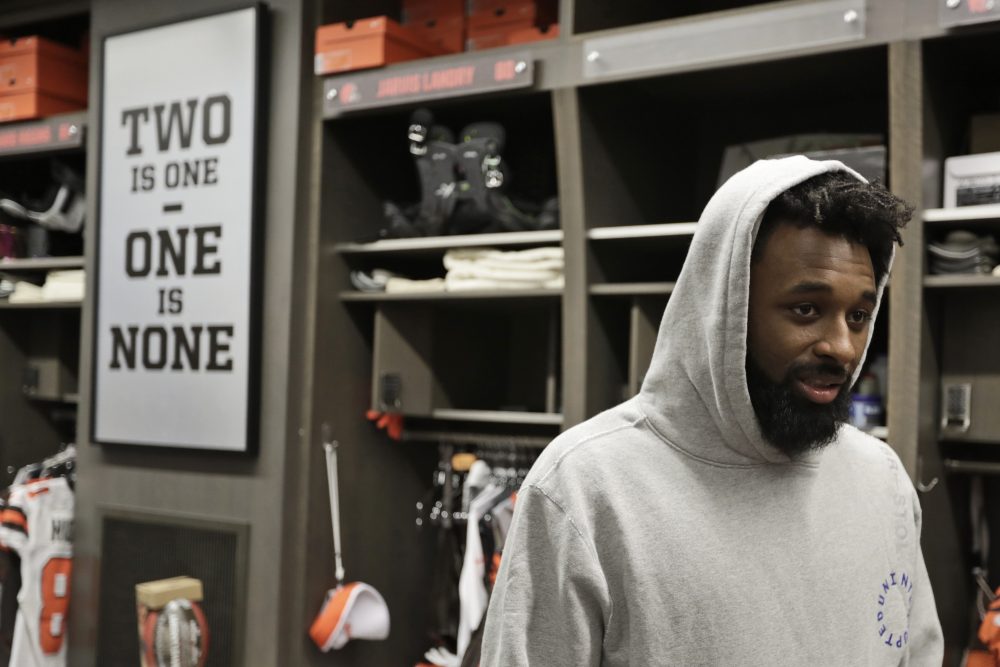 BEREA — Receiver Jarvis Landry will know by the end of the week how he’ll spend the offseason. Training sessions with quarterback Baker Mayfield, or recovering from surgery.

If Landry needs surgery to repair a hip injury that he said includes a fractured sacrum, the rehabilitation would take 6-to-8 months. He called that a last resort and said the hope is the injury can be corrected without surgery.

Landry had an MRI on Monday, and the images were sent to a specialist for review.

“We’re going to find out on Friday,” he said.

Training camp starts in late July and the season in early September. If Landry had surgery in the middle of January, he’d miss all of the offseason, and the start of the season could be in jeopardy.

He said he first felt discomfort during organized team activities in May. He didn’t practice the rest of the offseason, then was limited in training camp.

“It was something we dealt with,” Landry said.

He included receiver Odell Beckham Jr., who played through a sports hernia and will also decide if surgery’s necessary. Beckham caught 74 passes for 1,035 yards and four touchdowns in 16 games.

The potential surgeries haven’t dulled the excitement Landry and Beckham have for 2020.

“The biggest thing now that the offseason is here is getting these injuries behind us, getting fixed, taking care of ’em instead of ripping the Band-Aids and the tape off. Really getting it fixed,” Landry said. “Then from there it’s getting as strong and as better as possible throughout this offseason to make sure that guys aren’t talking to the media like they’re talking to the media after we played ’em this year.”

Landry is already looking forward to seeing a healthy Beckham.

Tight end David Njoku was a healthy scratch for Weeks 15 and 16 then played four snaps Sunday in the 33-23 loss to the Bengals in the finale. He was asked what lies ahead.

“That’s a great question. Positive things,” he said. “I’m going to meet with ownership and (GM John) Dorsey, talk to those guys and just go from there.”

Njoku was benched by coach Freddie Kitchens, who was fired Sunday, and gave a “no comment” when asked if the coaching change helps.

“I understand what you mean, but it’s fresh right now. I’m not really trying to comment on this topic,” Njoku said. “I’m trying to just talk to them, just get away for a little bit and get back to work.”

He was asked if the decision for the recent inactivity extended to Dorsey’s office.

Njoku, the No. 29 pick in 2017 by former head of football operations Sashi Brown, said he “for sure” feels he can have a future with the Browns. He said he loves Cleveland, wants to return and hasn’t lost confidence despite catching only five passes for 41 yards and a touchdown in three games this year. He missed 10 games with a broken wrist.

“My confidence is still up to the ceiling,” he said.

MORE IN THE TANK

Strong safety Morgan Burnett rolled through the locker room with his left knee on a scooter and the lower leg in a boot after his Achilles ruptured Nov. 14 against the Steelers. Burnett, who’ll turn 31 on Jan. 13, plans to play again next season.

“I should be good and ready like right at the start of training camp.”

He signed a two-year, $7.5 million deal April 5 to join the Browns and would like to return for Year 2.

Safety Damarious Randall and nickelback Eric Murray are scheduled to become free agents in March but want to return.

Randall had a disappointing season, missing two games with a concussion, two with a hamstring injury and another because of a coach’s decision. He didn’t have an interception.

“I would love to be back,” Randall said Sunday after the game. “I was here when it started and I want to be here whenever this thing gets going.”

Murray was acquired April 1 in a trade that sent defensive end Emmanuel Ogbah to the Chiefs. Murray had surgery Nov. 1 to repair a lateral meniscus tear suffered while running in practice. He missed seven games before returning for the final two.

“I enjoy the people. I really do like the team. So I wouldn’t mind coming back at all,” he said.

Murray was drafted in the fourth round in 2016 by general manager John Dorsey when he was in the same role with the Chiefs. Murray said that doesn’t mean Dorsey would want to keep him in Cleveland.

“I don’t know. It’s professional football, so people change their mind day and night,” he said. “So I don’t really get any confidence either way.”

The next head coach will reportedly have input on the personnel department. With the uncertainty, vice president of player personnel Alonzo Highsmith may leave for the University of Miami, his alma mater.

Barry Jackson of the Miami Herald reported Highsmith joining the Hurricanes in a chief of staff role has become a “real possibility,” citing sources.

The assistant coaches weren’t fired but were told they could seek other opportunities. If they haven’t moved on, the next coach will decide their fate.