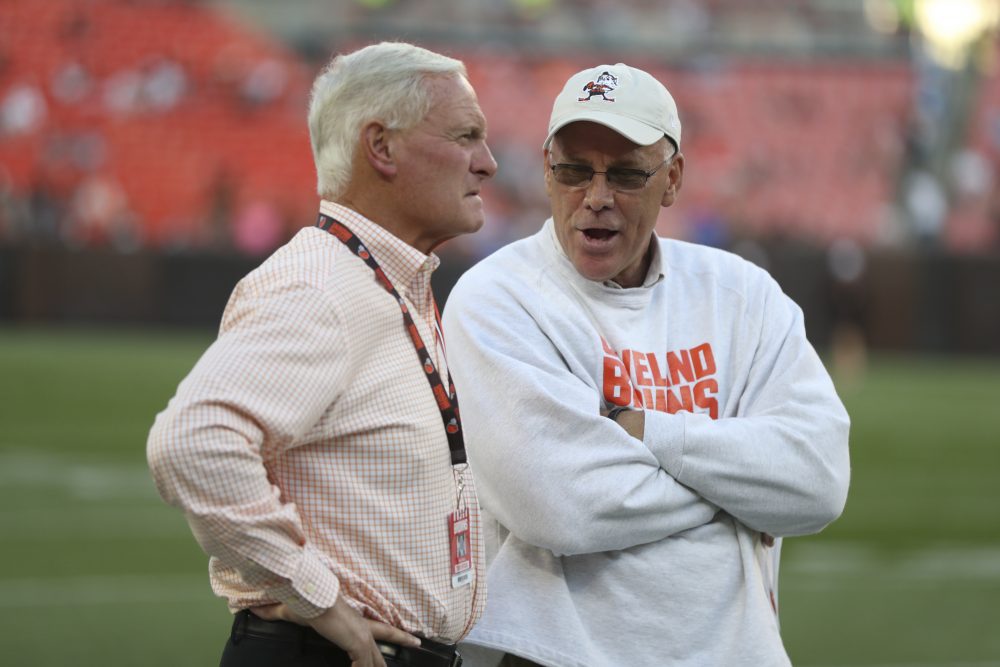 BEREA — Owner Jimmy Haslam cited the talented, young core of the roster, led by quarterback Baker Mayfield, as one of the reasons the Browns coaching job is attractive.

Yet Haslam ousted the man who constructed the roster, general manager John Dorsey, who parted ways with the organization Tuesday after two years. Haslam wanted to reduce Dorsey’s role to strictly a player personnel position and he refused.

“You know, John did a nice job for us in some aspects, OK?” Haslam said Thursday. “I think it’s unfair to him and unfair to the organization to get into exact reasons why we felt like reorganizing the personnel group made sense. So I’ll just leave it at that.”

He did provide some insight later. The news release announcing Dorsey’s departure said the role of general manager in the league “continues to evolve.”

“It’s going from just being a scout to somebody who is assessing players with a variety of whether it be traditional scouting, whether it be using data to help make decisions, which is really what analytics is, to coordinating other key functions in the organization,” Haslam said.

He wouldn’t answer when asked what Dorsey did to provoke the demand for him to accept a smaller role.

“We asked John to take a different position in the organization, I don’t want to get into all the details,” Haslam said. “We felt like it was well-suited to John’s skill set, and when we couldn’t work it out, we agreed to move forward.”

Haslam referred to Dorsey “as good a man as we’ve ever met” but didn’t like him enough to try for some long desired stability.

“Patience and continuity are good as long as you think you have the right people in place and, listen, these are really hard decisions and it’s a tough question to answer because I don’t want to come down unduly harsh on people who have been here in the past,” he said. “I think you all know that is not our style. We just did not feel like we had the right people in place to move forward like we’d like to and, believe me, this kind of change is hard. It’s not something we want to do.”

The ownership group will make the final decisions on the next coach and general manager — Haslam said the coach will be hired first — but chief strategy officer Paul DePodesta is the point person on the search. He’s put together the list of candidates, scheduled the interviews and helped amass the research.

Dorsey ran the search last season, and the Haslams approved his choice of Freddie Kitchens, who was fired Sunday.

“We think Paul is really good at this type of position,” Haslam said. “When you think about it, really all he’s done his whole adult life is gather data to make good decisions, so we think he’s ideally suited to lead this process.”

DePodesta joined the Browns in January 2016 after working for 20 years in Major League Baseball front offices, including as a GM. He’s famous for his role in “Moneyball,” the book and movie about the Oakland A’s use of analytics.

Executive vice president JW Johnson and vice president of football administration Chris Cooper will join Haslam and DePodesta on the search committee. None has a deep background in coaching or a football personnel department.

“Paul is a very smart individual, very strategic, very disciplined in his decision-making process,” Haslam said. “He’s been a good thought partner for us.”

The Browns insist DePodesta won’t take on a larger role in the football department.

“Paul’s job will stay exactly the same as it is now,” Haslam said. “He’s in charge of strategy, reports to ownership, nothing will change. He’ll do everything he can to support the GM and the head coach.”

The Browns are again embracing analytics, which were a driving force under head of football operations Sashi Brown before a reduction under Dorsey.

“All we’re trying to do is take facts,” Haslam said after telling a story about how analytics are used in his truck-stop chain. “If Baker is better out of a certain formation or certain play, we’re going to try to put him in position where he can be successful. That’s all analytics is. It’s using data to help you make better decisions.”

The football and analytics departments clashed during the season, including over how much influence analytics should have in play calling, according to a person familiar with the situation. Haslam was asked if the team got away from using analytics last year.

“There’s a tremendous opportunity for use to do better in that area is all I can say,” he said.

STAND BY YOUR MAN

Mayfield took a step back in his second season, ranking 31st with 21 interceptions, a 78.8 passer rating and 59.4 completion percentage.

“Baker caught a lot of grief this year,” Haslam said. “I think with everything that was put on his plate both in terms of leadership and as a player, his first full year he did a remarkable job.

“We need to do everything we can to help Baker realize his full potential. That’s something all of us in the organization are focused on.”

… BUT NOT THIS ONE

Haslam disputed a notion that he and wife Dee had reservations about hiring Kitchens a year ago after letting Dorsey handle the search.

“No, we didn’t,” Haslam said. “First of all, it’s an organizational decision of who the head coach was.

“These kind of changes are tough. You spend a lot of time with these people and I certainly enjoyed our time with him but we just felt like the team did not make enough progress during the course of the year and decided to move forward.”

Former Browns linebacker Clay Matthews didn’t make the list of 15 finalists for the Pro Football Hall of Fame Class of 2020. He was a semifinalist.

** Running back Nick Chubb is a finalist for the FedEx Ground NFL Player of the Year after finishing second in the league with 1,494 rushing yards. Tennessee’s Derrick Henry, who won the rushing title with 1,540 yards, and Carolina’s Christian McCaffrey, who had 2,392 scrimmage yards, are the other finalists.