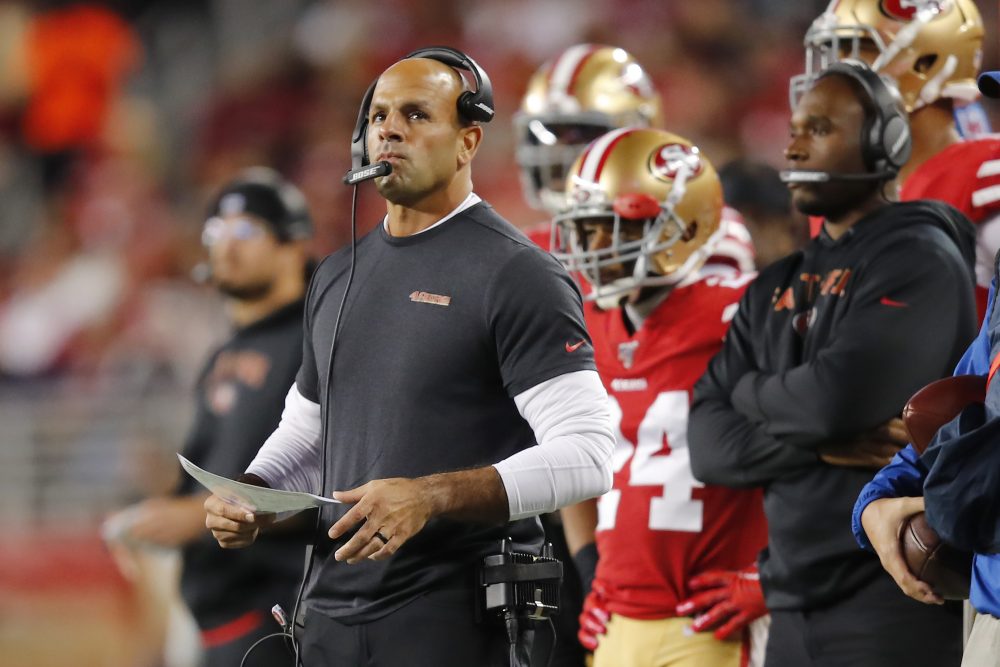 The Browns went on the defensive Saturday as their coaching search continued.

San Francisco 49ers defensive coordinator Robert Saleh interviewed in the Bay Area. He’s the only one of the seven known candidates whose specialty is defense.

The 49ers (13-3) are the No. 1 seed in the NFC playoffs and have a bye this weekend. Saleh, 40, is in his third season as coordinator after being hired by coach Kyle Shanahan.

They were led by a dominant and deep front four that includes rookie Nick Bosa, DeForest Buckner and Arik Armstead. The dominance was on display in a 31-3 Monday night win over the Browns on Oct. 7, as the offensive line and quarterback Baker Mayfield had no chance.

“With a front when it’s as dominant as what our guys have been putting on, as relentless as our front has been … the only way to combat a great QB on defense is with a great pass rush,” Saleh told reporters during the season.

Analysis: With the Haslams’ track record, the Browns’ best chance in latest reboot is getting lucky

Shanahan was offensive coordinator for the Browns in 2014 but argued his way out of town, and his contract, after one season. He was upset with the interference of then-general manager Ray Farmer and the organization’s desire to play quarterback Johnny Manziel despite the team’s success with Brian Hoyer.

Shanahan told reporters he was excited for Saleh to interview with the Browns.

“I don’t think that has anything to do with the people who are there now.” Shanahan said. “I’m pumped for Saleh to get this opportunity. Mr. and Mrs. Haslam are great people and I think they’re great people to work for. We’ll see how the interview goes for him.”

Saleh was linebackers coach for the Jaguars from 2014-16 and has been in the NFL since 2005, also working for the Texans and Seahawks. He was born and raised in Dearborn, Mich., played tight end at Northern Michigan University and is believed to be the first Arab American coordinator in NFL history.

The 49ers ranked 25th and 28th in scoring in Saleh’s first two years and had an NFL-record-low seven takeaways in 2018. Things were vastly different this season, with the Niners getting 27 takeaways to go with the other impressive stats.

Saleh’s energy and enthusiasm on the sideline are popular on social media. He’s a screamer and fist-pumper.

“I have been sent all the memes and everything,” Shanahan said. “It’s what I expect. I mess with him all the time. That’s his style. He has the cleanly shaven head every single day he talks to you guys, very tan, lifts a lot and knows what he’s doing. He enjoys gameday, too. We always mess with him over it, but that’s Saleh.”

Saleh gets so excited during games he said he occasionally blacks out. He preaches extreme violence to his players.

“I think he knows how to coach defense,” Shanahan said. “If you don’t stress extreme violence, it’s tough to play football. He knows what it takes, but he just wears a bracelet on it — it’s not like it’s tatted on his face or anything. He’s a nice guy, but he’s a very good coach who knows how to get the most out of his players.”

McCarthy reportedly interviewed with the Cowboys on Saturday.