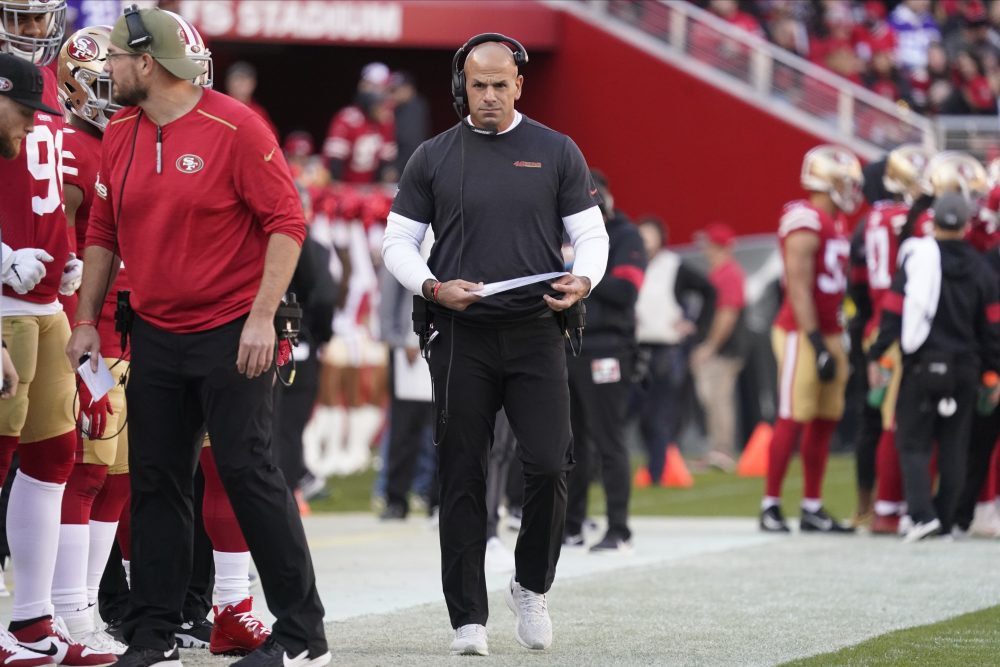 The Browns didn’t hire or interview anyone Saturday.

They debated whom to hire as coach, watched two of the top candidates face off in the playoffs and began requesting interviews for the vacant general manager job.

The eight coaching interviews wrapped up Friday with a seven-hour meeting with Patriots offensive coordinator Josh McDaniels, but no decision was made Saturday. The Browns would like to make a choice Sunday.

Stefanski is now eligible to be hired by the Browns.

The earliest Saleh could be hired is next Sunday if the 49ers lost in the NFC championship. If they won, the move would have to wait until after the Super Bowl on Feb. 2.

If he’s the choice, the Browns would likely reach an agreement without it being official.

Despite the Browns waiting and watching, the Saleh-Stefanski matchup wasn’t expected to influence the decision. That’s a good thing for Stefanski.

The Vikings managed only 147 yards and seven first downs as San Francisco’s front four dominated. The sixth-ranked rushing game was held to 21 yards on 10 attempts and Kirk Cousins was sacked six times.

“He deserves to be a head coach.”

The Browns’ plan is to hire a coach first and give him strong input into the GM decision. While owners Dee and Jimmy Haslam and others debated the coaching decision, they turned their attention to the GM candidates.

Berry is in his first year with the Eagles after three seasons with the Browns as vice president of player personnel. The Harvard graduate was well-liked inside Browns headquarters, including by the Haslams and chief strategy officer Paul DePodesta.

Berry could pair with Stefanski and perhaps Saleh or McDaniels as the Browns try to find a coach-GM combination that will work well together.

Hiring Berry would be a signal that DePodesta will remain and keep his position of influence. DePodesta’s four-year contract is up, and hiring McDaniels could lead to his departure.

Dodds is linked to Saleh, who reportedly really impressed in his interview with the Browns on Jan. 4. Saleh and Dodds worked together from 2011-13 with the Seahawks.

Stefanski could also suggest George Paton, who’s been vice president of player personnel/assistant general manager with the Vikings for 13 years.

Dodds has 16 years of NFL experience, including the last three with the Colts. He spent 10 years with the Seahawks, including the final two as senior personnel executive.

“You’re gonna get one chance to do it,” Dodds told The Athletic in training camp of becoming a GM. “I don’t wanna do it until I’m overprepared … and it’d have to be the right situation.”

Other GM interview requests are possible.

Stefanski, 37, is in his first full year as coordinator and play caller. He was quarterbacks coach last year before being promoted to coordinator with three games left when John DeFilippo was fired.

Saleh, 40, is in his third season as coordinator after being hired by coach Kyle Shanahan.

The Patriots struggled on offense this year under McDaniels, 43, who’s been a coordinator for 12 years. They still finished seventh in points (26.3) and 15th in total offense (354.0).

** The Falcons hired Tosh Lupoi as defensive line coach/run game coordinator. He spent the 2019 season as D-line coach with the Browns.

Earlier in the week, the Falcons hired secondary coach Joe Whitt away from the Browns.