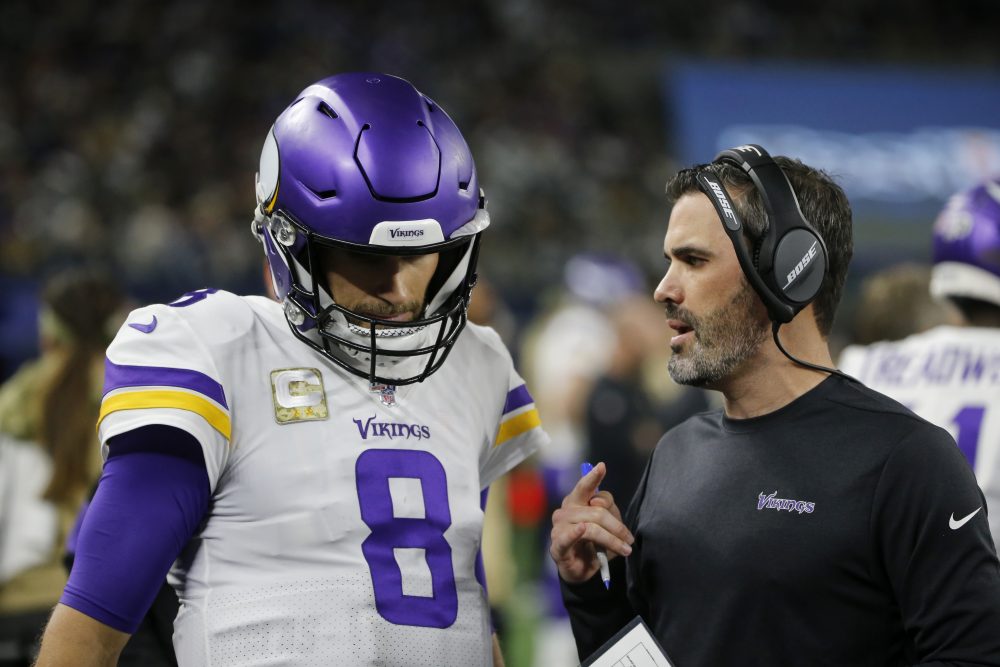 The Browns admired Kevin Stefanski’s work with the Vikings offense, which ranked eighth in the NFL in scoring in his only full season as coordinator.

They believed his ability to help quarterback Kirk Cousins post a career-best 107.4 passer rating will translate to getting Baker Mayfield back on track following a step back in his second season.

They appreciated his intelligence and willingness to collaborate.

The Browns liked Stefanski enough last year for him to go from long shot to finalist in the coaching search that ended with Freddie Kitchens getting the job. They took the relationship one giant step further Sunday.

Stefanski, 37, was picked to be the next coach, a league source confirmed to The Chronicle-Telegram. An official announcement was expected Monday.

Stefanski got the job.

He made quite an impression when he interviewed last year. Despite having served as a play caller for only three games, he finished runner-up to Kitchens, who was fired Dec. 29 after going 6-10 in his only season.

Chief strategy officer Paul DePodesta wanted to hire Stefanski in 2019 but was overruled by owners Dee and Jimmy Haslam and then-general manager John Dorsey. DePodesta directed the search this year, Stefanski was the only repeat interview and got the nod as the 18th full-time coach in franchise history.

“This is a fantastic hire,” ESPN analyst Rex Ryan said. “His reputation is as a leader of men. This is a young superstar.”

The decision completes a two-week process that finished with the Browns the last of five teams with vacancies to hire a coach. The Browns interviewed eight candidates, following through on the plan to run a disciplined and thorough search, even if it tested the patience of fans.

Stefanski is the fifth coach hired by the Haslams since they bought the team in 2012. Rob Chudzinski and Kitchens lasted a year apiece, Mike Pettine two and Hue Jackson 2½. He’s the 10th full-time coach since the team returned in 1999.

“I’m a little bit more guarded,” Saints coach Sean Payton said as a guest analyst on ESPN. “Not about the hire, just about the functionality of the organization. I feel like it’s news every year at this time, they’re hiring somebody.”

Stefanski is in his 14th season with the Vikings, working for three head coaches and coaching quarterbacks, running backs and tight ends. He’s never been a head coach at any level.

Stefanski learned from veteran assistant head coach/offensive adviser Gary Kubiak this season and implemented a diverse and balanced system with a heavy emphasis on the run game, as directed by coach Mike Zimmer.

The Vikings upset the Saints in the first round of the playoffs and were eliminated Saturday, when they managed only 147 yards and seven first downs as San Francisco’s front four dominated. The rushing game was held to 21 yards on 10 attempts and Cousins was sacked six times.

Saleh and McDaniels were the other finalists.

Saleh impressed during his interview, but Stefanski’s offensive background may have been the difference. The decision wasn’t made until Sunday morning, but the matchup Saturday didn’t have an impact.

“Wow just wow…… just W….O….W…. guess I should have expected it,” 49ers cornerback Richard Sherman tweeted less than 24 hours after stumping for Saleh to get the job.

McDaniels was the preference of many fans but wasn’t a fit with the organizational structure of coach, general manager and DePodesta reporting directly to ownership. McDaniels also brings baggage after a bad two-year stint as coach in Denver a decade ago and backing out on the Colts two years ago.

The next step is finding a general manager. Dorsey and the Browns parted ways Dec. 31 when he refused to take a reduced role.

Eagles vice president of football operations Andrew Berry is a logical choice, and the Browns requested permission Saturday to interview him, according to a league source. Berry was vice president of player personnel with the Browns from 2016-18 and also reportedly favored Stefanski in the search last year before leaving for the Eagles.

The Browns may also request an interview with Vikings vice president of player personnel/assistant general manager George Paton. The plan is for Stefanski to be heavily involved in the search.

Stefanski has been around professional sports throughout his life, as his father, Ed, was a longtime general manager in the NBA and works as a senior adviser for the Detroit Pistons. Stefanski went to high school in Philadelphia and was an All-Ivy League safety and captain at the University of Pennsylvania.

One of the key factors in whether Stefanski will be successful is how Mayfield develops. The No. 1 pick in 2018 threw an NFL-rookie-record 27 touchdown passes but regressed in Year 2 with 21 interceptions.

Stefanski did good work with Cousins, who overcame a history of big-game flops with the playoff win in New Orleans. With receivers Odell Beckham Jr. and Jarvis Landry and running back Nick Chubb, the Browns have similar weapons to Minnesota’s Stefon Diggs, Adam Thielen and Dalvin Cook.

Stefanski is described as an even-keel personality in an emotional game.

Stefanski’s first priority will be compiling a staff. Browns special teams coordinator Mike Priefer worked with Stefanski for eight years in Minnesota and seems likely to stay. Quarterbacks coach Klint Kubiak is one of the Vikings assistants who could be candidates to follow Stefanski.