Commentary: The latest coaching hire is all about owners Dee and Jimmy Haslam, and if they can finally manage to get it right 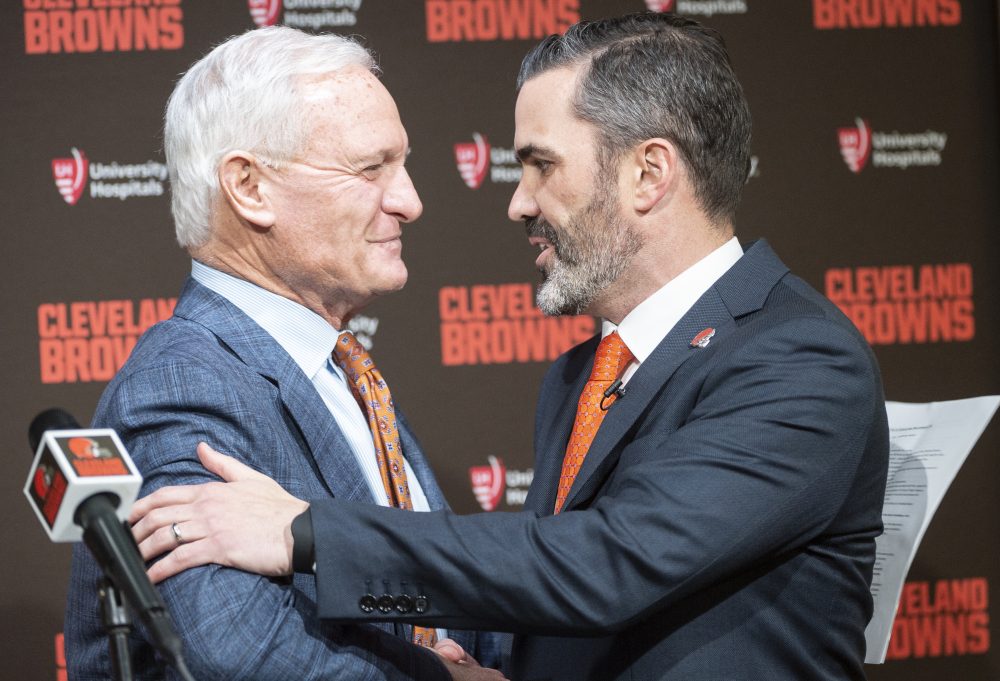 Does it even matter who it is?

Not with that track record.

He’s been given a five-year contract, which means the Browns will still be paying him for four more years after he is fired at the end of this year, which, history tells us, is a distinct possibility, given that three of the previous five fired coaches were fired after working for the current owners for one year or less (the owners inherited Shurmur, then fired him at the end of that season).

(Here’s where we exchange silent glances).

Yes, that’s what the owner said.

Coach No. 6 was introduced to the assembled media, accompanied by the by-now familiar pie-in-the-sky soundtrack that comes with the turning of the page by the chronically downtrodden.

Ownership chirped its predictably enthusiastic belief that this time — no, really — it had found its man. Honest. It’s definitely him. Because, well, just because.

If this fan base has learned anything from this debased franchise it’s that the next coach is never the right coach, and it typically doesn’t take very long to come to that conclusion, as witness the latest misfire, Coach No. 5, whose chips were cashed in by the house after one year at the whoopty-hell table.

Enter Coach No. 6, whose biggest red flag is that he’s been hired by an ownership demonstrably incapable of hiring a quality NFL coach. That’s not a big deal for ownerships in most walks of life. But if you own an NFL franchise, it’s pretty much the biggest deal there is.

The Browns’ current ownership is 0-for-5.

How many mulligans do they get?

“We’re looking for someone for the next 10-plus years,” said Paul DePodesta, of the search that coughed up Coach No. 6. DePodesta is the chief strategy officer for a franchise desperate for some quality strategy.

Whether the team has found someone for the next 10-plus years remains to be seen. Coach No. 6 has no prior NFL head coaching experience, and neither did most of the previous failed coaches hired by ownership. But he does have the ability to gracefully talk around the elephant in the room.

When asked about coming to work for a franchise with such a sordid recent history, Coach No. 6 said, “We’re not looking backward. We’re moving forward.”

Ownership can only hope so, because the rearview mirror does not paint a pretty picture. This is no longer about a given coach in a given introductory news conference. He could be anybody. And, statistically, the somebodies hired by this ownership have been professional nobodies.

Tuesday’s news conference was more about ownership than Coach No. 6. Because the owners have more riding on the outcome of this hiring than does the latest new coach. At this point, it doesn’t matter who the new coach is, because the owners haven’t changed, and the issue continues to be not the coach but those hiring the coach.

Godspeed to Coach No. 6, because this is getting pathetically monotonous. All these Coach No. (whatever) introductory news conferences have become one in the same.

It’s a broken record played by a broken franchise. Ownership raves about the new hire. The new hire speaks enthusiastically about the chance to join such a great organization, even though it isn’t. Everyone feels good about everything.

Then the next season starts, and 16 games later there’s another introductory news conference.

The most accurate comment of the day was offered by the chief strategy officer, who said, “Nothing I can say will convince people we got the right guy. Let’s win some games.”

Not firing a coach every year or two would also be refreshing.

Maybe that trend will stop with Coach No. 6.

Because this whole tired cycle is getting old, and despite leading the organization down so many dead-end streets, ownership doesn’t seem the least bit discouraged.

“It was actually,” said the owner, of the coach search that ended Tuesday, “a very enjoyable experience.”

(Here’s where we exchange silent glances).