Kevin Stefanski discusses being the organization’s point guard, promising his kids a dog and matching the players’ personalities with production 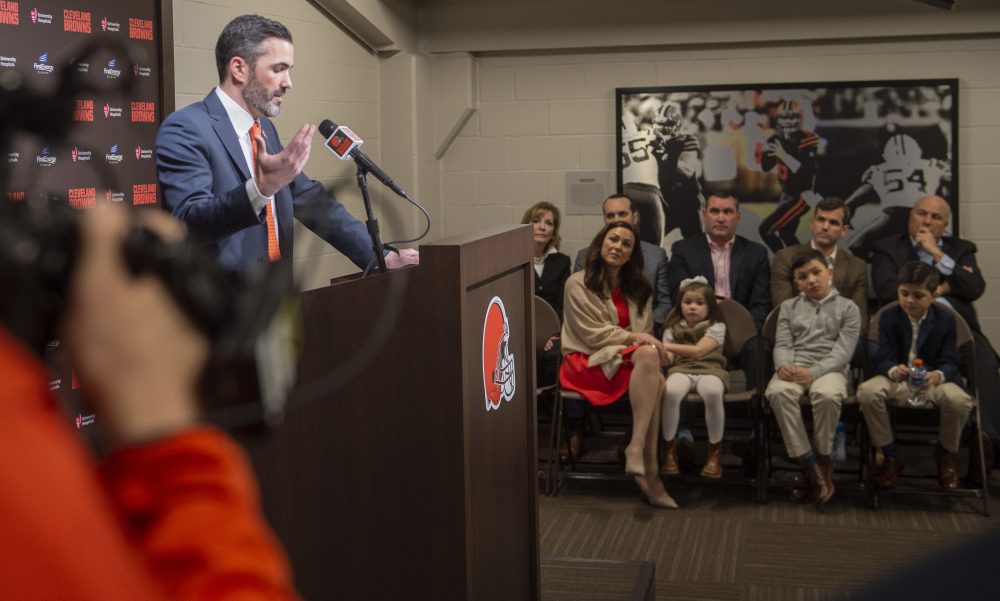 CLEVELAND — New Browns coach Kevin Stefanski’s face was everywhere inside FirstEnergy Stadium — on the giant scoreboards and the TV monitors — and he stood alone at the podium to address the media.

He’s clearly comfortable accepting the role as face of the franchise but doesn’t need it.

“I’m ready and willing and excited to lead from out in front as I stand before you,” Stefanski said Tuesday in his introductory news conference. “And I’m also ready and willing to step back and let the success and the light shine on our players where it should be.

“To use a basketball term so my dad can understand this, I want to be the point guard for this organization. I want to bring the ball up and I want to share the basketball and let someone else get an easy bucket.”

Ed Stefanski, a longtime NBA executive who works in the Detroit Pistons front office, sat a short pass away with the rest of the family. Kevin Stefanski had walked in with wife Michelle, boys Will and Gabe and daughter Juliet, all in their Sunday best.

Stefanski, 37, spent the last 14 years with the Minnesota Vikings working his way up from coach’s assistant to offensive coordinator. His kids were born during his time there, so he was forced to make concessions when he decided to take the Browns job and move them southeast.

“As anyone with young people and if you’ve moved before knows, it’s a tough 48 hours that we’ve been through and we’ve made some promises to these children,” he said. “We’re getting a dog. We’re going to Disney World and Lord knows what else has been promised since you guys got here.”

Owners Dee and Jimmy Haslam were looking for a strong leader and believe they found him one. Stefanski’s never been a head coach but is confident he can make the jump from coordinator and handle strong personalities like quarterback Baker Mayfield and receivers Odell Beckham Jr. and Jarvis Landry.

“Personality is welcome, your production is required,” Stefanski said.

Stefanski says he’s “undeterred, undaunted” by past, welcomes challenge of turning around Browns

He said he spoke briefly with some of the players, including those three.

“No. 1, we have some good players to work with. It is nice to sit here and start to think about how we can attack a defense,” he said. “We will try to be explosive, obviously, in the run and pass game. We are going to maximize the talents of the key players.”

He’s a fan of Mayfield.

“I will just tell you the skill set that our quarterback has is legit. He is as accurate as they come,” Stefanski said. “I really think this kid has a chance to take off.

“The sky is the limit for the kid.”

He promised the offense and defense will attack and he’ll have a “marriage” between the run and pass games. He called plays this season but said whether he calls them with the Browns will depend on his staff.

“If there is someone that I feel gives us the best chance to win, that person will call the plays. It does not have to be me,” he said.

“All of us have some ego, but he has almost no ego,” Haslam said.

Stefanski said he’ll take his time on hiring assistants, including meeting with the holdovers from Freddie Kitchens’ staff, but an NFL Network report said the defensive coordinator choice is down to keeping Steve Wilks or bringing in 49ers defensive backs/passing game coordinator Joe Woods.

Woods has been an assistant for 16 seasons. He’s in his first year with the 49ers after two years as coordinator for the Broncos, who ranked third in total defense in 2017 (290.0 yards).

Stefanski began in the NFL in 2006 as the assistant to coach Brad Childress and spent three years in the role before moving into coaching, where he led quarterbacks, running backs and tight ends.

“I know what it’s like to grind,” he said. “There’s no task that is too menial and I know how important every role in an organization is, the impact it plays in winning.”

His low-ego, collaborative approach fits with the organizational alignment chased by Haslam.

“Well, I think ‘alignment’ is a great word. Another way of saying it — we are all on the same page,” Stefanski said. “That is important. We know this, if we are plowing in the same direction, we got a chance.”

Commentary: Browns look predictably clueless as they wander through coaching search without a pick
Coach Kevin Stefanski sees “legit” skill set in Baker Mayfield, promises to make life easier for him as QB