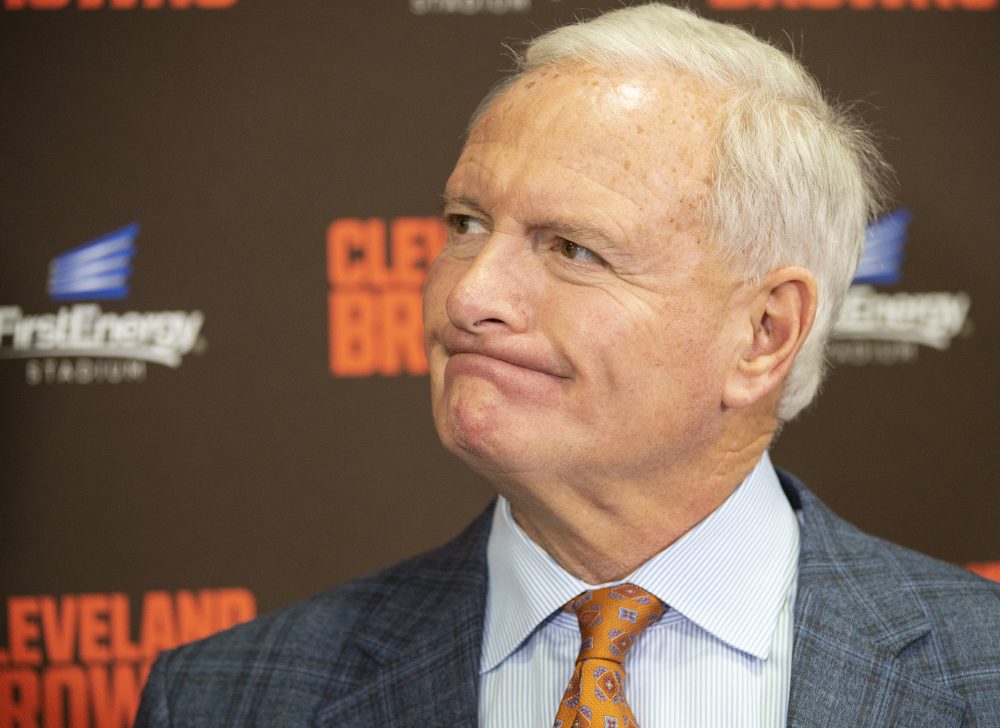 CLEVELAND — Owner Jimmy Haslam has always met with his coach the day after games.

“Let me ask you — if you owned a pro football team, would you meet with the head coach the Monday after the game?” he said Tuesday after coach Kevin Stefanski’s introductory news conference. “Of course, you would. Of course, we would.”

But Haslam took offense to a report that he told the eight coaching candidates they’d have to submit the game plans to him for review.

“Rumors out there, though, about presenting the game plan and those kind are just totally inaccurate and I really think they’re irresponsible,” he said. “I really do.”

Haslam has been labeled a meddler in his eight years as owner, especially with the perception he pushed the organization to draft and play quarterback Johnny Manziel in 2014. He said the Monday meetings with the coach have been his standard practice.

The report, by Dustin Fox of 92.3 The Fan, also included that the Browns told the candidates they must present the game plan to the analytics department by Fridays.

“It’s not true,” Stefanski said. “I like that report. That was a good one. It’s silly season for that type of stuff.”

He does embrace analytics and said he had meetings as Vikings offensive coordinator in 2019 to discuss how to handle game situations and an opponent’s tendencies.

“I’m looking for any edge we can get on gameday,” Stefanski said. “We’re looking to make informed decisions. So as a play caller or whether it may be in player evaluation, information is power. So we like to have a lot of information that informs our decisions.”

The Browns confirmed a member of the analytics department will be on Stefanski’s headset during games to help with situational decisions. The team did that with previous coaches Hue Jackson and Freddie Kitchens.

“If you went a spectrum of the NFL, it’s pretty common to have somebody in the booth helping you decide when to call timeout, when to go for it, etc.” Haslam said. “That’s not anything that’s really unique.”

“I think all 32 teams do that,” chief strategy officer Paul DePodesta said. “In fact, there are a bunch of head coaches that say, ‘Hey, I’m going to need a guy on a headset’ and we were able to tell them, ‘Oh, we’ve got a guy, don’t worry.’”

Analysis: The latest hire is all about the Haslams, and if they can finally manage to get it right

DePodesta’s four-year contract expired earlier this month but he plans to stay with the Browns. He reports directly to Haslam.

“My feeling has been, and I talked to Jimmy about this, let’s get the head coach in place, let’s get the GM in place, the rest of it will work itself out,” DePodesta said. “I’m not concerned about it, I expect to be here.”

DePodesta spent 20 years in Major League Baseball front offices before joining the Browns in 2016. He still lives in the San Diego area but said it doesn’t affect his job performance.

“It’s funny. I’ve seen a report that I live in San Diego, I think my wife and kids would take issue with that characterization,” he said. “Look, I’ve been here every week since the beginning of training camp.”

He said he and his wife made the decision to raise their kids there 10 years ago around extended family. He knew he’d have to commute, including during his time with the New York Mets.

“It hasn’t been an issue,” he said. “I’m here every single week and we get our work done.”

“Paul is a very smart guy. The fact that he’s not there every day I don’t think makes a huge difference. He’s there more days than he’s not,” Haslam said. “He’s a great contributor. His role will remain the same.”

AN EYE ON DIVERSITY

Of the five coaching openings in the NFL this offseason, Washington’s Ron Rivera was the only minority hired. The 32-team league has four black head coaches and one black general manager.

“I am going to do everything in my power and my role to effect change there,” said Stefanski, who’s white. “It is something that I brought up when I met with Dee and Jimmy last year, and it is important to me that we develop minority coaches, particularly on the offensive side of the ball.

“Last year in Minnesota, we hired two African American quality control coaches on the offensive side of the ball because it is important to develop young coaches in that area. That is the way that I can effect that change.”

The Fritz Pollard Alliance called the lack of minorities in power positions “shameful” in a statement Monday.

“I think our record in diversity hiring is pretty strong,” said Jimmy Haslam, who hired Jackson as coach, Ray Farmer as general manager and Sashi Brown as head of football operations. “We’ve been really strong supporters of the Fritz Pollard, John Wooten, who used to run it, is a former Brown and a great friend of ours, we talk to him frequently.

“As an organization we need to be conscious of who we’re hiring at all positions.”

The search for a general manager has become the top priority.

“It would be unfair to Andrew and any of the other candidates to comment on them right now,” Haslam said. “I’ll say that we have begun the GM process, we’ll work through it just like we did with the coach process, the only difference is Kevin will be involved. So the search committee goes from four members to five.

“I don’t want to say how long it’s going to take, the important thing is to get it right, so we’re going to focus on that.”

“It’s unfair to comment on any of the coaches,” he said. “All of ’em are very good coaches, we learned a lot from all of ’em.”

** DePodesta said the GM will have “some say” on the football operations, including whether assistant GM Eliot Wolf and VP of player personnel Alonzo Highsmith stay. They were brought on board by former GM John Dorsey.

“I will tell you Eliot Wolf and Zo, they were very helpful in the head coach search over the last couple of weeks and they’re right now grinding away on the draft and even helping out with assistant coach work, so they’ve been terrific,” DePodesta said.