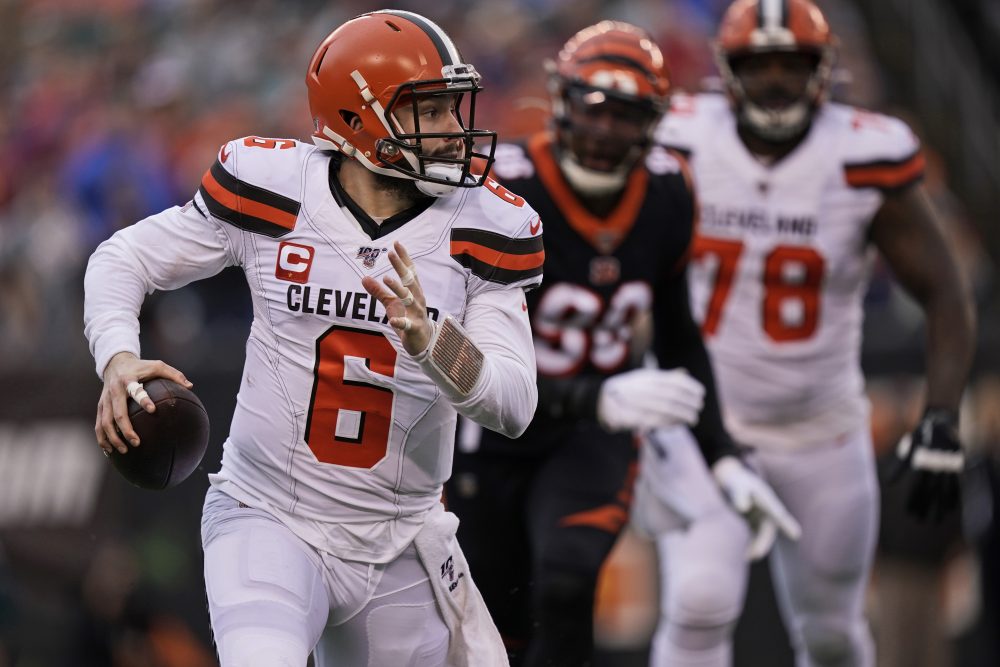 Coach Kevin Stefanski sees everything he needs in his new quarterback, Baker Mayfield.

“Certainly, when you are talking about this job and this franchise and everything that goes with it, you think about the quarterback,” Stefanski said Tuesday in his introductory news conference. “The sky is the limit for the kid.

“I will just tell you the skill set that our quarterback has is legit. He is as accurate as they come.”

During an interview with SiriusXM NFL Radio on Wednesday, Stefanski called accuracy the No. 1 trait in a quarterback and praised Mayfield’s “legit movement skills” that allow him to make plays on the move whether by design or improvisation. He also raved about his intangibles.

“And then maybe more than anything … it’s that intangible thing that no one can really name, and it’s that ‘It’ factor,” Stefanski said. “And he has it. He’s won at every level he’s been playing at. I think it’s how you carry yourself. It’s how you are as a teammate. Do you make the guys around you better? And I think Baker checks all those boxes.”

Mayfield was most upset about the interceptions.

“So it’s quite frankly embarrassing for me, and something I take pride in,” he said after the season-ending loss to the Bengals. “I’m not happy with that, but there are a lot of things where I can look back on the film and point out exactly where I went wrong. That’s the good thing about it — it all can be fixed.”

The search committee didn’t limit itself to coaching candidates who have expertise with quarterbacks, but it was a selling point for Stefanski. He was assistant quarterbacks coach for the Vikings from 2009-13 and quarterbacks coach in 2017-18 before taking over the coordinator role for the final three games of 2018 and all of 2019.

“Go back and look at 2017 and what he did with Case Keenum and then look at what he’s done with (Kirk) Cousins in ’18 and ’19,” owner Jimmy Haslam said. “We actually talked to Case Keenum, etc., talked to Cousins. So the feedback there was really good, and I think he’ll be a big help to Baker, which I think we all know how important that is for the team.”

Stefanski’s first time in the quarterback room in 2009 had him working with a future Hall of Famer. Brett Favre joined the Vikings for his final two years before retiring for good after the 2010 season.

Stefanski also tutored Matt Cassel, Christian Ponder, Donovan McNabb and Joe Webb. He learned from a variety of coaches and coordinators and will bring a version of Gary Kubiak’s scheme, which is based on a strong run game, play-action passes and quarterback bootlegs.

Stefanski said he’ll decide whether to call plays based on the composition of his staff. Regardless of the choice, Mayfield will have his third play caller (Todd Haley, Freddie Kitchens), fourth coordinator (Haley, Kitchens, Todd Monken) and fourth head coach (Hue Jackson, Gregg Williams, Kitchens). He just finished his second season.

“I think there are plenty of things that we will do schematically to, hopefully, make life easier on him, and looking forward to the jump that this kid will take,” Stefanski said. “He is such a young player and the guys I have been around, when they put their mind to it and they start to grind on this thing and understand the whys and the concepts that we are teaching, I really think this kid has a chance to take off.”

Making life easier will take hard work. The system will be new for Mayfield, and Stefanski will tweak his mechanics and footwork after they got sloppy in Year 2.

“He is the trigger man and that is the exciting part for me,” Stefanski said. “I worked with a lot of quarterbacks, a lot of great ones over the years, and I am looking forward to hunkering down with him and getting to work. Like any one of our players, when they walk in the building, we will have a detailed plan for them about how they are going to improve.”

Mayfield last talked before Kitchens had been fired but was prepared for significant changes.

“I’m up for any challenge, always,” he said. “It doesn’t matter to me what it is, I’ve got to do my job first and foremost.

“That’s the main part about being quarterback for this franchise — taking care of my job, leading these guys, showing up every day and being the same person consistently. It doesn’t matter whoever is around here, and whatever locker room we have, and what guys I have surrounding me, I have to be the same person.”

Haslam said the coaching search reinforced that the Browns have the right guy in Mayfield.

“I think Baker was given a hard time I will say this year by a lot of people,” Haslam said. “We talked to eight head (coaching candidates), some of them offensive, some of them defensive, and their comments in terms of his ability to play quarterback were all outstanding.

“Now Baker’s like all of us. He can get better, and he has some things to work on. But the confidence when these outsiders (were) looking at our team and particularly looking at Baker was outstanding.”

Kevin Stefanski discusses being the organization’s point guard, promising his kids a dog and matching the players’ personalities with production
Paul DePodesta wants to help Browns find their Way