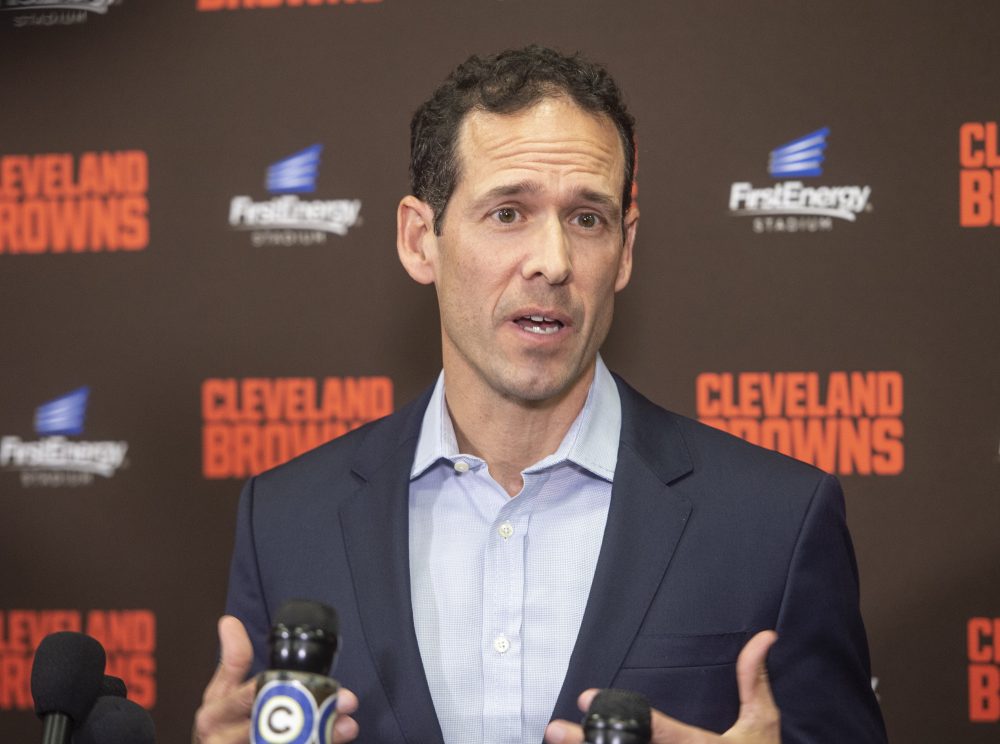 The Patriot Way has won six Super Bowls since the turn of the millennium, establishing a remarkable dynasty unlikely to be duplicated in the free agent era.

The Dodger Way led to four World Series from 1955-65 and created a blueprint for how a well-run organization operates.

The Browns are still trying to find their way — and their Way.

With five new coaches, five new heads of football operations and a .262 winning percentage since Dee and Jimmy Haslam bought the team in 2012, the Browns have been going the wrong way for far too long. Chief strategy officer Paul DePodesta says it’s his job to establish the winning culture.

“I’ve had the opportunity to be around some great organizations, in multiple sports, and one thing that’s pretty clear across all of them is that they all have an identity, right? A way,” DePodesta said last week. “You hear about the Patriot Way or back in the day the Dodger Way or whatever it might be. The teams that are great are relentless about implementing that way. And that’s what we need to do here. And I think that’s really my charge.”

DePodesta was adamant the constant turnover must stop and that it’s had “a real cost” on the organization.

“Change isn’t a productive way,” he said. “We need some stability to get the right way, and then carry it out over a long period of time. And these things are difficult. You don’t institute a way and then immediately within six months that’s the way everything is. They build and build over time. But if you’re consistent about implementing it, then I think you’ll get there.

“The other thing I’ll say is there isn’t one way. We have to create ours and then own it.”

DePodesta has played a significant role in the organization since he left baseball in 2016. He’s re-emerged as a public figure after the departure of general manager John Dorsey on Dec. 31.

DePodesta, a Harvard graduate, directed the search that landed coach Kevin Stefanski and is leading the quest for a general manager. He was part of the hiring process that settled on coach Freddie Kitchens a year ago but took a backseat to Dorsey.

“We feel we ran a very thorough and deliberate process this time, we feel great about the result,” DePodesta said. “At the same time, I don’t think that’s going to give anybody any comfort, right? We need to go out and win, we need to go win football games and I don’t think there’s anything I can say today to convince people that, hey, we got the right answer.”

Stefanski said he’ll team with DePodesta and whomever is hired as general manager for a “collective vision.”

“Paul comes at it from such a unique perspective. I think we’re lucky to have that perspective,” Stefanski said in an interview with SiriusXM NFL Radio. “He’s a collaborative person, he’s a collaborative thinker and I can tell you we’ve already had some really good discussions about what the future of this franchise holds.”

DePodesta’s been a bit of a mystery man in his time with the Browns.

His background’s in baseball, made famous by his vital role in the “Moneyball” book and movie. His primary residence is in San Diego. His title, while sounding important, is vague.

He was asked, bluntly, what he does.

“My kids ask me the same question, because they want to tell people at school,” he said. “Look, (Stefanski) and I talked a lot today about a shared vision, right? I think my role really first and foremost is to not only help us create but also implement that shared vision. And then ultimately make sure that we stick to it. Really relentlessly.

“So I look at all the processes that are within a football operation, and whether that’s hiring someone, whether that’s how we do scouting, whether it’s how we look at things with numbers, I sort of dig into all those processes and make sure that they align with our vision and that we all as a group continue to stay aligned and be on the same page.”

DePodesta’s contract expired this month, but it will be handled after the general manager search.

“I’m not concerned about it, I expect to be here,” he said.

“Paul is a very smart guy. He’s a great contributor. His role will remain the same,” Jimmy Haslam said. “And Paul’s going to do everything he can to make the head coach and the general manager, once we select that person, successful. We feel really good about Paul’s role and his ability to affect the organization.”

The confusion surrounding DePodesta includes the role of analytics within the organization. The term is used as a catch-all, and DePodesta’s reputation in baseball was built on using data, especially with the Oakland A’s.

“I think people have a really warped view of maybe what analytics is,” he said. “I think I maybe have a very different conception than what everybody else has. When I think of analytics, I just think of having frameworks to make decisions under uncertainty.

“I mean, look, everything we do in these jobs is really built around uncertainty, what players we’re going to take in the draft, what we’re going to call on third-and-8, it’s all about uncertainty, so what frameworks can you create that at least maybe stack the odds in your favor, give you a better chance of being successful and whether that’s drafting a player or hiring a coach or calling a play, it’s not necessarily about numbers and spreadsheets.”

The draft is a sore spot with fans after former head of football operations Sashi Brown’s two years in charge. The Browns traded down in the first round in 2016 and ’17 and passed on quarterbacks Carson Wentz, Deshaun Watson and Patrick Mahomes.

DePodesta was involved in those drafts and is still ridiculed for his comment that Wentz wouldn’t be a top-20 quarterback. He was asked what he’ll do in the new organizational setup.

“A process-oriented role,” DePodesta said. “I’m not going to pick the players, but I am going to try to make sure that the players we do pick, again, align with our vision of what we believe is a winning franchise.

“So my charge is not to watch tape and say, oh, man, this guy’s got great feet. We’ve got scouts who are way better and way more qualified than I am to do that. But when we come down to make a selection, it is my role to say, OK, are we making a decision here that actually aligns with our way and does it make sense?”