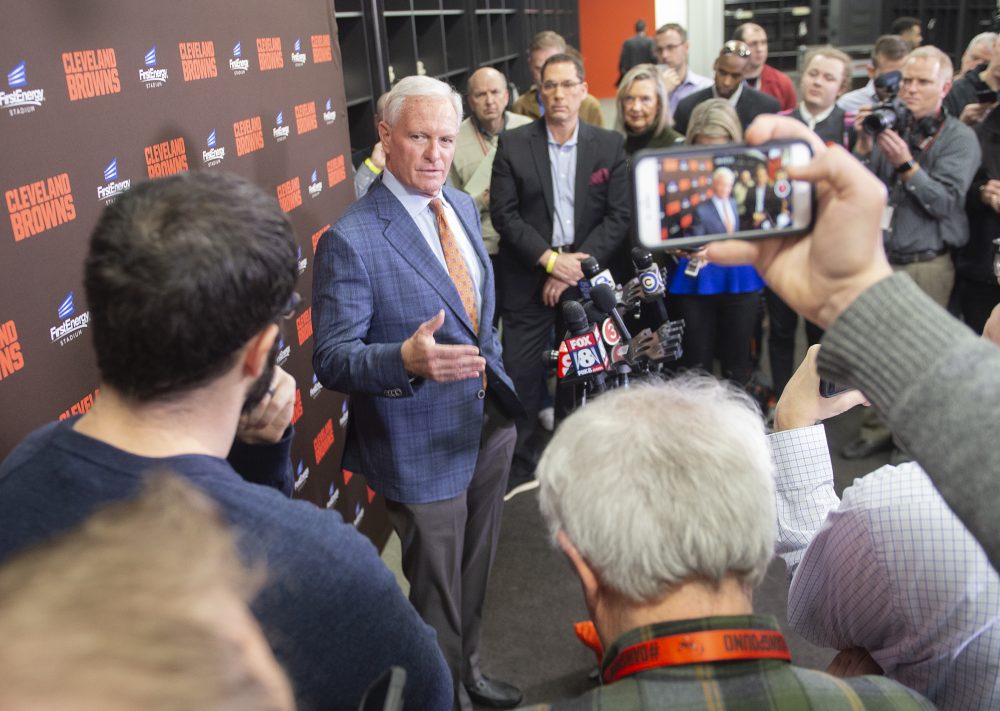 Do the Browns ever have a “normal” offseason? A quiet offseason? An offseason in which everyone in the team bunker on Lou Groza Boulevard isn’t diving to the floor to avoid another one of those screeching, rapidly deflating unemployment balloons rocketing unpredictably over, around and through the already-jumpy executive offices?

Why do the Browns’ offseasons always seem like the running of the bulls at Pamplona?

The offseason is more exhausting than the in-season.

Is this the way the Patriots do it?


I don’t know about you, but I could use a nap.

This week it was the hiring of a new general manager, who will work with the new head coach, and the old chief strategy officer — who, to the annoyance of the masses, commutes to work not by bike, bus or boat, but by Boeing — in crafting the latest attempt at building a functioning football team.

If it does, you must not be from around here.

The buzzword this time is “alignment.” That means everyone in the front office is on the same page, in the same book, working for the same goal in the same manner.

How hard can it be, right?

You must not be from around here.

The Browns have staggered down this same potholed road before. Not that long ago, really. They are quite familiar with the greenery, the scenery and the buffoonery lurking on the boulevard of broken dreams, which winds endlessly through Haslam Acres.

It’s called Analytics Avenue, and the last time the Browns ventured down this baby they got hit by a bus, an accident made that much more unfortunate when they realized that the driver of the bus was them.

So you ARE from around here!

Yep, it was a mere four years ago, 2016 — the year the Indians made it to the World Series — when Browns ownership, operating under the premise that nothing else had worked, decided to hitch its battered, three-wheeled wagon to the emerging science of analytics, which is Greek for “if it doesn’t work, blame the numbers, not us.”

The Browns’ first flimsy foray into analytics left fans foaming at the mouth. They debuted with a record of 1-15 then backed it up the next year with a win-free 0-16 monstrosity, which cost some employees their jobs, and resulted in a 180-degree U-turn by the organization.

Dorsey was an old-school football gunslinger who rode into town, quickly declared that the Browns needed some “real players,” and promptly set about rounding up some — rap sheets be damned.

The initial results were encouraging. We know this because the Browns didn’t wait until the end of the season to fire Hue Jackson. They did it in the middle of the season. For the Browns, that’s progress.

The year was 2018, the year the Indians won their third consecutive division title. The Browns started 2-6-1, blew it up, flushed the analytics and finished 5-2. Finally! The sweet smell of non-failure. Those were such heady, aromatic days that King for a Day Dorsey was allowed to essentially handpick the next head coach.

I believe it was the great philosopher and ESPN college basketball analyst Bill Raftery, who coined one of the guiding principles for those taking on the various challenges presented by life itself, whether it be planting a garden, putting a man on the moon, shooting a midrange jump shot, or building a non-disastrous NFL team, when he said, while clearly channeling Plato, by way of Aristotle: “Get those puppies organized!”

Because that’s where the Browns are now.

Trying to get their puppies organized.

There’s nothing sadder than an unorganized organization, and over the last eight years there has been no organization more unorganized than the Browns. The proof is in the pudding.

They need to either master one of those two disciplines, or invent a third.

(If you still haven’t done all your Groundhog Day shopping, I’ll be at Tribe Fest on Saturday, signing copies of my book “Mike Hargrove and The Cleveland Indians, A Baseball Life.”)