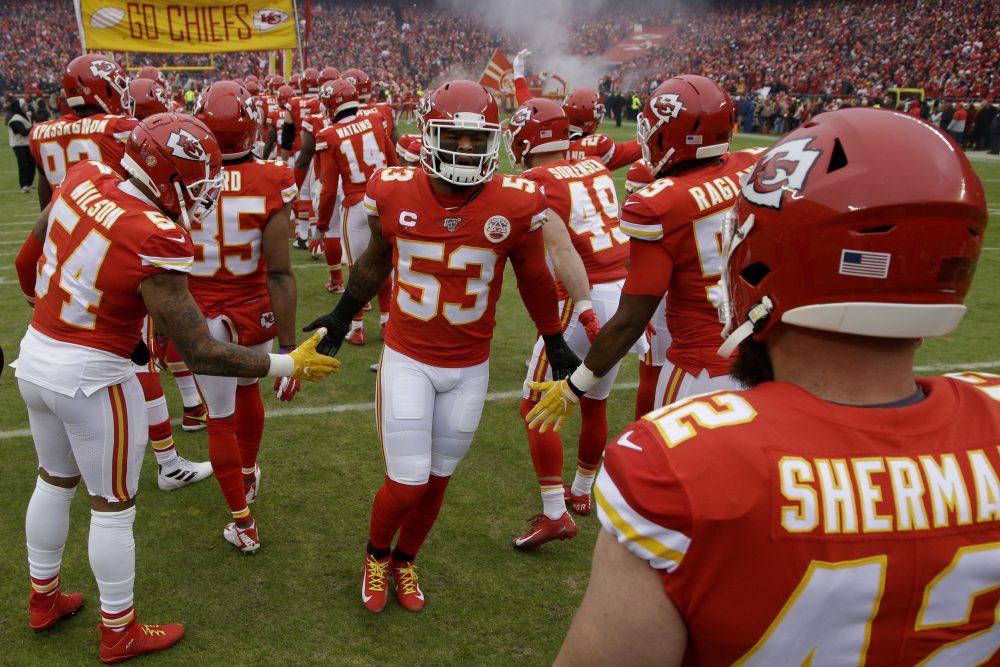 The Kansas City Chiefs trailed 24-0 to the Houston Texans in the divisional round of the playoffs. Something needed to change for the AFC West champs to avoid the home upset and host the AFC championship game for the second straight year.

Quarterback Patrick Mahomes and the offense found a rhythm and scored 41 straight points. The defense, with linebacker, playoff captain and Clearview High School graduate Anthony Hitchens in the middle, toughened and didn’t allow a point for 40 minutes and 30 seconds. The special teams provided a spark.

Another adjustment was made nearly 800 miles away in Sheffield Township. Amy Anderson retrieved the No. 53 Chiefs jersey of her husband, Brad, who died Dec. 12, and draped it on the chair Brad sat in to watch sports.

“Then it turned around crazy,” said Zach Anderson, their son. “It was pretty cool.”

No. 53 is Hitchens. He moved in with the Andersons when he was a kid and was taught by Brad to be mentally and physically tough.

Chad Anderson, the youngest of the four brothers — two biological, two through love — was at Arrowhead Stadium for both playoff wins that put the Chiefs into the Super Bowl for the first time in 50 years. He heard the story about the jersey and the chair.

“It was like one or two minutes later, that’s when they started making that big comeback,” he said.

The emotion of playing — or watching a loved one — in the Super Bowl for the first time can be overwhelming. The recent loss of a parent adds a complicated layer.

The Andersons and Hitchens will experience the whole gamut Sunday in Miami Gardens, Fla., when the Chiefs play the San Francisco 49ers in Super Bowl LIV.

“It’s tough. It’s kind of a bittersweet moment, because he was Anthony’s biggest fan, like all of ours,” Zach said. “We always joke he’s got to be rolling in his grave right now knowing that Anthony’s in the Super Bowl.”

“He would be just so happy for Anthony,” Amy said.

The Anderson family will be reunited in Miami. Amy, the mom, has been down there all week, with Zach, 28, Chad, 24, and James Washington, 28 — the second son taken in — arriving later in the week.

“It could be a once-in-a-lifetime experience, so I don’t want anyone to miss it,” he said in response to a few questions submitted by The Chronicle-Telegram through the media relations staff. “I’m just excited for the moment.”

The story’s been told before, but remains an inspirational one. Hitchens reaching the Super Bowl in his sixth NFL season provides a chance for it to be heard on American sports’ biggest stage.

Zach and Hitchens were friends in junior high, and Hitchens started spending more time at the Andersons’ house in 2004. Eventually he asked his mother, Norma, and Brad and Amy if he could live with the Andersons. He moved in and stayed.

They raised him as one of their own, along with Washington, who joined the family around the same time.

“It’s amazing. It’s kind of the thing that you could only write a book or make a movie about,” said Clearview coach Mike Collier, who coached all four boys. “But that family just kind of embraced the people around them and this community kind of rallied around them when they were in need.

“But I think about everything and the adversity they’ve been through and that Anthony’s been through, and losing his father just a couple months ago, it’s sad that he won’t get to witness it, but he was such a huge part in Anthony just becoming more disciplined and being mentally and physically tough. What a great role model he was for him and just helped him to raise his game to a whole nother level.”

Chad, the youngest by a few years, shared a bedroom with Hitchens growing up and was unfazed by the two additions to his family.

“It’s just natural. Just everything happened for a reason,” he said. “We’re grateful for it.”

Chad was at both playoff games in Kansas City, and Amy attended the AFC title game against the Titans. Brad, who died unexpectedly after battling non-alcoholic sclerosis of the liver since 2008, was front and center in their thoughts.

“After last week’s game, it got the best of me,” Chad said. “Because he wanted to see this so bad. Last year, he wanted to see it so bad. It’s like one of them things, we wish he was here but …”

Hitchens posted a message to Brad on Instagram after his death.

Brad’s presence will be felt at the Super Bowl.

“That’s what I keep telling Anthony,” Amy said. “Your dad will be in your ear and on the sidelines and in the plays with you.”

Lorain County doesn’t get many trips to the Super Bowl.

Elyria Catholic graduate Matt Wilhelm won Super Bowl XLV with the Green Bay Packers in 2011. Elyria graduate Chase Farris was on the Patriots’ practice squad for their victory in Super Bowl LI in 2017. Walter Rock with Washington in Super Bowl VII in 1973 is the only other Elyria High graduate with Super Bowl experience.

Clearview High will be represented for the first time, and the Clippers are embracing the moment. The rock at the school was painted red for the Chiefs with No. 53 on it.

“We talk to the kids all the time about Anthony and about the road — he didn’t have it easy. Things didn’t just come easy for him,” Collier said. “He was a gifted athlete, but by no means have I never seen more talented athletes here. He just worked his tail off.

“He did everything that he had to do to get to the next level. Fought and clawed and scratched and worked for everything he got.”

Hitchens seemed headed for the University of Akron before a late offer from Iowa. He chose the Hawkeyes, settled in as a linebacker and was drafted by the Dallas Cowboys in the fourth round in 2014. He became a free agent and signed a five-year, $45 million contract with the Chiefs in 2018, including $21 million guaranteed.

“The kids around here talk about him all the time,” Collier said. “While we know that making the NFL’s always very low odds and we try to be honest and truthful with our guys, at the same time, we don’t crush their dreams, either. If it’s something you want to go for and work for, then we push for that.”

Hitchens (6-foot, 235 pounds) put in the work to make himself a draftable player and an NFL starter. The Super Bowl will be the fifth playoff game in his two years with the Chiefs and he has 28 tackles.

He didn’t think the Super Bowl was possible when he was a kid.

“I always dreamed of it but I never thought it would ever happen,” Hitchens said. “It’s a blessing to be able to go to Miami and play in a Super Bowl. We’re definitely looking forward to it.”

He believes his appearance sends a powerful message to the kids at home.

A work ethic was instilled in Hitchens from Brad, who pulled 12-hour shifts at a steel mill for more than two decades. The grind required to make Hitchens’ journey doesn’t happen without a strong mind and body.

“He ran out of bounds one time in seventh grade, and my dad from the stands yelled louder than you can even know,” Washington said. “He told him, you are a train, you run through those guys and by the fourth quarter those guys won’t want to tackle you again.

“We started calling him Train and we still call him it.”

“That’s what everybody around here knows him by,” Chad said.

Hitchens has experienced a lot in the last year, including the birth of his first child in May, Ava-Marie. Throw in Brad’s death — Hitchens flew home for the services before playing a game the next day — and the Super Bowl, that’s a lot to process.

“We’re a strong family, and my boys are strong men and we’ve held each other up and cried with each other,” Amy said. “He’s handling it. Anthony’s always been the type to keep the noise out and just focus on what he’s got to do.”

Hitchens recorded a video last season with Brad and Amy for The Players’ Tribune about his life with the Andersons. His wife, Ashley Marie, was pregnant.

Hitchens’ ‘Mentors and Mutuality’ essay on The Players’ Tribune

Hitchens has found fame and fortune. Those who know him best say he’s the same person that deflected the attention when he starred for Clearview.

“There’s really been nothing that’s changed really in his personality, which is crazy to think about how much money he’s made, how much success he’s had,” said Zach, who plays video games with Hitchens almost every night. “He’s always been the same humble, down-to-earth guy.”

The family, who all live in Lorain County, will be in Miami to celebrate him.

“It’s just going to be a dream come true for us,” said Washington, who was chosen for the Clearview Hall of Fame this week. “I’m sure there’ll be some tears, but those are tears of joy, tears of accomplishment, everything we’ve been through, all the hard work that Anthony has put in, that my family sacrificed for us, just to give me and Anthony a chance.

“So being in those stands will mean everything. I know together it’ll be a hard moment, but I know it’ll also be special for us.”

Sitting in Hard Rock Stadium, Washington will wear a customized hoodie with 53 and “Train” on the back, Chad will have something similar, Amy will wear her Chiefs jersey.

The Chiefs fell behind in their first two playoff games but shouldn’t risk it Sunday. Not only are the 49ers talented and tough to beat when playing with a lead, Brad’s No. 53 won’t be on the lucky chair at home.