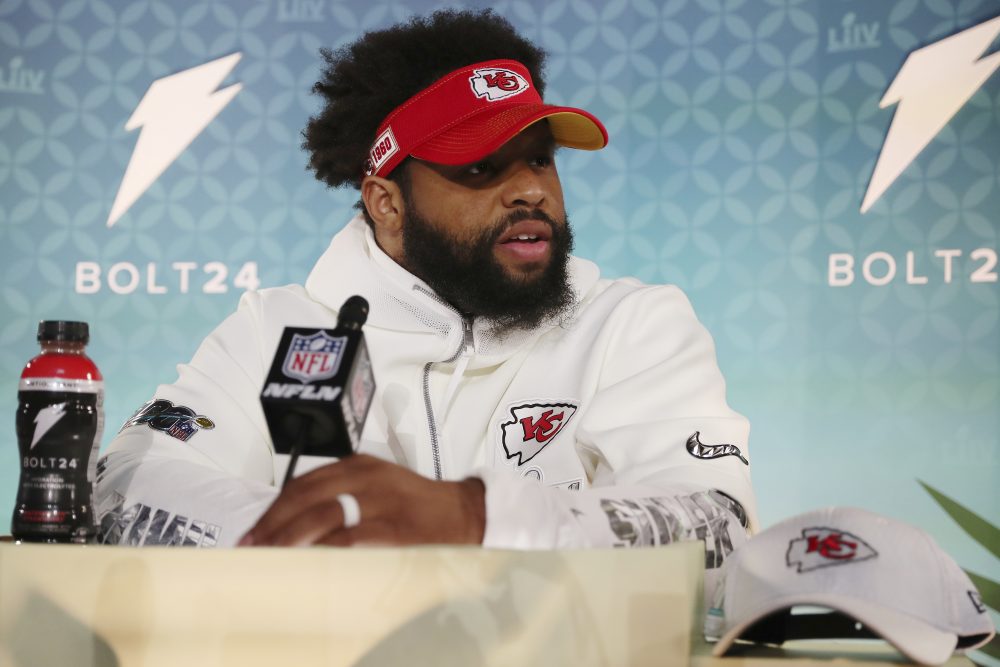 Anthony Hitchens was polite and friendly.

He answered questions for an hour. About breakfast (loves it but doesn’t eat cereal), Kobe Bryant (admires his impact, is saddened by the loss of lives but isn’t a huge basketball fan), 49ers tight end and former University of Iowa teammate George Kittle (he’s grown into a strong, big-time player) and his faith (he’s a firm believer).

He was not amused by the circus of Super Bowl LIV media night in Miami, or the repetition of the questions. He was glad when it was over, mentioning the media crush in a rare social media post.

Hitchens, the middle linebacker for the Kansas City Chiefs, doesn’t like distractions. He’s all about the game.

“He’s always been laser-focused, I think it really comes back to he’s a two-star recruit coming out of little Clearview High School,” said Zach Anderson, his brother. “He was going to go to Akron, then Iowa offered him the last couple days of signing period. Wasn’t really supposed to do much there, was a fourth-round draft pick, started right away. So I think he knows that he might not be as talented as some of the other players, but the way that he focuses and studies and knows football and just works hard is what keeps him being as successful as he is.”

Hitchens has done Lorain County proud. He’s in his sixth year in the NFL, the first four with the Cowboys and the last two with the Chiefs. He’ll be the first Clearview alum to play in the Super Bowl on Sunday vs. the 49ers.

“I’ve played in a lot of big games,” Hitchens told reporters this week during the one-hour session. “You take it all in, but once the ball’s snapped it’s a football game. If you get caught up, you might start slow, you might mess up a couple plays.

“It’s football at the end of the day. All the X’s and O’s are the same, it’s just on a bigger platform.”

The X’s and O’s vs. the 49ers begin with stopping the run. The 49ers rushed 42 times for 285 yards in the NFC championship game against the Packers. Jimmy Garoppolo threw eight times.

“They’ve been very explosive in their running game lately. We’ve just got to be fundamentally sound. We’ve got an extra week to prepare so we’ve been practicing and hopefully it shows up on Sunday.”

A bittersweet celebration: Hitchens, family thrilled to be at Super Bowl but missing dad who died in December

The Chiefs defense ranked 17th overall during the regular season, 26th against the run (128.2 yards a game). But Hitchens has seen a different unit lately as it’s adjusted to new coordinator Steve Spagnuolo and sharpened the focus. They held red-hot Titans running back Derrick Henry to 69 yards and 3.6 a carry in the AFC title game.

“Same thing we’ve done to stop Henry, just have to play fundamental, downhill football,” Hitchens said of facing the 49ers and Raheem Mostert, who had 220 rushing yards vs. the Packers. “We have to be physical. When you’re not physical, you give up yards. It’s going to be another mindset game.

“We go into games to stop people. Our main goal if we want to win this game is stop the run.”

Hitchens was picked as a playoff captain, and in his second season since signing as a free agent with the Chiefs he’s one win away from accomplishing his goal.

“I was trying to be a part of something great right now,” he said of leaving the Cowboys. “With (quarterback) Patrick Mahomes coming up, I was just trying to be that guy to lead the defense in the right direction. Didn’t really do it last year, but with a couple other guys with the same mindset as me, we picked it up this year.”

By the nature and title of his position, Hitchens is consistently in the middle of the action. He’ll play a key role in whether the Chiefs win their first Super Bowl since 1970. They hadn’t been back to the big game since then, and the Kansas City crowd delighted in the return trip.

Hitchens will never have more eyes on him than Sunday. One thing the people won’t see is him carrying hefty coach Andy Reid off the field in celebration.

“That’s a little above my pay grade,” Hitchens said. “I don’t want to drop Coach. Maybe we’ll stick to pouring the Gatorade over his head.

“He’s going to be one of the greatest to ever coach. And to be able to say I played for him is going to be an honor.”

A bittersweet celebration: Clearview’s Anthony Hitchens in Super Bowl, but family missing father who died in December
Kevin Stefanski says he has “big plans” for TE David Njoku, but first he must live up to potential in “big year” for his future in Cleveland