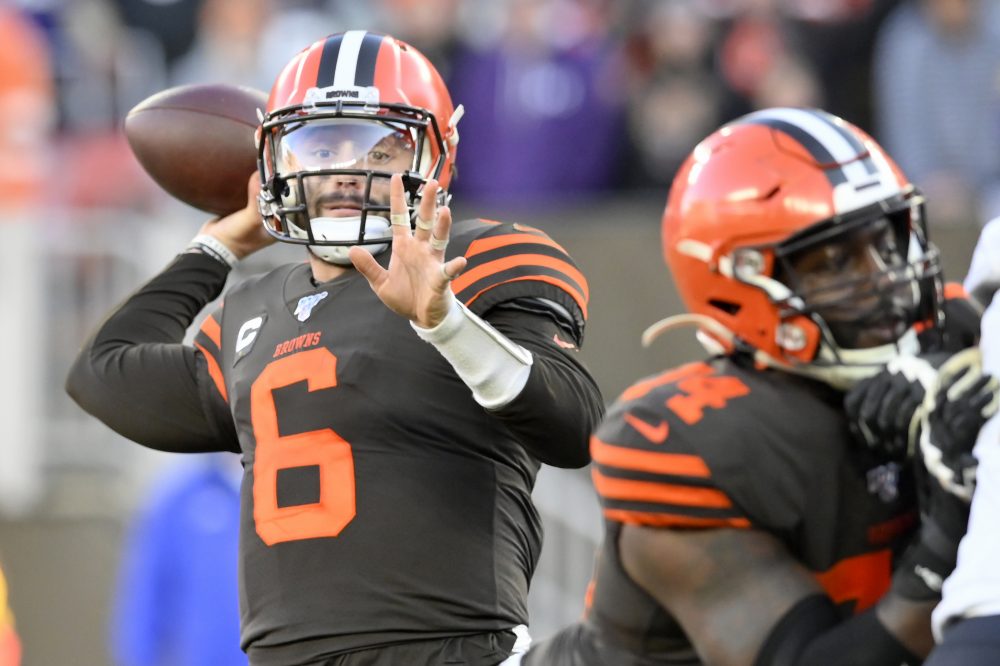 Welcome to the start of the most important year in Baker Mayfield’s career.

So far, there’s been no middle ground.

So far, he’s looked like THE GUY in one year and a guy in the other. Year 3 will be the tiebreaker. Year 3 will either reinvigorate and validate his swashbuckling “I woke up feeling dangerous” persona, or it will reinvigorate the Johnny Manziel comparisons.


So Mayfield has a lot riding on the 2020 season, and the Browns have even more than that riding on Mayfield. Because even if Kevin Stefanski reveals himself to be a budding Bill Belichick, if Mayfield lays a second consecutive Johnny Goofball-sized egg, the yoke will be on the Browns, and John Dorsey will be glad he’s yesterday’s news.

The Browns’ hopes in 2020, not to mention the future of Stefanski, and the latest batch of front office spreadsheet jockeys, lies in large part on how the quarterback performs.

The quarterback, apparently and fortunately, knows it.

Appearing Friday on ESPN’s morning jamboree of jabbering jocks “Get Up,” Mayfield nearly pulled a hamstring while copping a plea.

“I put my foot in my mouth a lot this past year,” he confessed to the gleeful panel.

One member of the glee club was former NFL coach Rex Ryan, who at one point last year said Mayfield was “overrated as hell.” That led to some long-distance back-and-forth between Ryan and the beleaguered Mayfield, who had his hands full as one of the ringleaders in, and reasons for, the Browns’ fast-disintegrating season.

Hopefully it will be a therapeutic reboot for Mayfield, who, to be honest, was far from alone in being a major underachiever on the NFL’s most underachieving team of 2019. Plenty of teammates were equally askew.

But Mayfield is the quarterback, the presumed leader on the field. Nobody’s idea of leadership in a quarterback includes 21 interceptions, 40 sacks and ranking 31st out of 32 qualifiers in completion percentage, while simultaneously putting his foot in his mouth “a lot.”

It seems more likely that it was a speed bump, but these are the Browns, so we assume nothing.

For now, what’s encouraging is that Mayfield is not in denial. He acknowledges that he was part of the problem and was incapable of GPS-ing his way anywhere close to being part of the answer.

In a season that went up in flames, no player’s dossier came out of it more charred than Mayfield’s. It was a massive dose of humble, a heaping cup of comeuppance, for someone with grandmaster swag.

And opposing teams thoroughly enjoyed every minute of it, including and especially the roving bands of 49ers defensive players who held Mayfield to an 8-for-22 passing performance, two interceptions, four sacks and a passer rating of 13.4 in a 31-3 nationally televised humiliation that was an early indicator that the Browns were going to need a bigger boat.

Indeed, one could rightfully argue that no Browns player’s resume came out of the 2019 season with more welts than Mayfield’s. To his credit, he did exhibit extraordinary toughness, answering the bell for all 16 bruising starts, behind an offensive line whose performance ran the gamut from inept to invisible.

That Mayfield physically survived the season is perhaps the greatest achievement of his two-year career.

He was an electrifying gunslinger in his first year in the league, and a helpless punching bag in his second. What’s next, in his third? He’s already given us a preview with his remarks on “Get Up” that he intends to tone down the smack talk.

That’s why God invented wide receivers. Mayfield can let them handle that, because he’s already got plenty on his plate. Better still, he seems to realize it. At age 24, with his third year as an NFL quarterback beckoning, Mayfield is at a crossroads.

Another clunker of a season in 2020 and by the end of it he’ll wake up feeling vulnerable, not dangerous. The NBA isn’t the only make-or-miss league. The NFL is, too. Especially for quarterbacks. You’ve either got it and get it, or you get out.

The world loves a cocky winner.

The world yawns at a noisy loser.

Ingraham: Abnormal offseason is normal for disorganized, dysfunctional Browns
A to-do list for new GM Andrew Berry as he tries to catch up