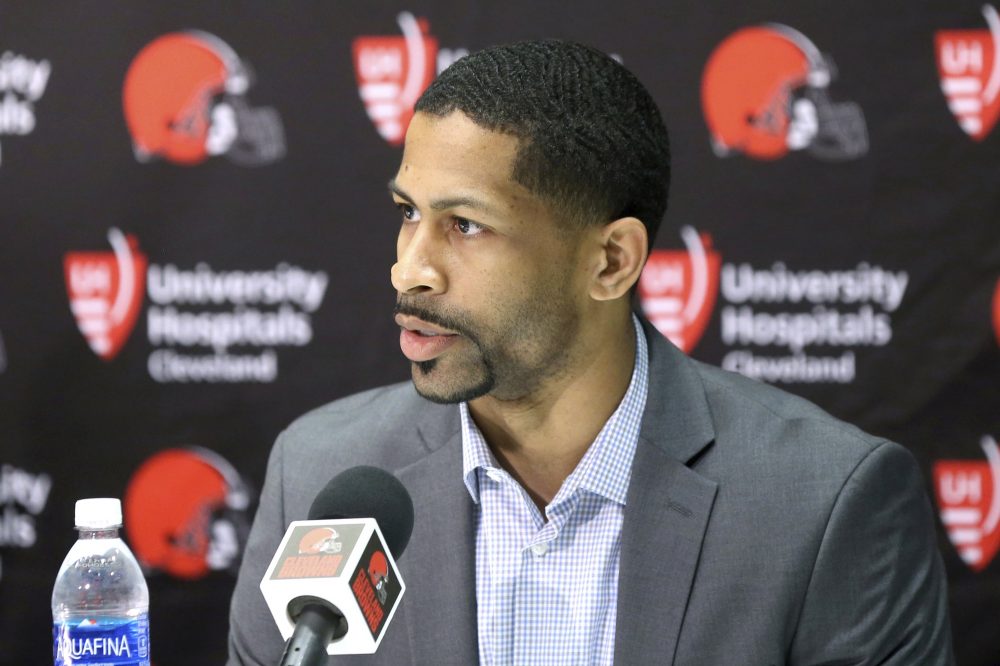 To say new general manager/executive vice president Andrew Berry has a daunting task in front of him is a huge understatement. Not only have owners Dee and Jimmy Haslam fired the last five men to hold Berry’s position after two seasons or less, the Browns haven’t been to the playoffs since 2002.

Berry has a bit of a head start after working for the Browns from 2016-18 as vice president of player personnel. He knows the roster, scouts and people in the personnel department — those who remain after assistant general manager Eliot Wolf, vice president of player personnel Alonzo Highsmith and director of college scouting Steve Malin parted ways with the organization last week after Berry was hired — which reduces the learning curve a different GM hire would’ve experienced.

But Berry began his new job Jan. 28 behind the competition. He hadn’t been inside Browns headquarters for a year, was still employed by the Philadelphia Eagles during the college all-star games and must learn the numerous new players added since he left.

Berry’s list of things to do is surely longer than the infamous Browns quarterback jersey, but here are a few of the most pressing items on it.

General manager John Dorsey, who parted ways with the organization Dec. 31 when he refused to accept a reduced role, knew which Browns free agents-to-be he wanted to retain and which he was willing — or happy — to let leave.

Berry, who’s scheduled to talk to the media Wednesday at 11 a.m., doesn’t have that luxury. Free agents can begin negotiating with other teams March 16, so the clock is ticking if Berry wants to re-sign anyone.

Middle linebacker Joe Schobert must be the first evaluation. He was a Pro Bowler in 2017 and a second alternate this year. He wants to stay, is a hard worker and proved to be more than just a tackle machine. He was the NFL’s only player this year with 120 tackles, two sacks, four interceptions and two forced fumbles.

Linebacker is already a question — Christian Kirksey hasn’t stayed healthy to live up to his contract and could be cut, and 2019 third-round pick Sione Takitaki didn’t do much as a rookie — so keeping Schobert makes sense. Berry was part of the regime that drafted him in the fourth round in 2016 and could be inclined to keep him.

Randall missed time with injuries and burned some bridges, so he’s a long shot to return. An upgrade is needed over Robinson. Murray played well before knee surgery and could be kept at safety, where reinforcements are needed. Higgins wasn’t liked by the previous regime but could get another chance on a cheap deal.

Berry will also have a decision to make about running back Kareem Hunt, who’ll be a restricted free agent. If Hunt’s off-field history, which includes a recent traffic stop where he admitted he would fail a drug test, isn’t a deal-breaker, Berry will choose between placing a first- or second-round tender on him. Either way, the Browns would be likely to keep him.

The roster was much improved in 2019 but far from a finished product. With an estimated $50 million in salary cap space, Berry can afford to spend on the free agent market.

First, he must identify the biggest needs. So he should be spending as much time as possible watching the Browns’ game film from 2019.

He’ll notice holes at tackle, safety, linebacker, tight end and fullback. If he cuts defensive end Olivier Vernon so he doesn’t have to pay the $15 million salary, end becomes a priority.

Step 2 is finding upgrades in free agency. Berry should start with tackle, where Tennessee’s Jack Conklin and Green Bay’s Bryan Bulaga are top options at right tackle. The safety market is also intriguing, and San Francisco’s Jimmie Ward has experience with Joe Woods, who will be named defensive coordinator.

Berry tried to keep Wolf but couldn’t. Highsmith and Malin were headed for the door as soon as Berry was hired.

Without those three, there’s a vacuum at the top of the personnel department. Berry needs a right-hand man or two as he tries to cram before free agency and the draft.

The preference would be to add help as soon as possible — Dorsey was able to get Wolf and Highsmith shortly after becoming GM — rather than waiting until after the draft, when a lot of movement happens in personnel departments across the league.

Berry has the advantage of knowing the scouts and Dorsey’s scouting system from his previous time in Berea. That removes a couple of hurdles in the transition.

But the late arrival cost Berry precious time being with the scouts as the preparation for the combine and draft began. The college all-star games, including the Senior Bowl, have already passed, and he will have to work to blend his opinions with those of the scouts.

The combine starts in less than three weeks, so a plan must be put in place for how the Browns will approach the crucial draft process. They have seven draft picks, including No. 10 and two in the third round.

Commentary: Baker Mayfield approaching make-or-break season, and says he’ll do it with more humility
Commentary: Another introductory news conference — been here, heard that before