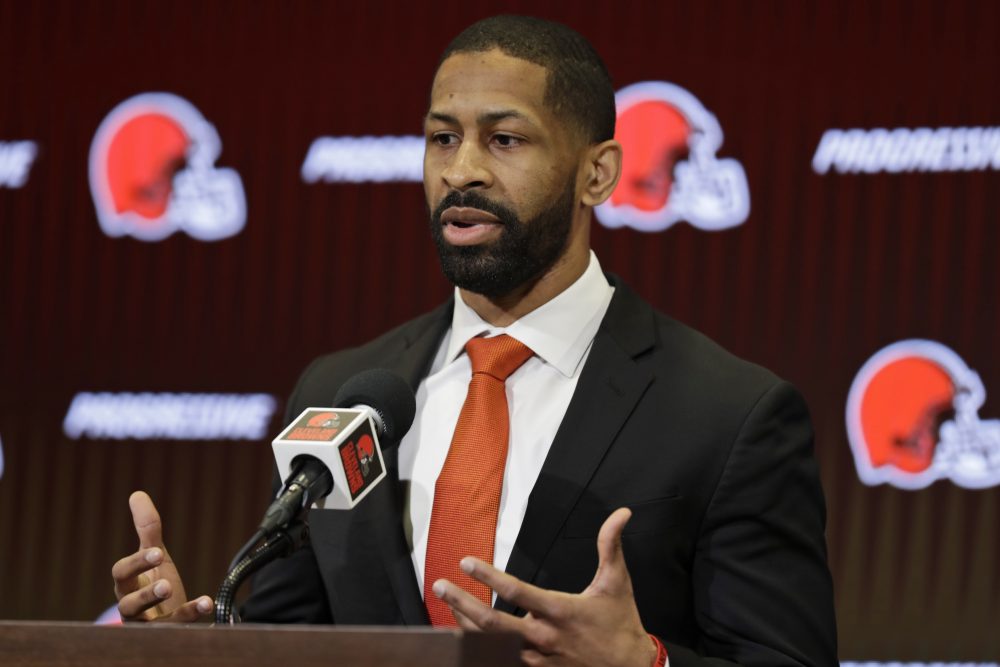 BEREA — As the youngest general manager in NFL history, Andrew Berry should signal a fresh start for a Browns organization in which losing and constant turnover have become part of the DNA.

But Berry brings baggage even at 32 years old. He was an integral part of the Browns’ historically bad 1-31 stretch in 2016-17, serving as the top football executive under head of football operations Sashi Brown, who had final authority.

Berry didn’t hide from his past.

“The reality of it is, that stretch is a very painful period for our fans, for the city and for everybody internally in the organization,” he said Wednesday after being introduced as executive of football operations and general manager. “I can assure you that all of us that were there during that time period were equally disappointed with the results during that time.


“Now, the one thing I can say is that the team and the organization is at a much different state than it was heading into that 2016 season, whether it was the foundation of the roster or the overall strategy. There is no secret that the strategy at the time was to accumulate assets, whether it was cap space, picks and players, that would lead to a foundation of long-term success, but I can assure you that winning is at the forefront of everyone’s minds in the organization. We are looking forward to pursuing that over the next several months.”

The philosophy of Brown may have been the correct one, but the execution was flawed. The Browns passed on quarterbacks Carson Wentz, Patrick Mahomes and Deshaun Watson and missed on early round draft picks in receiver Corey Coleman, tackle Shon Coleman and quarterbacks Cody Kessler and DeShone Kizer.

Berry was asked his role in picking Coleman and not picking Watson.

“I am not going to go into any specific player decisions, but what I can say is even during that time period, it was a collaborative environment with the aim of getting the best information on the table,” said Berry, who was vice president of player personnel for the Browns from 2016-18 before spending last season as VP of football operations for the Eagles. “Being among the senior leaders in that group, just as you may share some credit with some of the successes, you also have to share some culpability with things that do not go as well, and that is not something that I am going to hide from or run from, but I am looking forward to certainly establishing my own track record as the primary decision-maker moving forward.”

Berry referenced the five general managers he’s worked under, including “a visionary who was probably a few years ahead of his time.” He didn’t mention Brown by name there, but it sounded like that’s whom he meant.

For all the haters of Brown and the reliance on analytics, Berry stressed the importance of traditional scouting in his approach.

“Now listen — I want to make this very clear because I know a lot has been rumored and said about this topic — we will be a scouting-centered front office because I have always believed and I continue to believe scouting to be the lifeblood of roster building in the NFL,” he said. “We also are going to incorporate information, research and insights into our decision-making.

“We would be silly not to push on every area that can give us a competitive advantage as we make decisions.”

Berry was joined by his wife, Brittan, sons Zion and Kairo, parents, twin brother, sister-in-law and sister. The baby cried at times as he was covered in a carrier with a Browns blanket.

“My wife and I, we spent three fantastic years here in Cleveland, and living here helped us understand how much this team means to Northeast Ohio,” Berry said. “I am honored to be a steward of the organization.”

Owners Dee and Jimmy Haslam watched the news conference from the side of the podium. They’ve been big fans of Berry since his first stop in Cleveland.

“He is very smart. He is tremendously results-driven. He has a great work ethic, tremendous integrity and really, despite his young age, a great background in football personnel,” Jimmy Haslam said. “We are delighted to have him back.”

Haslam recalled a conversation with former Colts GM and Pro Football Hall of Famer Bill Polian when the Browns were considering hiring Berry in 2016. Berry got his start with the Colts after graduating from Harvard with a bachelor’s degree in economics and a master’s in computer science.

Berry said his record youth doesn’t mean anything unless the Browns have success. Not only is he a big fan and good friend of coach Kevin Stefanski, who was hired Jan. 13, he likes the roster.

“If there is anything that I want to be defined by, it is aggression. We want to aggressively acquire talent because that is the name of the game from an NFL front office perspective, and we are going to explore every avenue that enables us to do that.”

Berry worked for a year under GM John Dorsey, who parted ways with the Browns on Dec. 31 when he declined to take a diminished role. So he was part of the process when quarterback Baker Mayfield was selected No. 1 in 2018 and cornerback Denzel Ward No. 4.

But Berry was adamant he doesn’t care who acquired the players.

“All of our players are Browns,” he said. “It is not about how they were acquired, who drafted them or who signed them. They are all Browns, and we intend to embrace all of our players that way. It is not a ‘my guy’ or ‘his guy.’”